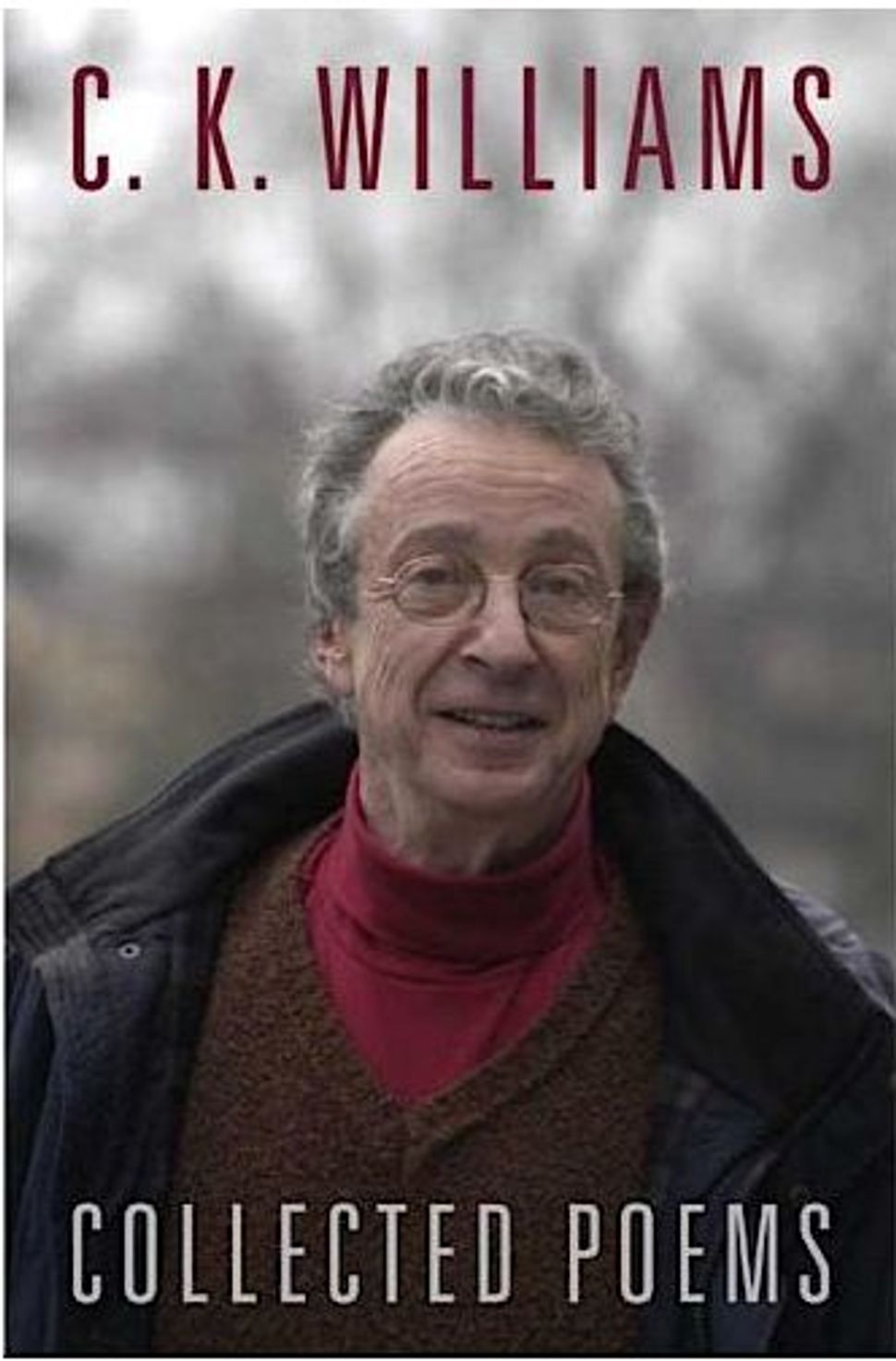 “Jew On Bridge” appears in Williams’s recent collection, “Wait.” The poem is an epic-length meditation, at the core of which lies the question, “How Jewish am I?” As the poet swirls between Dostoyevsky’s implicit anti-Semitism, the tragic fates of Paul Celan and Walter Benjamin, as well as his own vague, somewhat uncomfortable notion of Jewishness, he finally narrows in: “Your suffering is Jewish. Your resistant, resilient pleasure in living, too.”

That, but also, throughout the poem, the Holocaust and the anti-Semitism of the admired author colors Williams’s notion of Jewishness. Whether this sentiment appeals to you, or appears flat in its limitations, perhaps you’ll be compelled by the poem’s setting, perfect for such a discussion. The bridge, which is meant to join disparate sides and make transitions smooth, here becomes the opposite. The sight is a reminder of Celan’s suicide (he jumped off a bridge to his death in the Seine), triggering an identity crisis, and finally, a rupture.

Raskolnikov hasn’t slept. For days. In his brain, something like white.
A wave stopped in mid-leap. Thick, slow, white. Or maybe it’s brain.
Brain in his brain. Old woman’s brain on the filthy floor of his brain.

His destiny’s closing in. He’s on his way, we’re given to think, though
he’ll have to go first through much suffering, to punishment, then redemption.
Love, too. Punishment, love, redemption; it’s all mixed up in his brain.

Can’t I go back to my garret, to my filthy oil-cloth couch, and just sleep?
That squalid neighborhood where he lived. I was there. Whores, beggars,
derelict men with flattened noses: the police break their noses on purpose.

Poor crumpled things. He can’t, though, go back to his filthy garret.
Rather this fitful perambulation. Now we come to a bridge on the Neva.
Could you see the sea from there then? I think I saw it from there.

Then, on the bridge, hanging out of the plot like an arm from a car,
no more function than that in the plot, car, window, arm, even less,
there, on the bridge, purposeless, plotless, not even a couch of his own: Jew.

On page something or other, chapter something, Raskolnikov sees JEW.
And takes a moment, a break, you might say, from his plot, from his fate,
his doom, to hate him, the Jew, loathe, despise, want him not there.

Jew. Not as in Chekhov’s ensemble of Jews wailing for a wedding.
Not Chekhov, dear Chekhov. Dostoevsky instead, whom I esteemed
beyond almost all who ever scraped with a pen, but who won’t give the Jew,

miserable Jew, the right to be short, tall, thin or fat Jew: just Jew.
Something to distract you from your shuttering tunnel of fate, your memory,
consciousness, loathing, self-loathing, knowing the slug you are.

What’s the Jew doing anyway on that bridge on the beautiful Neva?
Maybe he’s Paul, as in Celan. Antschel-Celan, who went over the rail of a bridge.
Oh my Todesfugue, Celan is thinking. The river’s not the Neva, but the Seine.

It’s the bridge on the Seine where Jew-poet Celan is preparing himself.
My Deathfugue. My black milk of daybreak. Death-master from Germany.
Dein goldenes Haar Marguerite. Dein aschenes Haar Sulamith. Aschenes-Antschel.

Was it sunrise, too, as when Raskolnikov, sleepless, was crossing his bridge?
Perhaps sleepless is why Raskolnikov hates this Jew, this Celan, this Antschel.
If not, maybe he’d love him. Won’t he love the prisoners in his camp?

Won’t he love and forgive and cherish the poor girl he’s been tormenting?
Christian forgiveness all over the place, like brain on your boot.
Though you mustn’t forgive, in your plot, Jew on bridge; Deathfugue on bridge.

Celan-Antschel goes over the rail. As have many others before him.
There used to be nets down near Boulogne to snare the debris, the bodies,
of prostitutes, bankrupts, sterile young wives, gamblers, and naturally Jews.

Celan was so sick of the Deathfugue he’d no longer let it be printed.
In the tape of him reading, his voice is songful and fervent, like a cantor’s.
When he presented the poem to some artists, they hated the way he recited.

His parents had died in the camps. Of typhus the father. Mama probably gun.
Celan-Antschel, had escaped. He’d tried to convince them to come, too.
Was that part of it, on the bridge? Was that he wrote in German part, too?

He stood on the bridge over the Seine, looked into the black milk of dying,
Jew on bridge, and hauled himself over the rail. *Dein aschenes Haar…
Dostoevsky’s Jew, though, is still there. On page something or other.

He must be waiting to see where destiny’s plotting will take him. It won’t.
He’ll just have to wait there forever. Jew on bridge, hanging out of the plot.
I try to imagine what he would look like. My father? Grandfathers? Greats?

Does he wear black? Would he be like one of those hairy Hasids
where Catherine buys metal for her jewelry, in their black suits and hats,
even in summer, shvitzing, in the heat? Crackpots, I think. They depress me.

Do I need forgiveness for my depression? My being depressed like a Jew?
All right then: how Jewish am I? What portion of who I am is a Jew?
I don’t want vague definitions, qualifications, here on the bridge of the Jew.

I want certainty, science: everything you are, do, think; think, do, are,
is precisely twenty-two percent Jewish. Or six-and-a-half. Some nice prime.
Your suffering is Jewish. Your resistant, resilient pleasure in living, too,

can be tracked to some Jew on some bridge on page something or other
in some city, some village, some shtetl, some festering shvitz of a slum,
with Jews with black hats or not, on their undershirts fringes or not.

Raskolnikov, slouching, shoulders hunched, hands in his pockets,
stinking from all those sleepless nights on his couch, clothes almost rotting,
slouching and stinking and shivering and muttering to himself, plods on

past the Jew on the bridge, who’s dressed perhaps like anyone else—
coat, hat, scarf, boots—whatever. Our hero would recognize him
by his repulsive, repellent Jew-face daring to hang out in the air.

My father’s name also was Paul. As in Celan. His father’s name: Benjamin.
As in Walter. Who flung himself from life, too, with vials of morphine.
In some hotel from which he could have reached safety but declined to.

Chose not to. Make it across. Though in fact none of us makes it across.
Aren’t we all in that same shitty hotel on that bridge in the shittiest world?
What was he thinking, namesake of my grandpa? Benjamin, Walter, knew all.

Past, future, all. He could see perfectly clearly the death he’d miss out on.
You’re in a room. Dark. You’re naked. Crushed on all sides by others naked.
Flesh-knobs. Hairy or smooth. Sweating against you. Shvitzing against you.

Benjamin would have played it all out in his mind like a fugue. Deathfugue.
The sweating, the stinking. And that moment you know you’re going to die,
and the moment past that, which, if you’re Benjamin, Walter, not grandpa,

you know already by heart: the searing through you you realize is your grief,
for humans, all humans, their world and their cosmos and oil-cloth stars.
All of it worse than your fear and grief for your own minor death.

So, gulp down the morphine quickly, because of your shame for the humans,
what humans can do to each other. Benjamin, grandfather, Walter;
Paul, father, Celan: all the names that ever existed wiped out in shame.