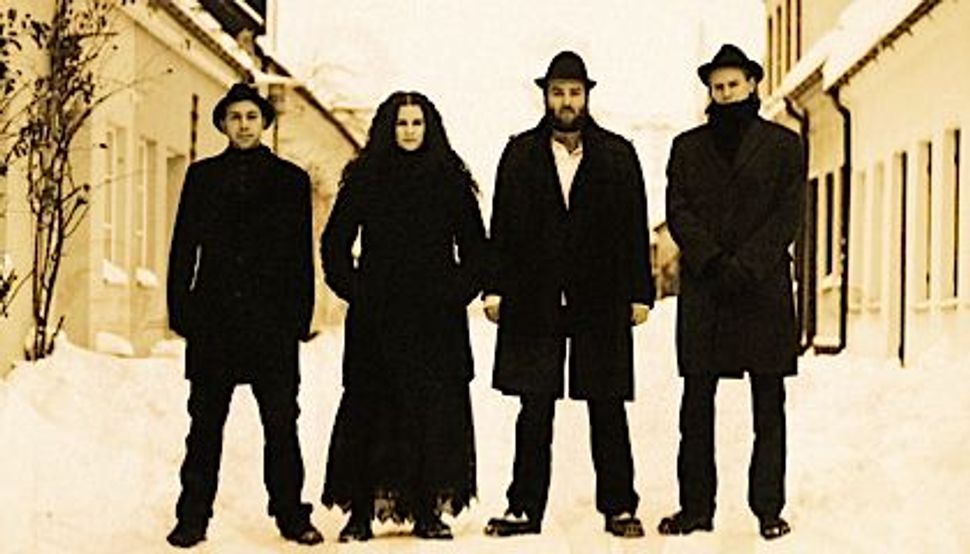 It’s almost too fitting that the band Dibbukim comes from Sweden. I don’t know that much about metal, but in my research I’ve found out that the country is home to such bands as Opeth, Amon Amarth, and Hammerfall. I’ve also watched a few episodes of the Adult Swim cartoon Metalocalypse, which, with Skwisgaar Skwigelf as lead guitarist of the fictional band Dethklok, reinforces the impression of Sweden as a mecca of heavy music.

What seems less fitting is that Dibbukim’s songs are not just in Yiddish, but are re-worked versions of Yiddish classics. On their first full-length album, “Az a Foygl un a Goylem Tantsn” (“As a Bird and a Golem Dance”), the Skåne län-based quartet takes such chesnuts as Itzik Manger and Abraham Ellstein’s “Yidl Mitn Fidl,” Abraham Goldfadn’s “Rozhinkes Mit Mandlen” and Herman Yablokoff’s “Papirosn,” and turns these familiar songs into guitar-heavy scream fests.

Dibbukim is just one of several bands who have been reinterpreting the cannon of Yiddish folk, theater and art songs in bold ways. Other recent efforts include the ‘80s power pop of Yiddish Princess, and the Germanic industrial metal of the Israeli band Gevolt, whose latest album, “AlefBase,” was released earlier this year. Is it surprising that these projects exist? Maybe a little, but genre mix-and-match is a game many can play. What’s really surprising is just how well this experiment works.

Melding Jewish music with other forms isn’t a new thing; much contemporary Jewish music is really Jewish fusion. Yiddish music, particularly klezmer, was combined with jazz almost as soon as it arrived in America, earning the moniker “Jewish jazz.” And combinations of Jewish music with everything from hip-hop to trance have proliferated in the past few decades.

Bands like Dibbukim and Gevolt stand out, however, not just because of the strangeness of their idea, but because of the seamlessness of the results. As Adi Mahalel noted in a piece in last week’s Foverts, it’s natural to question whether a band like Gevolt is no more than a novelty gag. Yet he concludes that they are a sincere effort to reinterpret Yiddish material in an effective way. Part of their success is thanks to the artists’ arrangements, but that’s not all there is to it. Strangely, there seems to be a natural affinity between Yiddish and metal.

The reason for this, I believe, is that both are, in essence, sentimental art forms. That may seem more intuitive when it comes to Yiddish music, which is renowned for its heart-tugging quality, and less so when it comes metal, with its purposeful abrasiveness. Yet both genres share an emotional directness that binds them together.

This idea is not mine alone. In his excellent 2007 book on Céline Dion, “Let’s Talk About Love: A Journey to the End of Taste,” Canadian critic Carl Wilson makes a similar comparison between the overpowering, and perhaps sickening sweetness of Dion’s music, and the equally overpowering bitterness of metal. “It’s been said that ‘pro wrestling is soap opera on steroids,’ so maybe Céline Dion is metal on estrogen,” Wilson writes. “Metal is all darkness and rebellion and Céline all candlelight and communion, but note how hypermasculinity and hyperfemininity in this way can meet.”

The same dichotomy is not identically applicable in the case of Yiddish music, which one might say is more schmaltz herring and honey cake than “candlelight and communion,” but the concept holds. People listen to music for a variety of reasons, but one of the most fundemental is simply to feel feelings, and to feel them strongly. Both Yiddish and metal music appeal to that kind of visceral response, sometimes in similar ways. As Mahalel points out, Gevolt’s version of Hersh Glick’s Vilna Ghetto partisan anthem “Zog Nit Keynmol” evokes the “With pistols in hand” of the song’s fourth stanza better than most other renditions.

Despite their sincerity, however, it’s unlikely that bands like Gevolt and Dibbukim will be more than curiosities. Ironically, this has less to do with the fact that they sing in Yiddish than it does with the reality that metal itself is now more of a niche genre than a mainstream taste. Yet they succeed in illustrating the inherent potential of Yiddish music to be not just sentimental, but also brash and unabashed.