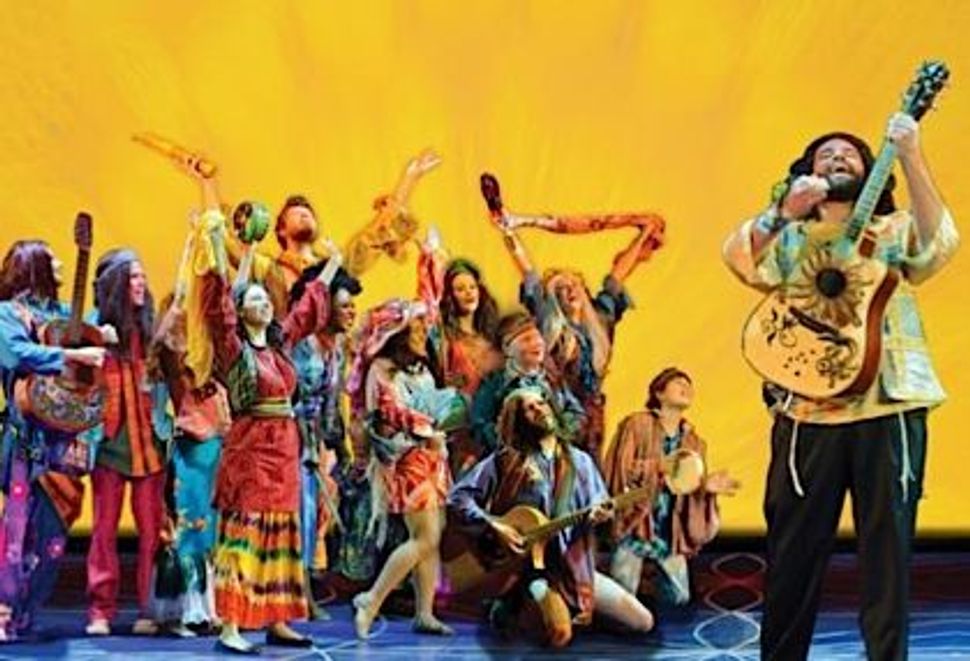 At one point in the musical “Soul Doctor,” an actor says, “There are two types of Jews. Those who have heard of Shlomo Carlebach and those who haven’t — yet.” For either type, “Soul Doctor: The Journey of a Rockstar-Rabbi” can be an enlightening experience.

During his lifetime, Carlebach was known as “The Singing Rabbi” for his use of joyous, Hasidic-inspired music to engage those he called “lost Jewish souls.” His unorthodox path put him in conflict with his mother and rabbi father, but ultimately made him the charismatic legend he became. If “Fiddler on the Roof” is about tradition, “Soul Doctor” is about breaking with tradition, even if that meant, as in Carlebach’s case, breaking his father’s heart.

After a five-week run in Miami and Ft. Lauderdale, the biographical show, which bills itself as “pre-Broadway,” could benefit from some judicious nipping-and-tucking. The play compresses Carlebach’s 69 years into a two-act play with 37 scenes, performed by a cast of 18 and featuring 30-plus musical numbers. The play’s co-creator and associate director, David Schechter, wrote some of the lyrics, but most of the songs are Carlebach’s.

The play, which begins with Carlebach’s childhood and touches on significant moments along his path, limps into life, relying on a series of Jewish one-liners that delighted a Saturday-night Ft. Lauderdale audience but which may elude non-Jewish theatergoers.

Midway through Act One, the energy level soared with the appearance of Erica Ash as Nina Simone, who helped inspire Carlebach — embodied by a big-voiced Eric Anderson — to widen his reach and follow his instincts. Ash (who played Nala in Broadway’s “The Lion King”) is a thrilling performer whose voice alone is worth the price of admission. The scenes in which she and Anderson play off each other are the show’s best.

A talented cast makes the most of Neil Patel’s simple, functional set, which relies heavily on a fretwork balcony and fire-escape-style staircase. Choreographer Gerry McIntyre adds some lively dance scenes, but the play suffers from too many static moments when actors have little to do beyond facing one another and reciting their lines.

That is not the case once the action moves to San Francisco, where Carlebach opened the House of Love and Prayer and invited lost and drug-addicted flower children to get high on prayer. That period, in the mid-1960s, was perfectly timed, ushering in a generation ripe for rebellion.

The play is burdened by the challenge of making one man’s life universal but, relying on its theme of forging one’s own way in the world, the message resonates. So, too, does Carlebach’s tortured relationship with his mother (Liz Larsen, in a wheelchair, having broken her ankle) and father (Mike Burstyn, after country-music star and “Les Misérables” veteran Gary Morris left the show), who can’t accept their son’s repudiation of their traditional Orthodox beliefs and practices, which included a ban on men and women worshiping together.

Cameo roles representing celebrities with whom Reb Shlomo mingled include a look-alike John Denver singing “Thank God I’m a country goy” and drug guru Timothy Leary, and they serve as reminders of the diverse circles he inhabited. More than a decade after Carlebach’s death his music can be heard in churches and gospel choirs, as well as in synagogues. “Soul Doctor” offers glimpse of the path that led them there.