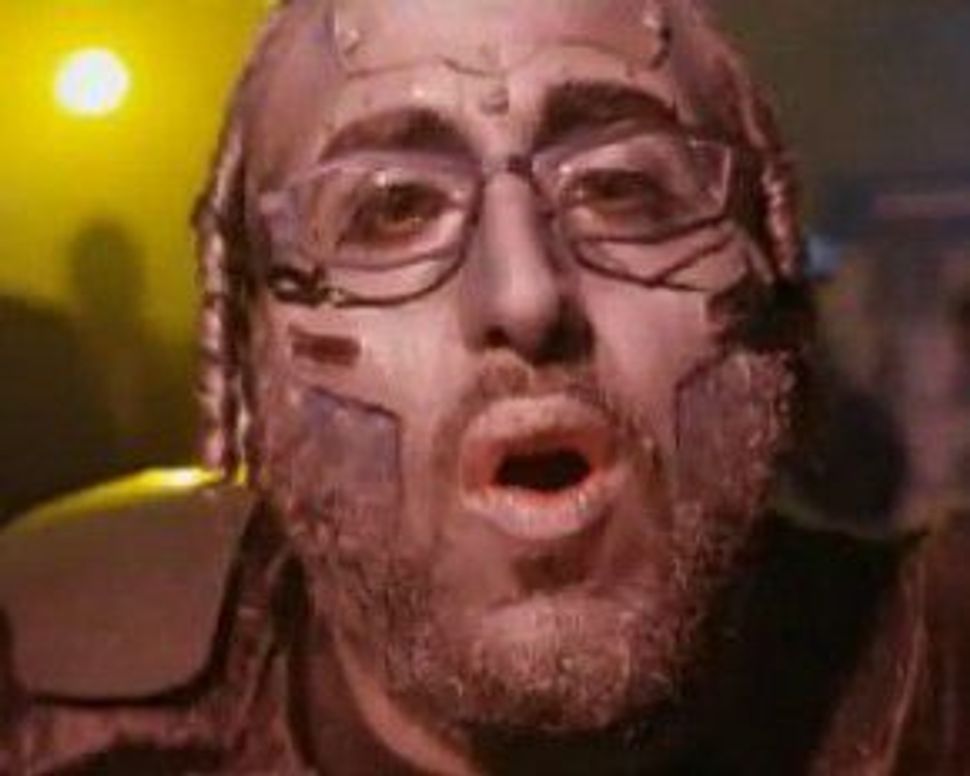 The video is a study in contradictions. So much so that, as Josh Nathan-Kazis observes, it enters into the Uncanny Valley between Hasidic and mainstream culture. With its pop sounds and Lady Gaga imagery it’s an affront to the Haredi establishment, whose worst fears about outside influence it confirms. That would be the same establishment that successfully shut down Lipa’s “Big Event” at Madison Square Garden in 2008, making the video even more of a provocation.

But the lyrics! Oy. “The gadgets make us lazy / We gotta take it easy / uh uh oh / Can you hang up the phone?” Is there a more culturally conservative, moralistic message than that? Apparently, according to Lipa Schmeltzer, technology is eroding the fabric of our civilization. (Quick! Someone alert Ann Landers!) Watch clips of Orthodox apologist Eytan Kobre at the recent anti-Internet Asifa at Citi Field, and it sounds like much the same thing. Ugh.

In a way, I feel for Lipa. It’s obvious that he’s dissatisfied by the banality of Haredi music, and wants to bring in mainstream pop. But that option isn’t fully available to him, unless he breaks with Orthodoxy, which would entail personal upheaval and the loss of his audience, or achieves an unlikely crossover success. Neither seems possible, so instead he pushes the envelope stylistically while keeping the message conservative. The result is there to see.

What bothered me more than the video, however, were the reactions to it. Most people I know, or read, thought of it as I did — emblematic of tensions within the ultra-Orthodox community, rather than just a pop song to be listened to and enjoyed. Except that instead of disappointed, they were amused. Lipa is a sideshow, and they treated him as such. It is, as Gawker put it, where the “Hasidic and robotic meet.”

I am the last one to defend the abuses and absurdities engendered by ultra-Orthodox extremism, dogmatism and insularity. And Lipa deserves credit for pushing against those boundaries. But as a former member of that community I also know there is beauty in the Orthodox tradition — a beauty many Jewish artists, secular and religious, draw on today. Take Andy Statman, an Orthodox Jew whose work reverberates with religious feeling, and who was recently awarded a National Heritage Fellowship in recognition of his talents. Does Gawker care about him? It’s Lipa’s shenanigans they pay attention to.

I’m not so naïve as to think that the klezmer and bluegrass stylings of a virtuoso clarinet and mandolin player are going to have the same viral success as the weird dress-up of a Hasidic pop star. But the light mockery of Lipa smacks of condescension. Lipa’s work is bad, but I think it’s wrong to take the most ridiculous example of any community and hold it up as representative. Lipa is an exception to Hasidic culture in many ways, but no post about him has failed to mention that aspect of his identity right at the top. Without it, who would even care?

One of my complaints against the ultra-Orthodox world is its disregard for the arts, and the easy tolerance of mediocre entertainment, so long as it upholds religious standards. It is a minor issue compared with the sexual abuse, financial misdoings, and other ills that plague that community, but it is a personal one. Lipa, to his credit, is only partially toeing that line. But whatever it is he’s doing, he’s not doing a great job of it. I, for one, am not amused.