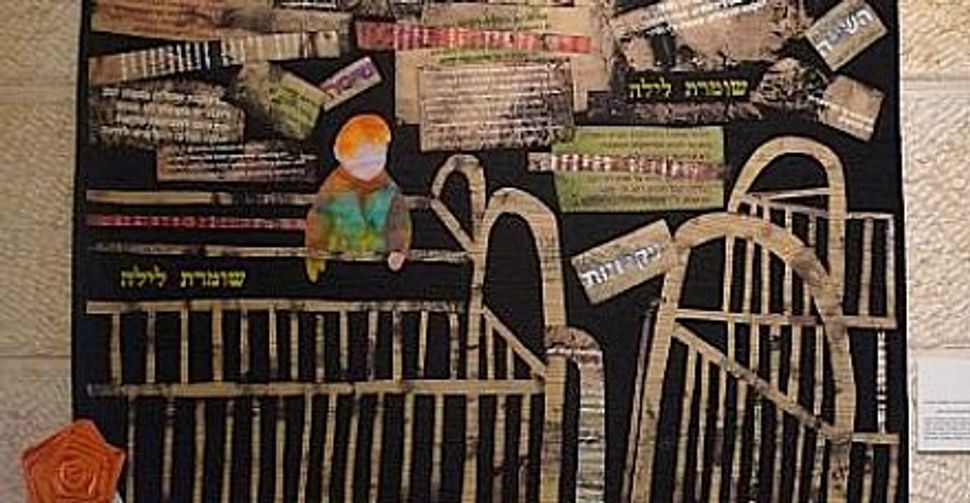 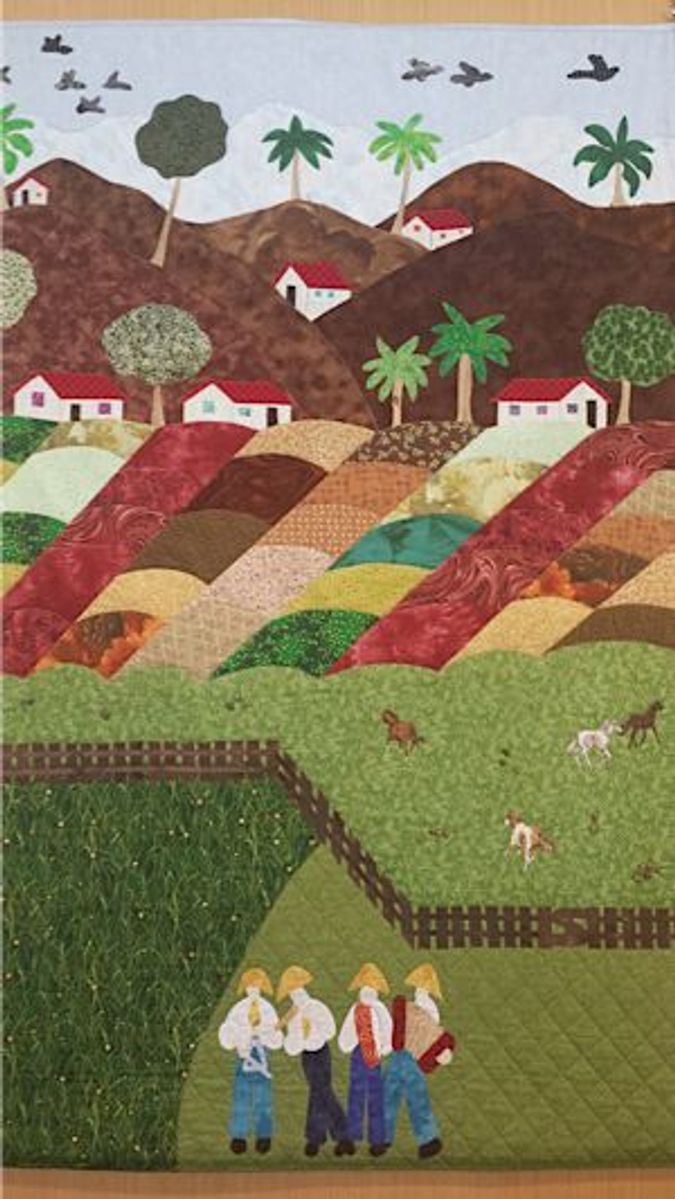 An exhibition of 21 quilts showing until July 3 at the Oshman Family Jewish Community Center in Palo Alto, Calif., stitches together a century of kibbutz life. Some of the quilts, full of colorful fields and small houses, celebrate the 100th anniversary of Israel’s kibbutz movement, while others are embroidered with a more critical eye toward the collective agricultural communities.

The quilts are a selection of a total of 56 that were created by members of the Israel Quilters Association for the centennial in 2010. They were shown together at the 2011 Festival of Quilts in Birmingham, England, marking the first international group exhibition of Israeli quilts.

While the individual quilts reflect the artistic choices and skill of each crafter, they also indicate the lens through which she chose to look back upon an institution that has been the backbone of building of the Jewish State, but has also faced enormous challenges in recent decades. While some of the quilts stand out due to their technical sophistication, others are more noticeable for the statements they make. The few that combine the two attributes capture the most attention.

The most striking among the quilts is “Shared Accommodation, A Reality That Has Passed,” by Bella Kaplan. Unlike the other quilts, with their bright or earthy tones, this one is very dark. In fact, it is predominantly black, depicting nighttime in the kibbutz’s children’s house. The quilt depicts a bygone era in which kibbutz children were raised communally, living exclusively in a house with other children, rather than with their parents. The wooden cribs hover over a small group of faceless children sitting in the bottom right corner of the quilt.

Floating above the scene are many overlapping pieces of text referring to “the principles of the methodology” of communal child rearing. Many of these principles, or instructions, make clear why Kaplan made the choices she did in creating the quilt. One says that babies must be surrendered immediately upon birth to the care of the children’s home staff, another says that fathers may have only one hour with their children per day, and yet another warns that crying babies may be given only sugar water at night.

Other standout quilts are “Play Pen on Wheels” by Eti David, the highly detailed “Degania — 100th Anniversary Impressions” by Ruth Rudnick, and “Vigilant Harvest” by Yemima Lavan, which was inspired by a 1954 photograph of kibbutzniks working the fields with guns slung over their shoulders for protection.

Of particular interest are two quilts depicting the earliest stage of most kibbutzim, which were founded simply by erecting a stockade and watchtower. “A View to the Past — Stockade and Watchtower” by Tamar Ophir and “The Beginning of the Kibbutz” by Ruth Amir both utilize muted, earthy greens, browns and blues with interesting textures to evoke the crude, natural materials used to quickly establish an outpost.

Some quilts, such as “Picture Album (Kibbutz Mizra 1923-2011)” by Ilana Rapaport and “My Grandparents, The Pioneers” by Michal Dvir employ photo transfers of old family photos to document the harsh life of the early kibbutzim, and also to memorialize ancestors who devoted themselves to building a modern Jewish nation through physical labor.

Critically, the exhibit is not all nostalgic recollection or painful memories. It’s also a document of the changing economic landscape of Israel’s kibbutzim. This is most obvious in the literal interpretation of “From Golden Wheat to Golden Computers” by Nechama Richker. Another quilt, “Privatization” by Judith Schonewald, reflects a more sophisticated use of shapes and fabrics to convey more abstractly the kibbutz’s shift from agriculture to industry and commerce — one without which the kibbutz movement may not have survived to reach its 100th anniversary.

Watch a video about patchwork quilting in Israel: