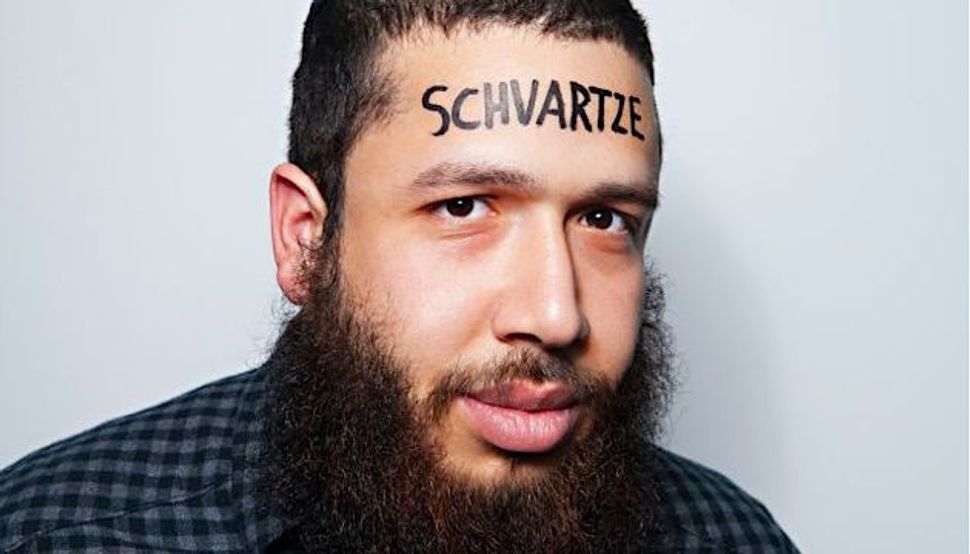 Yeshiva University is reportedly not interested in having its students wear their hearts on their sleeves—or faces, for that matter.

Y.U. administrators put the kibosh on plans by YU and Stern College students to bring Sacramento,California-based photographic artist Steve Rosenfield to campus for his “What I Be” Project, according to Haaretz, Rosenfield, 38, has visited half a dozen other universities for the project, in which he photographs young adults after they have written a word or phrase expressing their greatest vulnerability on either their face, arm or hand (in some cases, all three).

Rosenfield’s portrait of Ben Faulding, a 30-year-old member of Crown Heights, Brooklyn’s Chabad community, has recently been shared widely on social media. Faulding, who has a black father and white mother, chose to have “SHVARTZE” (Yiddish for black, and used in a derogatory way) written on his forehead. He wrote a post about the experience and gave it the title, “I Hate This Word And So I Let A Man Write It On My Face.”

Rosenfield engages in a serious interview with each model about their greatest insecurities before photographing them. “In that 30-minute interview Steve uncovered something that I hadn’t even talked about in two years of therapy,” said Dasha Sominski, a Stern College student who was among those who led efforts to bring the project to Yeshiva University.

Rosenfield photographed Sominski with “I was NOT sleeping” written on her face. The words referred to her having been repeatedly molested as a young girl in St. Petersburg, Russia — a secret she has shared with only a few people in her life until that point.

Yeshiva University decided not to allow the photography project to proceed as originally planned. “As a university based on Torah ideals, Yeshiva University supports and encourages the artistic exploration of diverse ideas by its students and offers robust programming in dramatics and the arts — all while keeping in line with our values,” said Y.U.’s dean of students, Chaim Nissel, in a statement emailed to Haaretz. “After close review and much discussion of this event with the student organizers, and taking the sensitivities of all of our students into consideration, we determined that a Y.U. venue would not be able to showcase the project in its entirety.”

Rosenfield and the students have decided to move forward with the project nonetheless. The photographer has had to adjust his budget, and the students are helping out with costs as much as they can. The project has expanded to include young Jews living in Crown Heights, in addition to students attending Y.U.

The “What I Be” portraits are being posted to Facebook as they are taken, and they will be shown as a collection at Mister Rogers, a Crown Heights art gallery and event space starting February 22.