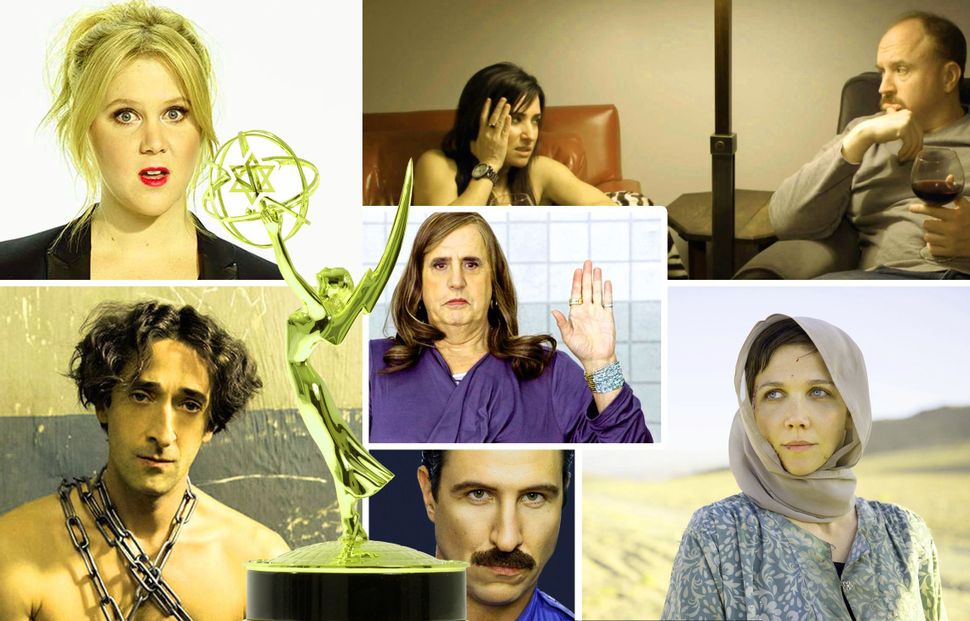 Good news! Sunday night is the 67th annual Emmy Awards, an excuse for you to up your cocktail game, grab your fuzzy slippers and settle in for a night of judging celebrities as they walk down the red carpet.

Nice Jewish Boy Andy Samberg — and — will be hosting the event, and if the following promo video is anything to go by, the ceremony promises to be quite, well, Samberg-esque. Which is to say that we can probably expect some Jewier-than-normal Emmy jokes.

And on the off-chance your Emmy night involves actually watching the Emmys, here’s a list of Jewish — and Jew-ish — nominees for you to root for:

While not technically “Jewish,” “Downton Abbey,” “Mad Men” and “Orange is the New Black” all had Jewish themes going this year, from cousin Rose’s wedding saga to Jewish aristocrat Atticus Aldridge, to the return of Rachel Menken to the zany kosher food/conversion frenzy which took over Litchfield in OITNB Season 3.

“Transparent” has been billed as the Jewiest show of the year – and for good reason. Female rabbis and bar mitzvah crises aside, the show weaves the struggle over what it means to be Jewish into Jeffrey Tambor’s larger identity struggle as a transgender father of three, making it an intrinsic part of the narrative. Creator Jill Soloway even said that the show reflects questions that she herself struggles with: “Am I going to temple, how long am I going to stay, does any of it matter, is any of it real?”

Oh, and we’re counting Louis C.K. as Jewish from now on. (He’s a quarter Jewish, but who’s counting?)

Poor showing for the tribe in drama category. Shout out to Liev Schreiber for bearing the torch.

Despite his Jewish heritage on his father’s side (and his rather large nasal appendage) Adrien Brody reportedly doesn’t feel very Jewish. But Harry Houdini, born Erick Weisz and son of a rabbi, most certainly was.

“The Honorable Woman” saw Maggie Gyllenhaal get in touch with her inner Jewess as Nessa Stein, an Anglo-Israeli businesswoman with some pretty dark secrets.

As trans-parent Maura Pfefferman, Jeffrey Tambor is at once heartbreaking, hilarious and incredibly touching. He’s your Jewish mom and dad, all rolled into one. As his son puts it (albeit in a moment of sexual distress): “Oh, it’s not you. My father is my mother right now and I’m in my head I’m basically afraid I’m never going to have a hard on, like ever.”

In the future, 2015 will be known as the Year of Amy Schumer. No offense to Lisa Kudrow and Julia Louis-Dreyfus, awesome Jewish ladies in their own right, but if Amy doesn’t get this one, I’m voting myself off this island.

It’s not the same without you, Jon.

She’s not Jewish but my vote goes to Christina Hendricks as badass bombshell Joan Harris in “Mad Men.” Her impression of a bubbe offering chicken soup is on point.

Yes. The villain known as “Pornstache” is a member of the tribe (and Liev Schreiber’s half brother!).

Margo Martindale, “The Americans”
Diana Rigg, “Game of Thrones”
Rachel Brosnahan, “House Of Cards”
Cicely Tyson, “How To Get Away With Murder”
Allison Janney, “Masters Of Sex”
Khandi Alexander, “Scandal”

Jewish men of comedy, you’ve been off your game this year. Luckily, the women have held up their end.

Can we just let Mayim Bialik win already? She’s nominated for this role like every year.

‘The Comedians,’ starring Billy Crystal and Josh Gad, may have flopped, but a Mel Brooks appearance is always memorable.

Louis C.K. may be the billed star on “Louie,” but the show wouldn’t be half as funny without brassy Jewish leading lady Pamela Adlon.

We’re claiming Anthony Bourdain. Haters can refer to that episode of “Parts Unknown” in which he donned tefillin at the Kotel.

For the full list of Emmy nominees, head over to Variety.

Correction: This post originally stated that Adrien Brody wasn’t Jewish. In fact, his father is of Jewish descent.