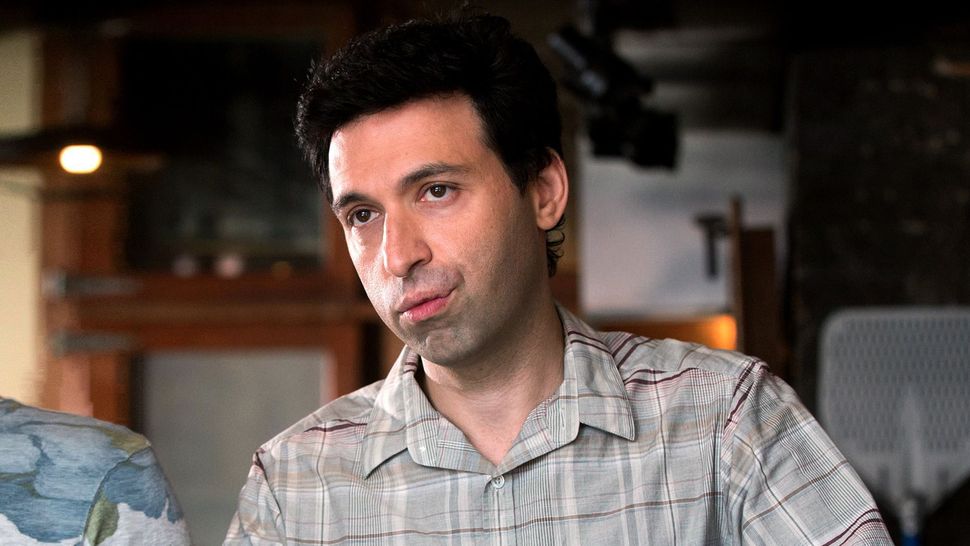 Alex Karpovsky as Ray on HBO’s “Girls.” Image by HBO

Alex Karpovsky wears lovable neurosis well. On “Girls,” he plays Ray, the take-no-prisoners curmudgeon, with a penchant for social commentary and dry wit. In “Folk Hero & Funny Guy,” which premiered at the Tribeca Film Festival this week, he’s a struggling stand-up comedian playing opening act and second fiddle to his famous musician friend.

We chatted with Karpovsky about his own days doing stand-up comedy, his directorial debut on the season finale of “Girls” and that scene between Ray and Hannah.

Forward: I read that you did some stand-up and sketch comedy in graduate school. How much did you pull from those experiences when you were in character?

Alex Karpovsky: I wasn’t very good [at stand-up] and it was a nerve-wracking, kind of terrifying experience. A lot of the guys I was doing it with were pretty dark characters. It wasn’t a particularly happy period in my life and I don’t think about it a lot, because it’s a semi-repressed chapter of my life. But I did think about it when we were doing this movie just because I’m playing a struggling stand-up comic and my body kind of remembers what it’s like…trying to impress a bunch of people with my comedic wit and it wasn’t necessarily working. A lot of muscle memory stuff. Visceral responses started coming back.

This film is loosely based on [writer and director] Jeff Grace’s own experience doing stand-up as an opening act for his musician friend Adam Ezra. How much did you delve into that experience with him?

We talked a lot about Jeff’s past. Jeff found it really challenging to open up for a musician in terms of framing the audience’s expectations and maintaining a certain vibe. We also talked about how the dynamic of a friendship can change, in a way that’s difficult to maintain the friendship after one of the people gets success. It’s hard to just ignore that in the friendship; it’s still going to shape things in subtle power dynamic ways.

Did you find that with your own success and your friendships outside of Hollywood?

Most of my close friends now are friends I had before I was on this TV show. I think I would feel very existentially disoriented if that wasn’t the case. And some of these friendships, maybe we shouldn’t even be friends anymore because we were young when we [became] friends and we changed in a lot of different ways. But I feel like a part of me, it’s really important to keep the friendship going, so I won’t feel completely confused and rudderless out there.

You’ve been likened to Woody Allen and Larry David quite a bit. What do you make of those comparisons?

Those guys are so smart and hilarious that I feel a little bit silly drawing comparisons, but all I can say is that we all are neurotic, East Coast, naval-gazing Jewish people that seem to mine comedy from their own tragic past, from being ostracized and from being in some way forgotten or diminished.

Tonight we’re going to see you make your directorial debut on the season finale of “Girls.” What was that experience like?

It was really interesting to see this world from a completely different perspective. All the meetings that take place, all the discussion that is put forth in regards to the tone, the shaping of character arches. All these things you just don’t really thing about as an actor. I direct my own movies but when I act in other people’s movies I don’t carry my director’s hat with me. When I’m on the “Girls” set I never think about directing. So, it was really revelatory and illuminating and fun. Really fun.

Lena Dunham has been directing you for a long time, ever since [2010’s] “Tiny Furniture.” How have you seen her grow and change as a director?

I love Lena so much, so the way that I view her is sort of through love goggles. I’ve seen her change and not change. I’ve seen her change in the ways you might expect. She’s becoming more savvy in the way she tells stories visually. I think she’s becoming more nuanced in how she articulates directions to actors to get performances that are more genuine, evocative and funny. I’ve seen her become that much more honest, that much more funny, that much more of a seasoned story teller. But in some ways she hasn’t changed. And I say that in the best possible sense. I think a lot of people who get handed the keys to an HBO show in their twenties would adjust in a very unfavorable way. Their heads would explode. That never happened to her. She remained as self-deprecating and goofy and carefree as she always was.

Last week’s episode of “Girls” made for quite a startling twist for Hannah and Ray’s relationship [Hannah performs a sexual act on Ray in a car]. What was your reaction when you first read the script?

It was very shocking when I first read it because it seemed like it came out nowhere. But then when I spent more time with the episode and really spent more time thinking about the season, specifically her arch over the course of the season, and how she’s trying to reclaim an adventurous, wild side of her, by losing the school job, losing the “square” boyfriend and losing the trapping of societal expectations. She’s trying to be free and wild and herself again, all the things that she feels will make her happier maybe, less constrained and maybe even a better writer. I think that sexual encounter with Ray is sort of a strange, perhaps misguided, perhaps not, expression of this reclamation process.