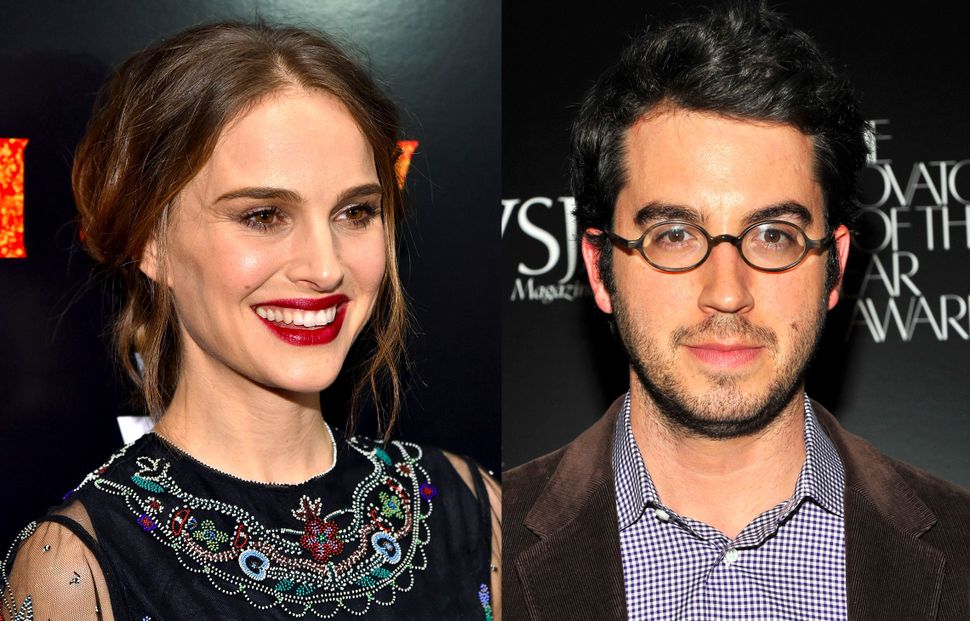 Actress Natalie Portman and author Jonathan Safran Foer go way back (they have been friends for 15 years to be precise) and so do their emails. The New York Times recently published parts of their recent electronic correspondence, after a technological glitch caused earlier messages to be deleted.

The emails are even more intriguing considering tabloid rumors that Safran Foer’s marriage to author Nicole Krauss ended in divorce after he fell for Portman. Portman reportedly did not return his feelings and is still married to “Black Swan” choreographer Benjamin Millepied, with whom she has a five-year-old son.

In the emails, Portman and Safran Foer, both of whom are Jewish, discuss a variety of topics, including Judaism and Israel and their daily lives. Here are the best parts:

Natalie Portman on being Israeli:

Often I wish I was from somewhere inoffensive to anyone, neutral, unproblematic. Like, “Hi, I’m Finnish.” But I know that Israel — the place and its stories — engages me like nothing else. It has made me understand that so many conflicting things can be true at the same time, like how you write in “Here I Am” — another first; your first novel in a decade — “To be and not to be.” Because I’ve primarily lived outside of Israel — hearing, reading and thinking about it from afar — it is also the place I’ve most imagined in my life.

Natalie Portman on the Jewish longing for Israel:

When I first encountered Buddhist thought in my 20s, I was so confused. I’m supposed to be content with what’s going on here and now? I realized how much Judaism for me was connected to yearning — to wanting what you don’t have — which is maybe why Israel is so complicated emotionally for Jews: It’s built into the emotional structure of our religion to yearn for a homeland we don’t have.

So then if we have it, what do we yearn for? We say “next year in Jerusalem” as if we are still in exile. But maybe Jerusalem as an idea is never attainable — so we can keep longing for it even when we have it, like a spouse you desire eternally. You keep feeling that you can’t get them, as if it were the perpetual beginning of a flirtation. Jerusalem does have an aura. The air feels thicker there. It feels like the city, itself, is manipulating, pushing passions around.

Time goes exponentially fast as a parent. I hate saying it, cause ugh, we hated it so much when people said it to us: Pay attention and hold them close because before you know it, they’re moving out of the house. They always said it, and now we say it, and it’s awful, and we’re old. But it’s also true. And that’s why Shabbat is such a lovely idea that I’m trying to revive in my life. I love that Erich Fromm thing about Shabbat being the ability to suspend time. The reason we aren’t allowed to move a book from one place to another on Shabbat, or turn on a light, or buy something — it’s not because it’s “work,” and work isn’t allowed on the Sabbath. It’s because those things would show the passage of time. And Shabbat is the one day when we can stop time.

Not even Shabbat can stop the clock — two have moved from the future to the past in the course of our having this exchange — but every now and then the broken-down time machine that is Hotmail can cough itself back to life. I didn’t bother mentioning it, because it felt so fruitless, but while corresponding with you, I have also been corresponding with what I think is a robot at Hotmail. And while most everything that was lost will remain lost, I was able to dig up a few things, including the email that began our long friendship, from all the way back in 2002.

It’s almost 6:00 in the morning. The boys are still asleep. I can hear the guinea pigs stirring, but that might be the residue of a nightmare. People often refer to aloneness and writer’s block as the two great challenges of being a novelist. In fact, the hardest part is having to care for guinea pigs.

Natalie Portman on the etymology of “guinea pig”:

My mother-in-law used the word guinea pig when telling me a story in French yesterday, and it’s “cochon d’inde,” which translates to “pig from India.” Who’s right?

In many ways, adapting Oz’s memoir was an obvious choice for my first film. The story of Oz’s family at the dawn of the state of Israel is remarkably close to all the stories I heard growing up about my father’s family: the worship of everything European, refugees confronted by the desert, the atmosphere of constant violence, the political debates, the obsession with books and storytelling and language, womanhood in a religious/military/socialist amalgam, the dark fantasy of building a utopian community when all the parents have been killed, the mythology of the pioneer and the new Israeli man. The themes are endlessly interesting to me, as is the question of how much of the mythology is an accurate reflection of history, and how much is storytelling cemented by repetition.

I didn’t realize it was also a radical choice until I started sharing the film. Then I learned that if you set something in Israel, even if it is fundamentally a story of love between a boy and his mother, it is “brave.”

It’s Thursday, garbage day. One of the garbage days, I should say. Thursday and Sunday are garbage days. Tuesday is garbage and recycling day. Monday and Tuesday are alternate-side parking days, which makes Tuesday — parking, garbage and recycling — a very special day, indeed. At 8:30 everyone double-parks, creating two lanes of parking on one side of the street. Once the street-cleaning Zamboni comes through, everyone moves his car back, but you have to stay in it until 10:00 — with the pretext of being able to move it if necessary, otherwise De Blasio’s willing executioner will slap you with a hefty ticket. I don’t know to what extent this is law, convention or a massive NPR conspiracy — literally half of my neighborhood sits around listening to the radio while watching the clock never tick.

My first connection to Oz’s book was the etymology. For me, more than the religion or the country or the food, the Hebrew language is the center of my engagement with the culture. Finding the etymological links between words feels like unlocking poetry from thousands of years ago — aligning with souls of humans across time. The way Oz traces these linguistic genealogies stops my breath: earth (adama), man (adam), blood (dam), red (adom), silence (doomia). Etymology might seem dry, but the connections between words feel to me like the connectedness I felt while giving birth — that I was related to every woman who had ever given birth throughout time. I guess it’s having an experience that gives you a feeling of wonder, to use your word, that you can then feel that you share with people — not just people around you, or people exposed to the things that you’re exposed to, but people in the desert looking at slightly younger versions of the same stars while herding sheep and believing that lightning was the wrath of G-d.

Hello from Blue Ridge Summit. All the cousins slept in the same room last night, which required half a dozen new amendments to the Constitution: who was allowed to wake up whom, and who was obligated to wake up whom, and under what conditions, and exactly how, and exactly when. Cy came into my room not long ago, grumpier than Ed Asner in “Up,” bemoaning how everyone else was awake, and for all he knew, they’d been watching cartoons and eating dessert for hours, and now his entire weekend, not to mention his entire life, had been wasted with sleep. (It was 6:10 in the morning.) I tried to waste a bit more of my life with sleep while he whined, but he refused to be ignored. And when I attempted to gently point out the irony that he’d been complaining about wasted time for half an hour, he only redirected his anger from his cousins onto me.