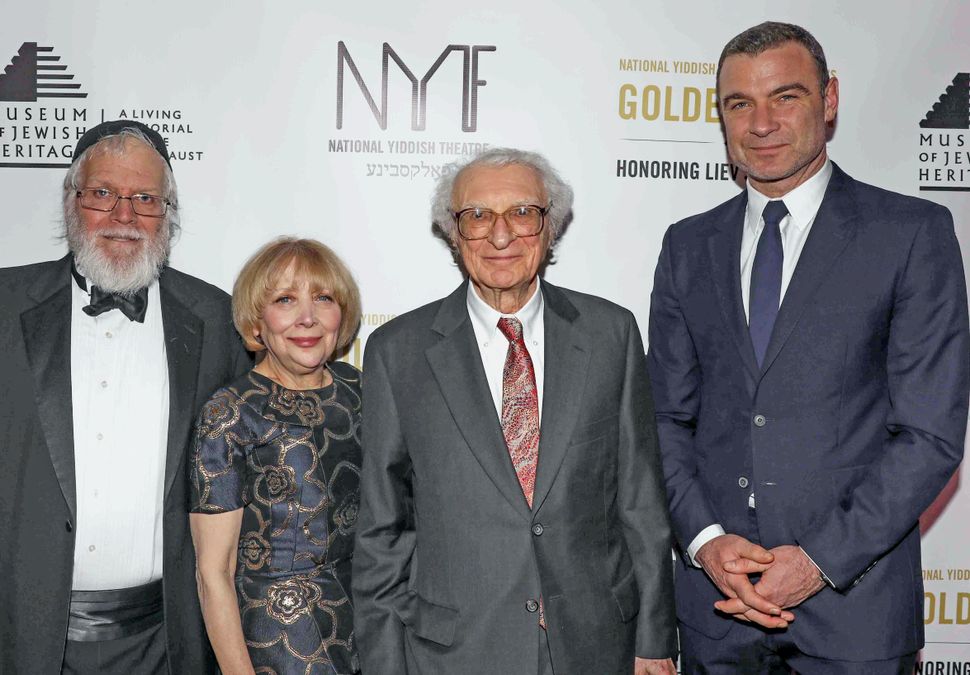 “We have survived the past years just as the Jewish people have survived for thousands of years…and now we are the keepers of the torch, infusing the Jewish community with the Yiddish soul that was at the heart of its creation…. Today we continue the tradition” said Wasserman who led the Folksbiene for five seasons and has earned—among her kudos— the top award for last season’s spectacular hit revival and Drama Desk-nominated musical, “The Golden Bride” [which-I saw four times (!) and to which I took three daughters, four grandchildren a son-in-law—all of whom “blown away” by the production].

“As I walked into the dark, silent theatre in the museum late last night,” said Bryna “I tried to think of how I would thank the artists, the board, the supporters, the staff of my family…. I turned to what Jacob Adler had written in 1926—almost one hundred years ago— ‘I have my memories of the Yiddish theatre, memories I must set down. For the story cannot be told in records and documents. Only lit with the tears of living witnesses, can the world understand how with our blood, with our nerves, with the tears of our sleepless nights, we built the theatre that stands today as a testament to our people…. It belongs to a future generation, part of their life, their culture, their history.”

Golden Globe nominee and Tony winner Schreiber thanked Folksbiene for perpetuating Yiddish culture by encouraging young people to participate in a living inclusive enterprise. “Yiddish” he said, “is that perfect manifestation of who we are as Jews…. No matter your religion, your affiliation, your age or your orientation, Yiddish is here to be enjoyed and celebrated.”

Christopher Massimine NYTF’s executive producer, announced that there are plans to launch a National Tour of “The Golden Bride” in 2018, the first NYTF production to warrant this kind of national exposure.

In this my final Forward column [after nearly 40 glorious years of covering the Who’s Who and the What’s What of the Jewish cultural, communal, diplomatic, Holocaust-related world] —I want to not only tout Zalmen Mlotek— NYTF’s Music Director—Conductor— Artistic Director, but to remember his parents —Chana and Yosl Mlotek—without whose nurturing, input, inspiration, talent and commitment to Yiddishkeit—NYTF past, current nor future productions could have been realized.

Zalmen’s father—Yosl Mlotek [Yiddish educator and Forverts??]—had—as a teenager in pre-war Warsaw been my “baby sitter” enabling my parents to attend events. At the same time Yosl published a children’s magazine called “Kinder Frayndt” (Children’s Friend) and during the summer was a DJ on a radio program broadcast to the children at the Medem Sanatorium—a refuge for inner city children to which I was sent [1938/1939].

Yosl Mlotek and my father (Matvey Bernsztejn) both worked at the YIVO in Vilno [1940/41] and post war both worked for the Forverts. Yosl, my mother and I were on the same 12-day Trans-Siberian train journey to Vladivostok as well as passengers aboard the “Asakura Maru” that took us to the Japan’s port Tsuruga. Yosl, my mother and I and several other “khaverim” lived in the same house in Kobe, Japan and in the evenings—Yosl would lead us refugees in singing Yiddish folksongs. He and the late Amik [Abe] Brumberg [same train, same ship] organized a surprise 10th birthday party for me attended by—among others —Sheva Zucker’s [publisher of “Oyfn Shvel”) then dashing young father Meyer Zucker.”

Zalmen’s mother, Chana Gordon—YIVO founder Max Weinreich’s secretary —had been my “boss” during my after-school job in 1946/47/48 at the YIVO’s then 123rd Street base. I still remember the day Chana returned all aglow from a conference in Los Angeles where she met Yosl. Their partnership in rescuing and publishing Yiddish songs, poetry and folklore is a monumental gift to the Yiddish world.

Apropos Zalmen’s dedication to and nurturing of the Folksbiene—there’s the Yiddish saying: “Dos epele falt nisht vayt fun beymele” (the apple does not fall far from the tree).