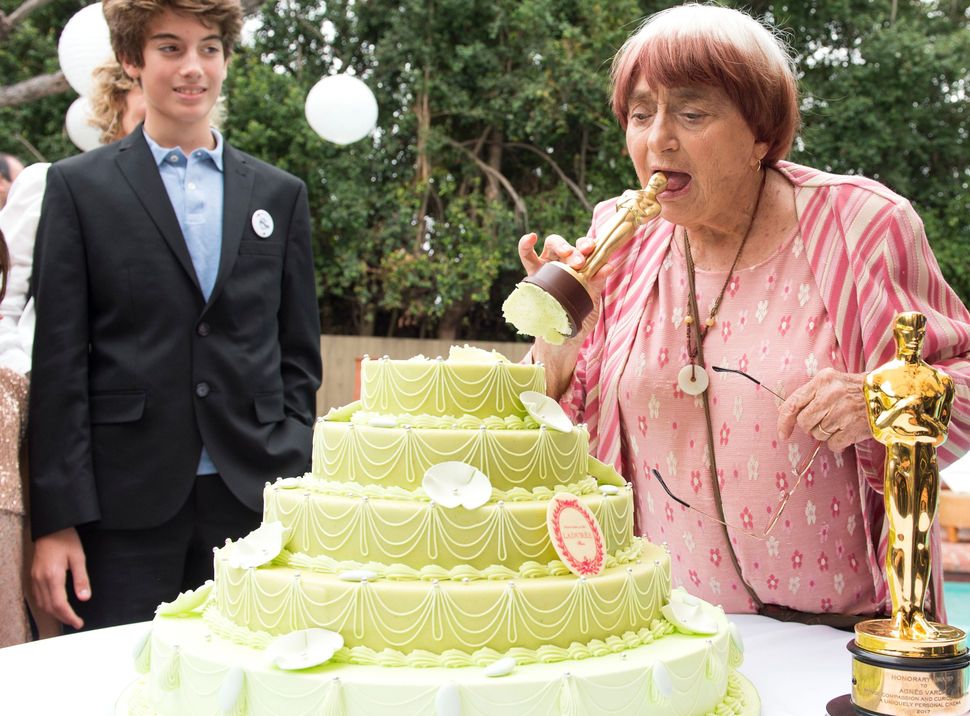 This week brought the 2018 Oscar nominations, the single best outcome of which is that now everyone has good reason to use the brilliant photo, above, of nominee Agnes Varda eating an Oscar statuette. It’s applicable in every situation. Angry at the establishment? Consider munching on an Oscar. Trying to figure out who you want to be when you grow up? Ruminate, like the young man on the left, on the glory of Agnes Varda going straight for the statue’s head. Fancy a cake? Why not top it with an Oscar? Fancy an Oscar? Why not put it on a cake?

If you can tear your eyes away, read on for this week’s movie news.

Only a slight hitch in today’s Agnes Varda adoration: She isn’t Jewish. Many Oscar nominees are, though, and Jenny Singer found all of them.

The Netflix documentary “One of Us,” which followed three Hasidic Jews who chose to go off the derekh, attracted a lot of attention and even more controversy. Shortlisted for the Academy Award for Best Documentary, it ultimately wasn’t nominated for the prize. Before the nominations were announced, Benjamin Feldman meditated on the film’s merits and flaws for the Forward. “Though an admirable research achievement, akin in some ways to Truman Capote’s ‘In Cold Blood,’ the film is unbalanced,” he writes, “telling the story only through the eyes of three survivors, with no depiction of the admittedly difficult to obtain confidence of Hasidic authorities, whose opinions about OTD groups and Footsteps are widely disseminated through the contemporary Yiddish religious press.”

We can’t wait to see the new documentary “RBG,” which recently had its world premiere at Sundance; to our collective impatience, it will likely be a while before the film is released in theaters. In advance of Forward editor-in-chief Jane Eisner’s conversation with Ginsburg next week — find details here — we reviewed some of the pioneering justice’s prior documentary appearances.

Hurrah! The films in question: Manfred Kirchheimer’s “My Coffee With Jewish Friends” and Amos Gitai’s “West of the River Jordan.” Daniel Witkin wrote about the two, both currently screening in New York, for the Forward. “Between them, ‘My Coffee With Jewish Friends’ and ‘West of the River Jordan’ show some of the many ways that modern Jews are responding to the biggest issues in their community: religion, politics, culture, all orbiting the eternal question of identity,” he writes.

5) A Jewish Hollywood stalwart passed away

Connie Sawyer, born as Rosie Cohen, passed away on January 22 at the age of 105. Hollywood’s rumored oldest working actress, Sawyer found, as Benjamin Ivry writes, “fairly constant employment in little vignettes such as the ‘Talkative Woman at Hanging’ in the 1969 John Wayne vehicle ‘True Grit.’”