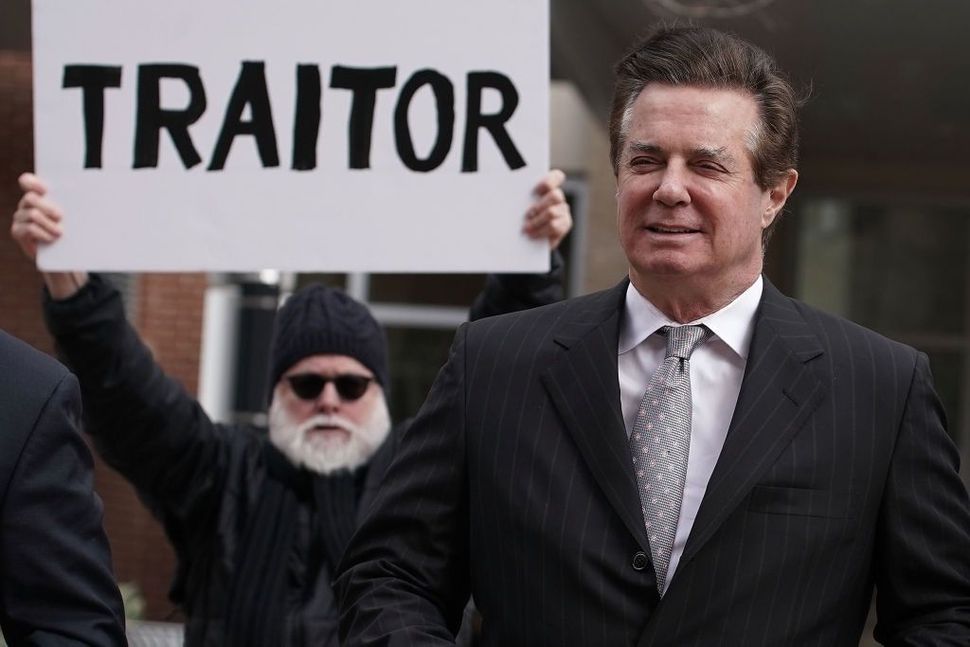 Will Manafort keep his $15,000 ostrich coat? Image by Getty Images

The American public anxiously awaits the verdict of Paul Manafort’s hot-button trial, but we at The Forward  have heavier matters on our minds. Don’t get us wrong, we are feverishly refreshing our Twitter feeds to check if the jury has come to a decision, yet we can’t help but fixate on a certain aspect of this judicial rigmarole. What happens to Manafort’s ostrich coat if he is sent to jail?

Yes, we are referring to the $15,000 leather coat plucked from an ostrich’s body that Paul Manafort owns, which prosecutors revealed in court to underscore the defendant’s flashy lifestyle. This coat, which has become a universal emblem of absurdity and excessive spending, was purchased in Alan Couture. Maximilian Katzman, the ex-manager of Alan Couture and son of the high-end shop’s founder, Alan Katzman, testified against his former customer during the trial, saying that Manafort spent almost $1 million in their store, with this luxury item included in his shopping sprees.

We have clung to this coat because of the sheer inanity: Manafort paying an exorbitant sum for an objectively hideous coat that some poor ostrich was slaughtered for. It reminds us that there is still room for laughter and collective bonding across the Internet in a time of extreme political partisanship – both Republicans and Democrats alike have poked fun at the absurdity of this coat.

And so, we wonder, what happens to this precious coat if Mr. Manafort is locked up?

Does he get to keep it? Will the government confiscate it? We would personally love to see Robert Mueller strut around in the ostrich coat.

The Daily Beast spoke to Renato Mariotti about this piquing legal complication. Mariotti explained that the the government has a few different routes to pursue upon depriving a person of his or her property. “Because it’s the easiest for the government, they do criminal forfeiture,” Mariotti told The Daily Beast. Criminal forfeiture occurs when the government takes away a possession from a person that was used during a crime. However, it is questionable if the government will be able to seize the coat from Manafort if he is found guilty because it is was not listed in the unreported payment. The Daily Beast explains that, “bank records Alan Couture entered into evidence show a $102,000 wire transfer from Pompolo Ltd — one of 31 offshore companies Manafort created — shortly thereafter. But that transfer isn’t included on a list of unreported-income transactions alleged by the government, meaning the feds might not be able to lay claim to it even if there’s a guilty verdict.”

Before you start conjuring up images in your head of Paul Manafort wrapped in that tasteless ostrich skin while harrumphing in a jail cell, take a step back. Even if the jury decides to ship him off to prison, he might have to reimburse his victims or pay a fine. The compensation he’ll have to offer will be quite a hefty sum — and he may have no choice but to part with the deeply beloved ostrich coat in a desperate attempt to make bank.