A Formal Critique Of The ‘Nice Jewish Guys’ Pin-Up Calendar 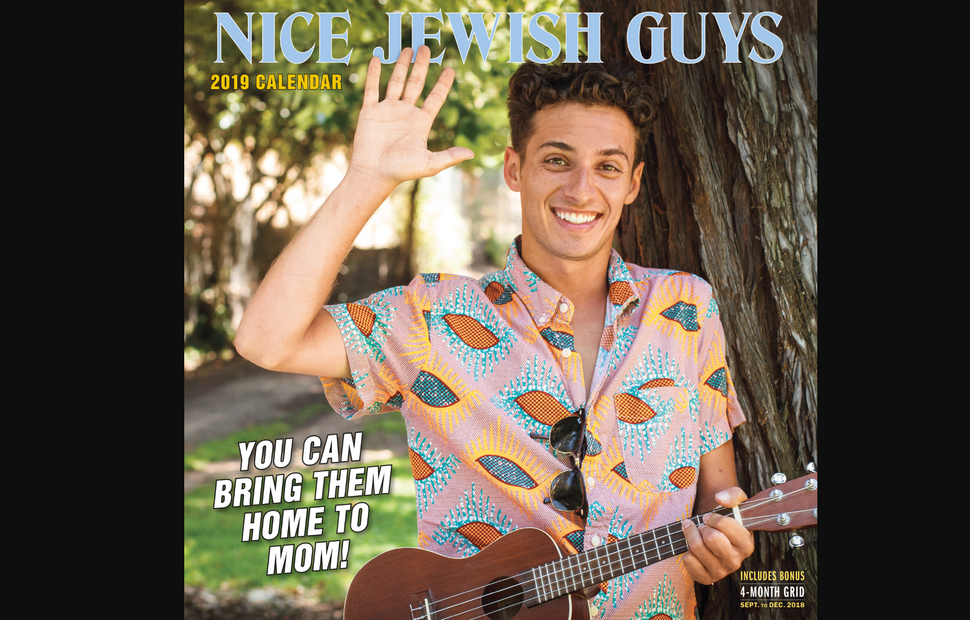 The front cover of the calendar Image by forward

Viewed at the Forward, at my desk, October 2018

The 2019 edition of the “Nice Jewish Guys” wall calendar, (2018) by Adam Cohen for Workman Publishing on glossy paper, uses a typical “pin-up calendar” model to showcase 12 real-life Jewish American men in various poses, with accompanying blurbs. “This music producer and touring drummer has studied Krav Maga for years. Booyah!” reads the entry for November’s pin-up, Mark, for example. The calendar was published in New York City and printed in South Korea.

In this paper, I will analyze the 2019 “Nice Jewish Guys” wall calendar in the context of the contemporary Jewish American narrative, the historical and mythical Jewish story, and my own sexual proclivities, on behalf of young Jews everywhere.

All 12 models featured in the 2019 “Nice Jewish Guys Calendar” are young, white professionals. Each is pictured smirking at the camera as thick tufts of hair hover above their wide foreheads. Maybe a more efficient description is: Every person in the calendar looks like the guy at hebrew school or summer camp who screams “I SWEAR I SAW HER BRA” the loudest while singing the birkat hamazon, * grace after meals.

It’s nothing against these specific guys — as individuals they are nice looking fellows whom I would be reasonably willing to leave alone with a baby or small dog for 15 minutes. In their button-down shirts and gelled hair, they seem to cater to our every cherished ideal of what a “nice Jewish boy” should be. Yet upon closer look, only one is wearing glasses, and none report experiencing superlative academic success. Indeed, grouped together, these men represent a strange and uniquely contemporary Jewish desire to celebrate homogeneity and mediocrity. Jewish people have lived in every corner of the globe and adapted to every cultural climate, yet the greatest stab at diversity this calendar makes is that some of the men play acoustic guitar, while others prefer electric. They are whiter than the innards of a coconut. And they are boring.

Listen, it’s not the guys’ fault, or the fault of Workman Publishing. The calendar is just an attempt to capitalize on the cultural notion of the “nice Jewish boy,” a longtime archetype of Jewish masculinity. But the appearance of this calendar in the Forward’s mailbox gives us an opportunity to examine the idea that the “nice Jewish boy” may be more damaging for both men and women than positive. Hasn’t 2018 taught us, if nothing else, that maintaining a “nice guy” exterior does not preclude a person from being a sexual predator? In fact, that the cultivation of an appearance of “niceness” rather than actual, demonstrable decent treatment of other people, is sometimes indicative of a predatory character?

Being nice is so important. Aggressively advertising your niceness in an attempt to score is suspicious.

Gazing at this celebration of milquetoast masculinity, we have to wonder — whom is this for? Jake is holding a cat. Dave is a “self-professed ‘mamma’s boy.’” Morgan is “sensitive,” Frank loves matzo ball soup, and David has taken massage lessons and will cook you breakfast in bed.

It’s not clear if these molds of male moderation are an attempt to abrogate the violence culturally implied in masculinity, or to lure partners under false pretenses. Either way, do we really need to socialize our sons to be cat-loving soup eaters with thinly veiled pretensions to female pleasure?

Now, forget about the fact that this list basically treats women like minorities and minorities like fictional creatures — Jews are so much more than hairy, bagel-eating mouth-breathers from the coasts. Throw that rehabilitated Nazi garbage out the window and remember that Jews are the people of musical theater, of literature, and of laser-invention! We have serious digestive problems and we made glasses hot and we started our own country. Our big thing isn’t our noses, it’s dominating disproportionately in industries like business, fashion, and entertainment. We experienced a massive modern genocide, came back with a vengeance, and then we wrote jokes about it. We’re sometimes Stephen Miller, and sometimes Bernie Sanders. Our history is a seemingly contradictory dance of tradition and adaptation. We like babies and comedy, and we don’t like genocide. And we can do better than an Ashkenazi-only calendar without a single Debbie Friedman reference.

“Hot mensch alert!” the back cover of the calendar reads. “You can bring them home to mom!” the front exclaims.

First of all, we’ll be the ones to decide who the mensches are — you can start by showing us their voting records.

Second, it’s the 21st century. My dad is just as interested in my romantic life and chances of producing grandchildren as my mom. Get with it.

Bottom line: the most thrilling thing about this calendar is the chance to objectify men, followed shortly by the chance to know what date it is.

But at some point, Jews are going to have to take a good hard look at our self-made image and ask: Did you or did you not survive millennia of torture only to found your own state, win over 900 Nobel prizes, and invent lasers? Enough with the witless stereotypes. Jews — who do you want to be?

*For the uninitiated, shouting English words that rhyme with Hebrew phrases contained in the Birkat Hamazon is a common practice among children and teenagers in progressive Jewish spaces. For example, “uv’rachamim” = sour cream, and “asher bara” = I swear I saw her bra.

A Formal Critique Of The ‘Nice Jewish Guys’ Pin-Up Calendar