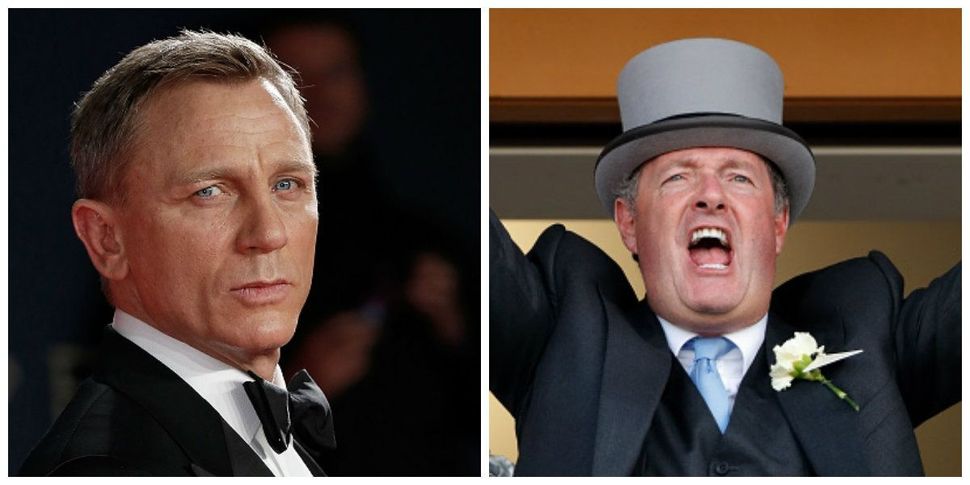 British TV personality Piers Morgan mocked actor Daniel Craig for carrying his infant child in a baby carrier against his chest on Monday on Twitter.

And we know, we know, you don’t come to the Forward’s pop culture page for this dreck! You come for serious pieces about jobs held by Jews in the Pale of Settlement at the turn of the century, but we can’t resist a story that presents an opportunity to talk about everything we love: bad men, good men, babies, the word “papoose,” and excellent tweets. Craig recently had a baby with Torah-matriarch-incarnate Rachel Weisz, and was photographed holding their tiny offspring in Manhattan’s East Village.

Morgan took umbrage to this image, one imagines, because he is a deeply self-loathing person whose thirst for attention would rival that of a first child at her new sibling’s bris.

Now, before we get into Morgan’s cry for attention at any cost, let’s enjoy this picture: Craig looks shell-shocked, covered in scruff, and like he’s wearing many, many layers of athletic gear. He and his baby are both wearing hats, though sadly only Craig is squinting through a sexy pair of glasses, as if the photographer is a warm bed in a quiet room. It’s nice to see men suffering through parenting sometimes! As the Sun noted — “The tired action star looks like a Spectre of his former self.” (Game recognizes game, pop-culture friends.)

The denizens of midday Twitter were quick to rush to the defense of a) Daniel Craig b) fatherhood and c) enemies of Piers Morgan. Here are some of their best gems:

I agree with Piers Morgan. What kind of father carries his own baby? When handed his baby a real man will SWAT IT TO THE GROUND and then do 50 push-ups THE NON GIRLY KIND to show that baby what a REAL DAD IS

Making the most of an opportunity:

So wait, I get to post a cute picture of my son, fight toxic masculinity, AND drag Piers Morgan at the same time? Did I… did I win the lottery pic.twitter.com/tb0je0JGrf

That’s right Piers Morgan didn’t raise no wuss kids…you crawl or you get left behind pic.twitter.com/WKp1otU9OC