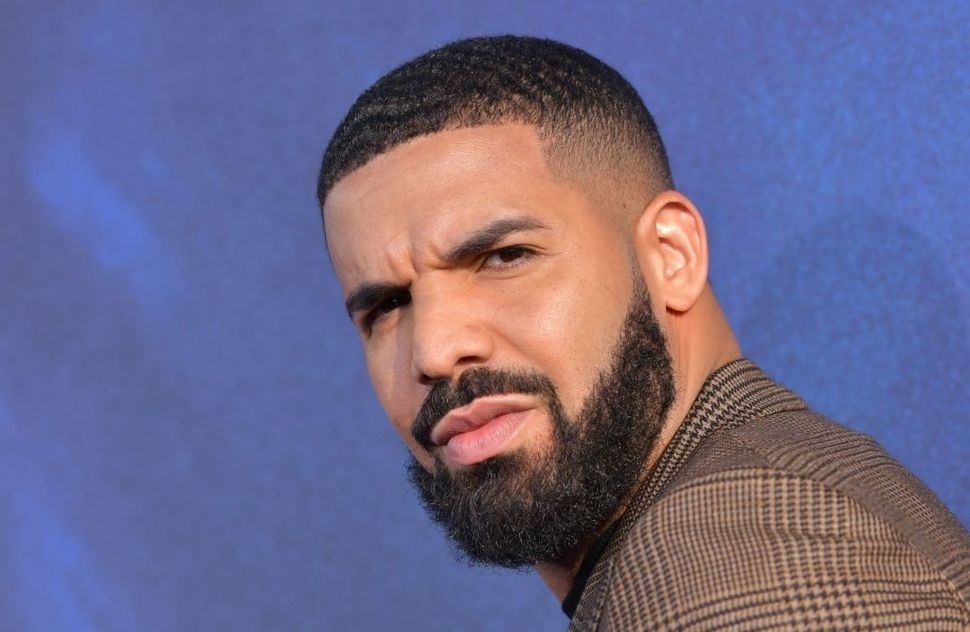 Wait — what? Drake is more successful, by some measures, than The Beatles Image by Getty Images

“In the next life, I’m tryna stay paid,” the rapper Drake announces on a recent single. “When I die, put my money in the grave.”

That request may be fulfilled sooner rather than later, now that the rapper has mortally offended every living Beatles fan.

The 32-year-old rapper is partial to tattoos and self-aggrandizement, and the two were combined in garish grandeur via a new image inked on Drake’s arm. It’s a rendering of the famous cover of the Beatles album “Abbey Road,” with Drake standing at the front of the pack, either halting them or waving goodbye.

Drake has a tattoo of himself in front of the Beatles on his arm. “I got more slaps than the Beatles…” pic.twitter.com/krzzFSF2Mj

The black-and-white sketch, first observed by fans this weekend, reflects the rapper’s recent triumph over the boys from Liverpool. (You can see the full tattoo in color here.)

With his most recent single, Drake squeezed past the Beatles’ second-place record for the most simultaneous top-10 songs on the Hot 100 chart — though Madonna holds the actual crown. The Jewish hit-maker has clearly been planning for this moment: On a Meek Mill track last year, he prophesied, “I got more slaps than the Beatles.”

Notwithstanding tattooing yourself just to announce that you are in second place, it’s hard to see what Drake has done that the Beatles did not. The Beatles’ music created a cultural frenzy, shaping social movements; they are the best-selling band in history, and maintain the more enviable record of for most number-one hits on the Hot 100. Meanwhile, Drake has…some decent head-bobbing songs about girls named Kiki? (Though he has done significantly more for the Jewish moms of the world.)

Our beef with Drake — our former favorite bar mitzvah boy — goes more than skin deep. In July, Drake buried the hatchet with longtime nemesis Chris Brown, collaborating on Brown’s single “No Guidance.” Brown’s musical prowess is only outshone by his reputation for beating women — he has admitted that in 2009 he battered then-girlfriend Rihanna until she was bleeding and bruised, and has been accused of domestic violence by other women on several other occasions. Multiple women have said that Brown threatened to kill them. Money in their graves would probably not be much of a consolation.

Then again, while Drake collaborated with a known abuser, John Lennon abused women himself.

“I was a hitter,” Lennon told Playboy Magazine in 1980, explaining that he regretted his violence. “I used to be cruel to my woman, and physically… any woman,” he said, confirming that the lyrics to the song “Getting Better” were autobiographical. “I hit women,” he added, just in case there was any confusion. Lennon biographers have also gathered accounts of Lennon’s abuse towards women in his early years.

Musically — and in terms of influence — Drake and the Beatles have little in common. But in their personal lives, the rapper and John Lennon shared something totally apart from chart success — willingness to forgive others and themselves for terrorizing women.

“I got hoes that I keepin’ in the dark,” Drake brags on “Money In The Grave.” Flip the lights on, and you can see the tattoo for what it really is.