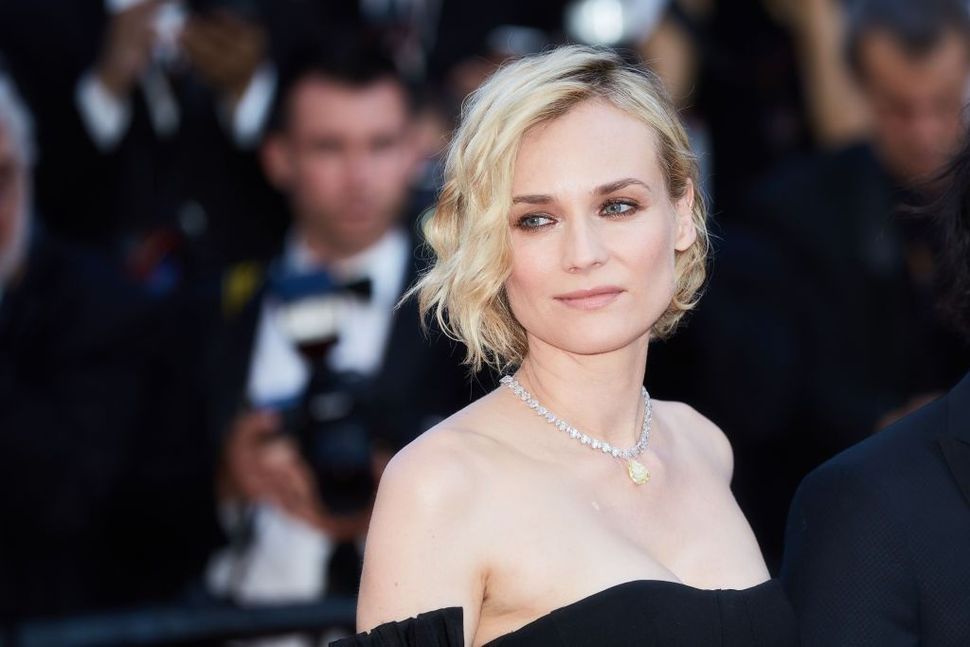 The model and actress Diane Kruger, of “Inglorious Bastards” fame, is currently starring in “The Operative,” a movie about a Mossad agent. To practice her spying technique, she told The Hollywood Reporter, former Mossad agents helped her try out passport fraud in the Tel Aviv airport.

“The Operative,” based on the Israeli novel “The English Teacher” by Yiftach Reicher Atir, follows a non-Jewish woman who is recruited by the Mossad to spy in Tehran and ends up falling in love, then vanishing. It has earned a score of 40% on Rotten Tomatoes.

For the movie, which a reviewer for The Guardian called “at all times extremely boring,” the 43-year-old Kruger flew to Israel to train with former spies from Israel’s intelligence agency. As part of that training, she said, producers “had agents that gave me false identities, and I had to try to get into Tel Aviv International Airport on a false passport.”

Kruger described “trying to infiltrate Tel Aviv” as “a bit more intense” than acting on camera.

Kruger is a German-American with no known ties to Israel, so one can’t necessarily fault her for agreeing to play spy at an international airport as part of her job.

But there is an intense strangeness to a European American woman using Israel’s major airport as a playground and coming out apparently unscathed, when people of color, especially those of Arab descent, consistently report experiencing harassment and detainment at that same airport. And while Kruger used the heavily-secured venue as an acting studio, Israeli and Palestinian Arabs visit Ben Gurion because it’s often their only option for entering or leaving the country.

Israeli security agencies openly racially profile, especially at the airport. “Ben Gurion, you can go to hell. Thirty years of humiliation and it’s still not over,” wrote Reda Mansour, Israel’s ambassador to Panama, earlier this month, after he and his family were pulled out of line and searched when Mansour told a guard that his family was from an Israeli Druze village. “I will never ever ever ever ever go to Israel again,” wrote the black American rapper Azealia Banks in May 2018, stating that while she had no desire to boycott the country politically, the treatment she endured — particularly at the airport, where she watched white Americans stream, unquestioned, ahead of her — was unlivable.

For the Forward, Yousef Munayyer has written about a lifetime of experience waiting through long questioning at Ben Gurion airport, and sometimes missing flights, with his family. In 2013, the Netherlands Institute for Human Rights found that El Al employees in the Netherlands labeled the passports of non-white travelers differently and questioned them extensively, while white travelers were allowed to pass through. (El Al said that their policies were passed down by Israel’s Shin Bet police department.) And the U.S. State Department criticized the “unequal treatment that some Arab Americans receive at Israel’s borders and checkpoints” in 2016. (President Trump has several times, while describing Muslims, said that the U.S. should adopt Israel’s “profiling” policy.)

The airport isn’t really an appropriate place for anyone to practice theatrical crimes. It’s not clear what the penalty for faking a passport is in Israel; in the U.S. the punishment is 10-25 years in prison. But the story of Kruger, the team behind “The Operative” and the airport authorities who apparently treated the situation lightly, sits in damning contrast to the way Arabs and other people of color are treated, just for trying to fly somewhere.

Kruger’s story suggests that what is for some a daily indignity, is, for others, just a game.