Fighting What The Nazis Fear 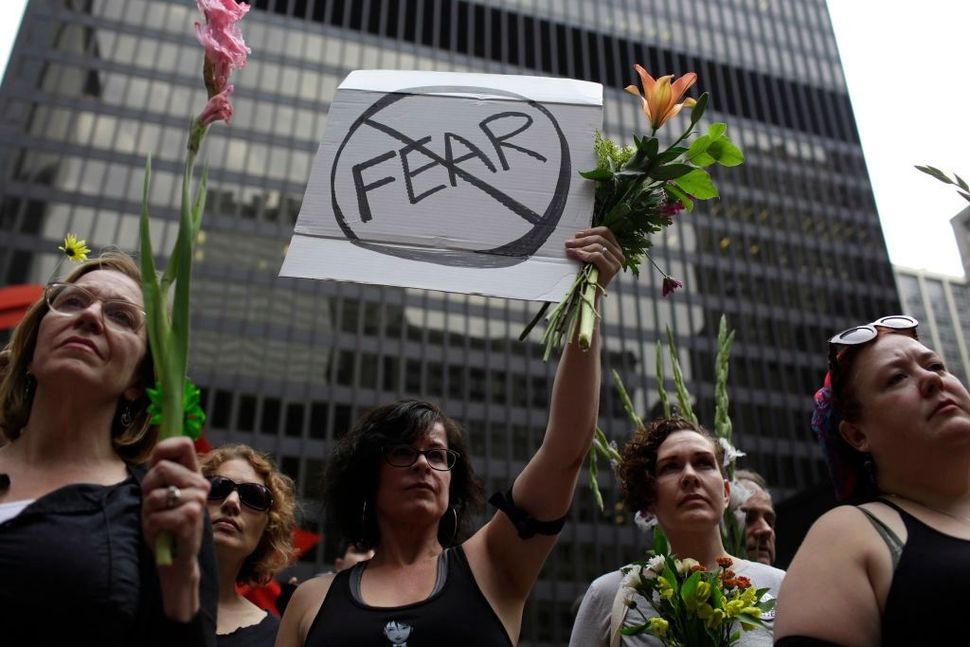 “Prophetic resistance is only possible for those who still dream. You must be able to dream to see justice in the midst of it all.” — Rev. Dr. Traci Blackmon at interfaith rally in Charlottesville, VA August 11, 2017

On one side of us hundreds of white supremacists were shouting “You will not replace us” and on the other side hundreds of anti-fascists were chanting “Nazi scum.” We were about 50 clergy people, of many denominations, bearing witness and being a moral presence for love and justice. We were all crowded into the width of one street. It was frightening.

Despite the obvious difference in their goals, the resemblance between the two groups was striking: largely millennials, angry looking, most wearing helmets, taunting the other side, some carrying shields and carrying signs with swastikas. The greatest visible difference was that white supremacists were 99% white male while the anti-fascists were across all gender lines and mixed race; and of course, the anti-fascist signs had negative words prefacing their swastikas.

I think it is no accident that our nation is so polarized at the time that we have the largest wealth and income gap since the Civil War. Over half of our population has seen no improvement in their real wages in decades while the top 1% has grown fabulously wealthy. People are feeling angry and hopeless hence both the opioid epidemic and the election of Donald Trump. It is clear from studying American history that white populism emerges in these moments and undermines the formation of a multi-racial, multi-ethnic coalition that can bring about economic and social justice.

This overt assertion of white supremacy is occurring at the same time that the challenge to structural racism has become more powerful through the organizing of the Black Lives Matter movement, the resistance at Standing Rock, the struggle for immigrant rights and the growing awareness of white privilege among many whites. This will inevitably cause more confrontations.

White supremacy is not only racist — it is deeply anti-Semitic and homophobic. In Charlottesville, we heard no chants mentioning people of color, but homophobia and anti-Semitism were loudly vocalized. This is a struggle that the Jewish community cannot avoid. Not only are we targeted as Jews, many of us are GLTBQ and, increasingly, we are people of color as well.

I bring to this the perspectives of a rabbi, the son of Holocaust survivors and the grandson of those murdered by Nazis. We are faced with a difficult challenge: we cannot tolerate white supremacy and we must listen to the fear and pain that many of its supporters carry. I heard part of one speech, the speaker was fabricating statistics about a dwindling white population and whipping up fears of the eradication of white people, ending in the chant of “You will not replace us” (at a rally evening before, chants were heard, “Jews will not replace us”).

These are the fears of the rank and file followers. Contrary to the facts of wealth, income or education, they believe they are losing ground relative to non-white groups. The truth is that they are not getting what they were led to believe and their economic future is not promising. The ideological white supremacists and nationalists are feeding on this. Donald Trump knows that he needs these people to stay in power; he will not condemn them.

It is the work of those white people who are able to hear their pain, attempt to reach over barriers and advocate for policies that will benefit them as well. Dehumanizing and dismissing them leads to more hatred. We will not bring about a more just society through violence. We, also, need to reach out to our allies in the anti-fascist movement and have conversations about their tactics.

The more doable and equally important work is for people who do not think of themselves as activists is to realize that their future well-being is at stake. History shows that a society with extreme wealth inequality will collapse, and it is usually ugly. The extremism of wealth gives rise to all other forms of extremism. We need to understand how white supremacy is at the root of the inequities in our schools and legal system. We must stand up against hate and for love, while we advocate for policies that bring about more justice.

We are the heirs of prophetic tradition that have called people to justice for millennia. We are, also, the more immediate heirs of generations of people who worked for justice throughout their lives. It is time to honor both our spiritual and historical traditions.

Rabbi Mordechai Liebling is director of the Social Justice Organizing Program at the Reconstructionist Rabbinical College and a founding member of T’ruah: The Rabbinic Call for Justice

Fighting What The Nazis Fear