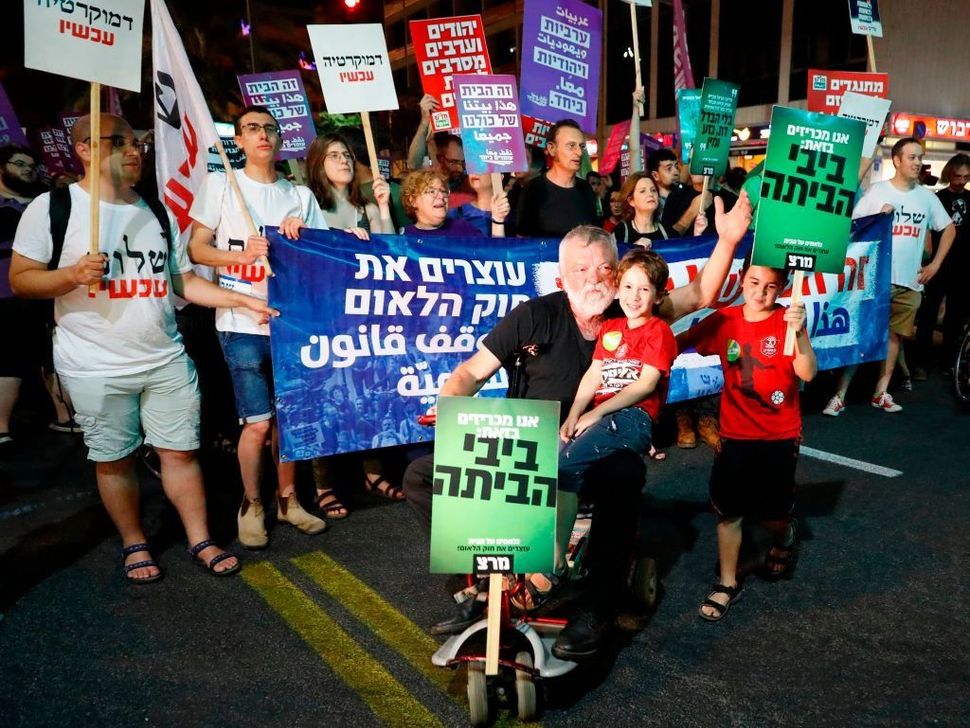 Demonstrators attend a rally to protest against the Nation-State Bill in Tel Aviv, Israel on July 14, 2018. (Photo by JACK GUEZ/AFP/Getty Images) Image by Getty Images

What is the Nation-State Bill?

The Nation-State Bill is a proposed Basic Law that would anchor Israel’s status as the national homeland of the Jewish people. The bill clauses contain, for example, the “Law of Return,” state symbols, Jewish festivals and the Hebrew language. It is Israel’s first attempt to constitutionally anchor its identity in a Basic Law, with the exception of two Basic Laws in which Israel was defined as “Jewish and democratic.”

So far so good — so what’s the problem?

Notwithstanding the declarative nature of the bill, it does not enumerate the principle of equality, nor does it include the democratic character of the state’s identity. The bill completely ignores the Israeli Declaration of Independence, which stipulates that all citizens of the state must have equal rights. Even the words “Jewish and democratic” appear nowhere in the bill.

The Basic Law: Israel, as the Nation-State of the Jewish People, must acknowledge Israel as a Jewish and democratic state. The bill should be a law that we can all be proud of, and therefore must include the principle of equality for everyone. It needs to be rethought and rewritten as a Nation-State Bill that protects the particular and universal aspects of Israel, and one that respects all of Israel’s citizens, including minorities.

If it is so straightforward, why hasn’t the Knesset succeeded in passing this law for almost a decade? After all, the political Right in Israel enjoys a majority in Knesset. Should they choose to, couldn’t they easily pass the law?

The legislation has yet to pass because many people understand the problematic nature of the bill’s current language. Members of the coalition, the legal adviser of the committee that is supposed to promote the bill and even the attorney general and president have all spoken out against the bill precisely for the same reasons that we at the Israel Democracy Institute warned against the current bill up for consideration.

Some politicians say that there are enough Basic Laws about equality and democracy. It is time to care about the state’s Jewish character!

Israel is one of the only countries in the democratic world that has no constitution that anchors its fundamental rights. A study conducted at IDI found that full equal rights for minorities were anchored in every country’s constitution, including countries that are clearly nation-states. In contrast, the proposed bill states that Israel is the national home of the Jewish people without ensuring the principle of equality for all its citizens as defined in the Declaration of Independence. This deficiency may lead to an imbalance between the state’s Jewish and democratic values. Studies show that a large proportion of the Israeli public already believes that this has happened. The 2017 Democracy Index found that 46.5% of Israelis felt that the Jewish aspect in the country was too strong, while only 26.5% felt that the democratic aspect was too strong.

Isn’t the right to equality enshrined in the Basic Law: Human Dignity and Liberty?

The answer is no. It is true that the only constitutional protection for minorities in Israel is Israel’s High Court’s interpretation of the Basic Law: Human Dignity and Liberty. Nevertheless, the law contains no explicit promise of equality. What’s more, many of the bill’s proponents believe that the purpose of the Nation-State Bill is to change this interpretation of the court in various contexts and even to override it.

What is wrong with having separate residential areas and preserving the special character of communities?

The granting of legal protection, and all the more so at the level of a Basic Law, to race-based segregation in residential communities constitutes a severe blow to the principles of equality and human dignity. A United States court ruled in the 1950s that separate cannot be equal. Do we want to be the only democracy on earth to make race-based segregation legal?

How is that different from the admissions committees that exist today in some residential communities?

The Nation-State Bill does not mention admissions committees. The Admissions Committee Law, which allows small residential communities to have admissions committees on the basis of “compatibility with the socio-cultural fabric of the community town,” was passed in 2011. However, the law explicitly states that no person may be discriminated against on the basis of race, ethnicity, religion and so on. The content of the Nation-State Bill, which is far more extreme, will enable residential communities to be established on the basis of nationality.

Are Hebrew and Arabic supposed to have equal status?

Currently, both Hebrew and Arabic are official languages in Israel. The fact that Israel is the Jewish national home could allow higher status to be given to the Hebrew language. In a proposed text for a constitution for the State of Israel, written at IDI, we suggested Hebrew be defined as “the language of the state” and that Arabic be defined as an “official language.” Why would the bill’s authors downgrade Arabic from the status of an official language? What can be gained other than offending the Arab minority?

The bill is also problematic regarding the relationship with diaspora Jewry, right? What’s the problem? And, if they do not live in Israel, why should they interfere?

The bill was recently amended to state that Israel must work only “in the Diaspora” to nurture a relationship with Diaspora Jewry. This means that Israel does not need to do such work within the country itself. This was a capitulation to the ultra-Orthodox parties, who were afraid that the bill would be interpreted as requiring Israel to recognize the non-Orthodox religious streams in Judaism (a significant part of the Jewish population abroad is Reform or Conservative). There is no reason that a Basic Law that defines Israel as the national homeland of the Jewish People should contain a clause that alienates a large portion of Jews worldwide.

The Israel Democracy Institute (IDI) is an independent center of research and action dedicated to strengthening the foundations of Israeli democracy.