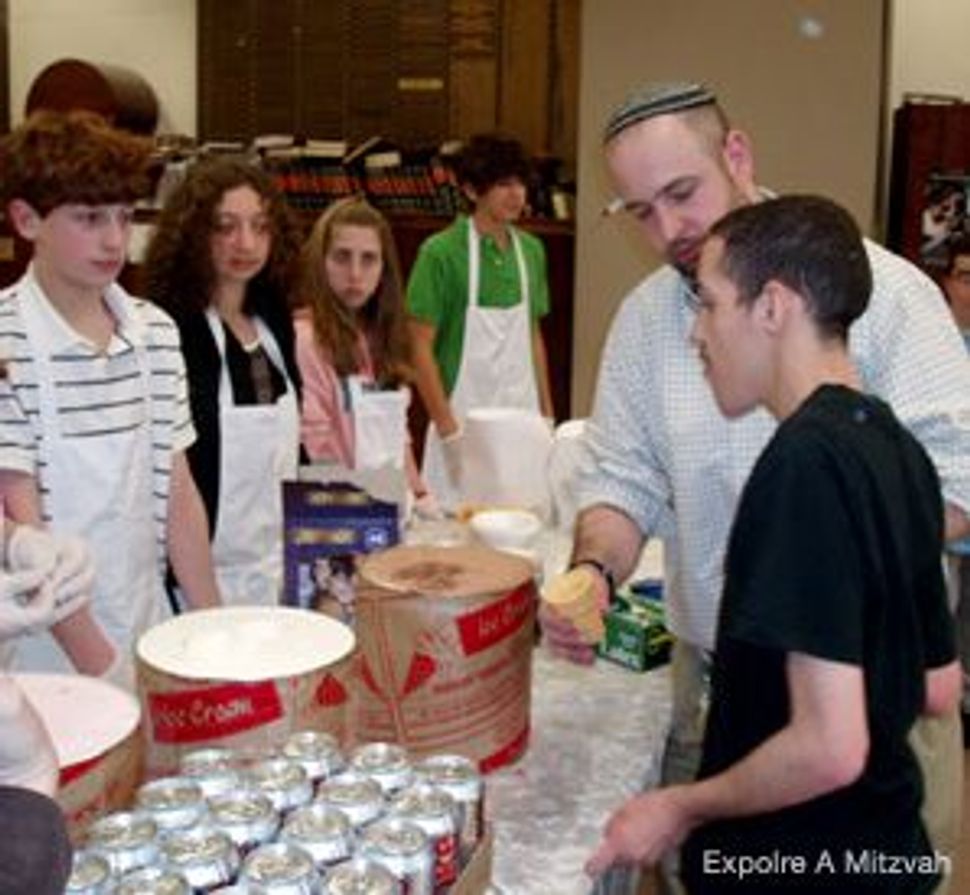 STAYING INVOLVED: Members of Explore a Mitzvah donate their time to serve up ice cream to people with developmental disabilities.

Rebecca Schwartz was featured in the Forward’s Giving section three years ago, around the time of her bat mitzvah. Back then, she was one of the first to participate in Give a Mitzvah — Do a Mitzvah, a program that helps teenagers use their coming-of-age ceremony to help others. 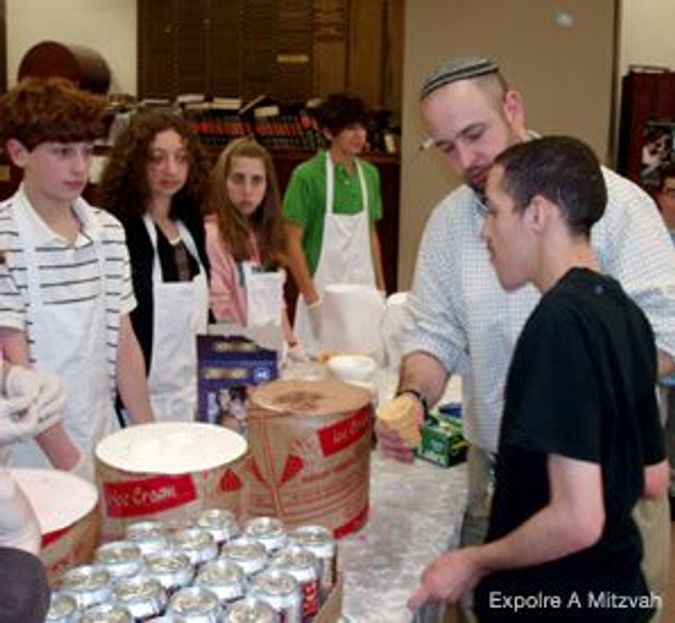 STAYING INVOLVED: Members of Explore a Mitzvah donate their time to serve up ice cream to people with developmental disabilities.

The program is still going strong: About 125 kids have raised close to $1.5 million at their bar and bat mitzvahs in the past three years. But even more significantly, it has now spawned an offshoot philanthropy program for teenagers between the eighth and the 12th grades to continue their efforts long after their 12th and 13th birthdays.

“I loved the experience and wanted to re-create it,” said Schwartz, now a 16-year-old sophomore at a private high school on Manhattan’s Upper West Side. “We’re older now, so we wanted a similar outcome but a different way of doing things.”

Schwartz added that she was thrilled to be participating “at the birth of the program,” which launched last year: “It’s exciting to see it grow up with me.”

Laurie Pine, a spokeswoman for UJA-Federation, said that people who had been involved in the initial bar mitzvah program were the first to seek out the new one: “After they became b’nai mitzvah, they didn’t want to stop being philanthropists,” she said. Thanks to the new program, “they don’t have to.”

Explore a Mitzvah is one of many success stories in a growing field. Around the country, young people who got their first taste of philanthropy at their bar and bat mitzvahs are looking for ways to stay involved in their later teen years.

“I’ve seen Jewish teen philanthropy grow by leaps and bounds in the last couple of years, on a local level and on a national basis,” said Jewish Teen Funders Network co-founder Ricky Shechtel, who also said that 20 different communities have contacted her group to express interest in starting programs of their own.

The high schoolers in Explore a Mitzvah have more autonomy than the 12- and 13-year olds in Give a Mitzvah — Do a Mitzvah, whose projects are crafted with the help of an adult program leader. As a team, the older teenagers in Explore a Mitzvah determine for themselves how they want to raise funds, and for whom. Last year’s group decided to help low-income Russian-speaking kids in Brooklyn who wanted to have their own bar and bat mitzvahs.

“We decided we wanted to focus on kids and other needy people we could relate to,” Schwartz said. “Our bar and bat mitzvahs were such meaningful experiences for us, and we wanted to create that for kids who couldn’t afford it.”

Schwartz and her nine teammates raised funds online last year through a UJA-sponsored Web site. They pulled in $6,000 — enough to sponsor a Jewish day camp with bar and bat mitzvah training for 100 kids.

UJA-Federation aims to recruit 20 kids — both newcomers and veterans of the first program — into Explore a Mitzvah this year. Each participant will be expected to raise at least $500 for a new project, probably once again on behalf of underprivileged youth. This year, Schwartz said, the organization wants to raise money through a bowl-a-thon.

Before his bar mitzvah, Ben Bleiberg, 15, worked with Give a Mitzvah — Do a Mitzvah to raise money to provide laptops for inpatients at the Mount Sinai Children’s Center Foundation in New York. In an interview with the Forward, he spoke passionately about the difference a few laptops could make.

“Kids [who] are in there for months at a time often get held back in school,” he said. “But if they have a laptop, they can keep up [with their class]. Literally, this can help them not be held back.”

For his bar mitzvah project, Ben also volunteered at Manhattan’s 92nd Street Y, playing viola and guitar with kids who have learning disabilities.

He became involved with Explore a Mitzvah last year.

“The experience was unlike anything I’ve ever done before,” Bleiberg said. “It wasn’t just about giving away money. It was also an instructive program in how to be a philanthropist, how to give away money in a way you want it to be used.”

That’s the whole point, according to Shechtel. “It’s so much less about the money they’re giving away,” she said. “It’s much more about teaching them about the way to give Jewishly.”

Eventually, Bleiberg said, this strategy should lead to more giving. “By [teaching you how to be a philanthropist], the program makes sure that you will keep giving away money and help out in your community after you’re out of high school and aren’t forced to do it.”

Not every kid who has used a bar or bat mitzvah as a launching pad for activism has done so in conjunction with other youth. While in middle school, Seattle resident Alex Klein, now 17, became “disenchanted with American politics and got interested in international development.” Around the same time, he met Blaise Judja-Sato, founder and chair of a not-for-profit called VillageReach, at a dinner party thrown by his parents.

Klein said that although he and his parents aren’t religious, he decided to have a bar mitzvah, partly to bring together an extended family spread out across England and South Africa. Instead of working at a soup kitchen for his bar mitzvah community service requirement, like most of the kids at his synagogue, he volunteered at VillageReach, which works to strengthen health systems in developing countries. He also had friends and family make donations to VillageReach in lieu of gifts.

Today, Klein remains one of VillageReach’s most treasured volunteers. On summer breaks home from the boarding school he attends in Massachusetts, he works at the organization, taking on increasingly complex projects with each passing year.

Last summer, he visited Mozambique, VillageReach’s primary beneficiary thus far. His research also helped the organization make an all-important decision about what country to work with next.

“At this point, it’s really more like an internship,” Klein said.

Although he doesn’t identify religiously, Klein said he sees a great opportunity in using bar and bat mitzvahs as a jumping-off point for activism.

“When you come from a privileged background, you have a responsibility to be part of your community,” Klein said. “A bar mitzvah is a great place to extend yourself outward and connect to the community around you.”