Bringing Ibsen Up to Date 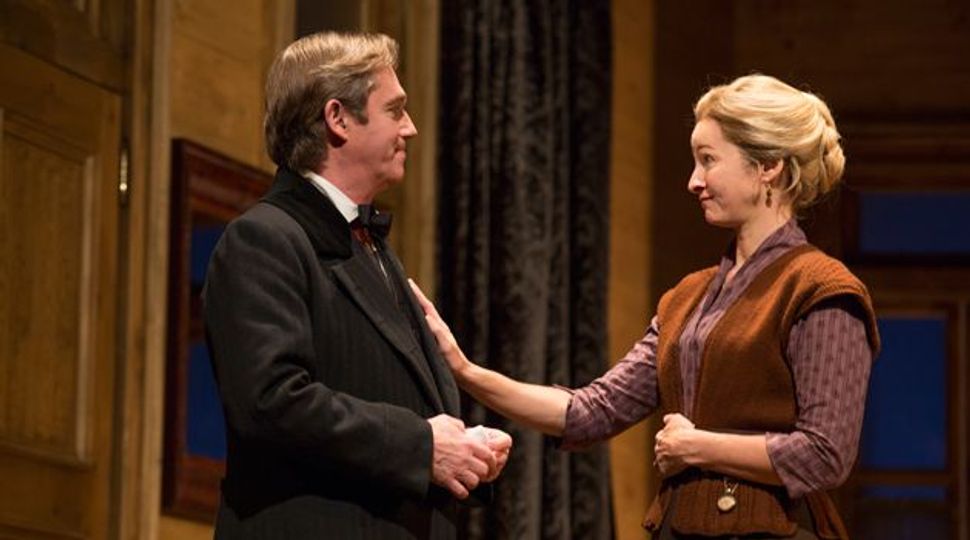 Enemies, A Love Story: Richard Thomas and Kathleen McNenny enjoy a brief respite from the gloomy universe of Henrik Ibsen?s ?An Enemy of the People.? Image by Joan Marcus

Contemporary productions of classical theater can sometimes — or, let’s face it, almost always — feel waxy and dead inside the glass casings of their own pageantry. Watching them can be a tedious ritual, one you submit to with dread. You know the play’s good for you because it’s so boring. That musty thing you smell is the play’s Importance. You leave, maybe having had a Cultural Experience, but not one with anything relevant to say about the world outside the theater doors.

Manhattan Theatre Club’s new production of Henrik Ibsen’s “An Enemy of the People,” which just opened at the Samuel J. Friedman Theatre on Broadway, avoids this sanctimoniousness in large part because of the sleek, smart new translation — or, as they’re calling it, “a new version” — by Rebecca Lenkiewicz.

Ibsen singlehandedly invented the “issue drama,” and in “An Enemy of the People,” the issue is censorship. The story revolves around a scientist named Thomas Stockmann (played in this production by Boyd Gaines, channeling a young-ish Teddy Kennedy) who, having uncovered a scandal involving poison in the water that feeds the spa in his small tourist town, is first embraced as a great reformer, then threatened, blackmailed and publicly excoriated so that the town can keep raking in the dough. Like all of Ibsen’s work, “Enemy” is full of feverish idealism and political fury, which is part of what drew Lenkiewicz to him.

I met Lenkiewicz in the patron’s lounge of the Manhattan Theatre Club. She presented a warm, inviting image — quick to laugh and often seemingly more interested in asking questions of her interviewer than promoting herself.

“I think he was very brave,” she said of Ibsen when we finally began discussing the play. “Very brave and very angry. And I think anger can be a very useful fuel for writing. It’s about freedom. I’m not religious in any way, but if I do have a belief it’s in freedom. That’s why this play appealed to me, because it’s about someone fighting to be free.”

Lenkiewicz’s adaptation touches on a host of issues that could have been ripped from this week’s headlines: environmental destruction, the capitalist imperative to put profit above people’s wellbeing, governmental and corporate corruption, politicians’ manipulation of the masses and, of course, the aforementioned censorship. At times the play feels like it was written in reaction to the Tea Party or the Occupy Movement — or, maybe most directly, to Julian Assange and the American government’s response to WikiLeaks, something Lenkiewicz and the cast discussed in rehearsal. Talking about Stockmann and his plight, she explained: “This is a man whom people are trying to silence, which is terrifying and which is happening on a daily basis all over the world, not just in the Third World. In the Western world, people are being silenced.”

Unlike Arthur Miller’s 1950 version, which scrubbed away some of Stockmann’s troublesome humanizing contradictions in order to more forcefully voice Miller’s outrage over the McCarthy trials, Lenkiewicz’s version allows Stockmann to be complicated, obsessive and deeply self-destructive, as flawed a character as has ever graced the stage. “I thought the play was about breakdown, mental breakdown. Not that he becomes insane or anything as black and white as that, but a huge change is happening in him at the time,” said Lenkiewicz. “Who is this man? Someone who chooses a way that is different and whether it’s negotiable in society and life. I’ve known a lot of people who have taken that path, who are on the edge, and who’ve either managed to negotiate it or who have lost their minds. Because it’s hard.”

It’s difficult to avoid thinking that Lenkiewicz is talking here about Robert Lenkiewicz — the infamous British Jewish artist whose last name she shares and who was for a time married to her mother, Celia Mills — and the community of social outcasts, vagrants, homeless and mentally ill people he painted, revered and supported. In an early chapter in his career that parallels the events depicted in “Enemy,” he was villainized and forced to flee London because the tramps and vagrants he encouraged to hang around his studio were seen as a public nuisance and a danger to the community by the police in his fancy Hampstead neighborhood. He eventually relocated to the dank working-class town of Plymouth in the south of England, and, unrepentant, created the same sort of community of outcasts there that had gotten him kicked out of London. He died of a heart attack in 2002.

Though Rebecca wasn’t directly related to him — “I was just this little illegitimate thing,” she says — she grew up inside the bohemian family that revolved around his studio next to the Jewish cemetery in town. One can sense his influence on her approach to art, both in what she does and does not think it can do.

Lenkiewicz is known primarily for her original work; she is, in fact, among the most respected young playwrights in England. Her play “Her Naked Skin,” about suffragettes in early-20th-century London, was the first play by a female writer ever produced on the British National Theatre’s main stage. She’s written about exotic table dancers and (how could she not?) derelict and sometimes defiant artists. She is now working on a new play about Marie Curie that will touch on an episode in Curie’s life in which, after having had an affair, she was chased from Paris for being a “vicious Jewess.”

“And she wasn’t Jewish, she was Catholic,” Lenkiewicz said. “I felt that was quite interesting. From being Paris’s darling, suddenly they were tarring and feathering her. And being incredibly anti-Semitic to someone who wasn’t Jewish. It was all just the mob mentality.”

If her stories often focus more on the characters than on her own political passions, the contexts in which she places these characters make clear that there’s a politics lurking not far under the surface of the work. Unlike Robert Lenkiewicz and Henrik Ibsen, though, she sees the limits of what art can achieve.

“I don’t think society will change hugely. I think art can make people think,” she said. “I’m doubtful that it can cause a revolution, but if anybody comes out with a slight shift, then something has been achieved.”

Joshua Furst is a frequent contributor to the Forward. He’s the author, most recently, of “The Sabotage Cafe,” a novel.

Bringing Ibsen Up to Date