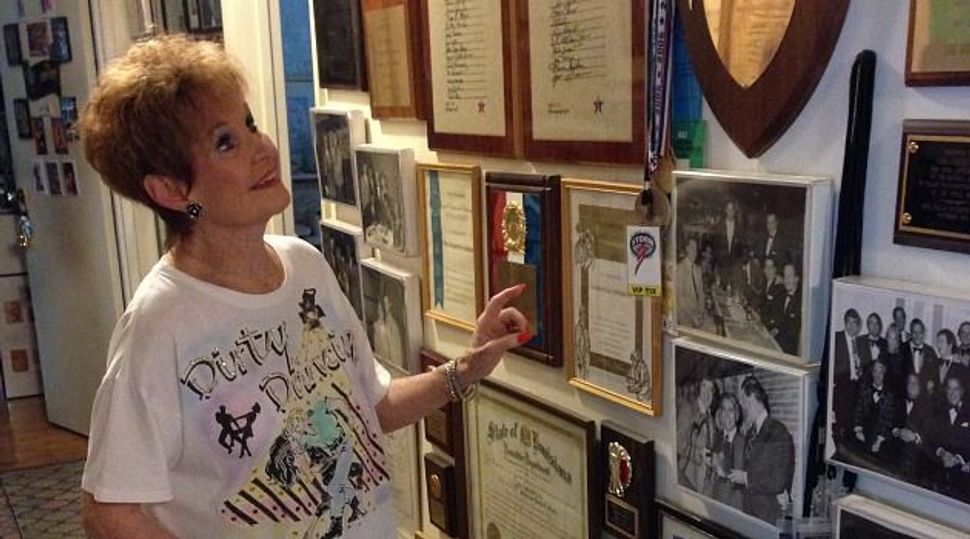 In the mid-1980s, Eleanor Bergstein returned to Grossinger’s Resort in the Catskills, where she had vacationed as a child during its heyday, to research her screenplay for “Dirty Dancing.” One night, she got a call from Hollywood.

“While I was on the phone,” she told the Forward, “the operator broke in and said: ‘You better hurry up! You’re gonna miss dinnah.’ I went downstairs. I’d gotten an off-the-shoulder dress; I thought, now I’m coming back as a grown-up, and it was so exciting. I looked at the room, and it was all filled with bearded men with yarmulkes! It was a singles weekend for Jews.”

The Catskills that Bergstein remembered from the 1950s and ’60s had been replaced by a struggling local economy and a growing Orthodox population. “There was almost no vestige of the way things were,” she said. “All I could do was re-create it in my 13-year-old imagination.”

Bergstein grew up in Brooklyn, where she competed in local dirty dancing contests, and spent her summers in the Catskills. Inspired by both environments, she wrote “Dirty Dancing” to capture the romance of partner (and dirty) dancing. She set it in the summer of 1963, before John F. Kennedy was assassinated and the radical action of the ’60s, when “traditional values” America was on the cusp of losing its stronghold.

To understand the Catskills’ golden years, Bergstein turned to hundreds of sources, including, first and foremost, dancer Michael Terrace, Bergstein’s Johnny Castle, who provided her with innumerable stories and unique access to the dancing world. Resort owner Paul Grossinger also consulted, as did dance instructor Jackie Horner, who contributed voluminous scrapbooks and details.

“Door’s open, darling! Welcome to my museum; entrance is free,” declared Horner, 81. She greeted me at her modest apartment in Liberty, N.Y., wearing sparkly black leggings and an oversize white T-shirt emblazoned with a pastel “Dirty Dancing” illustration. She has short red hair and wore red lipstick and a thick spread of bright-blue eye shadow. Horner got her start with New York City’s famous June Taylor Dancers before landing a full-time gig teaching at Grossinger’s in 1954 (she stayed until it closed, in 1986).

Horner’s apartment is a shrine not just to her career, but also to the world from which it emerged. “Dirty Dancing” paraphernalia abounds. Photos of her with famous celebrities of the era hang cheek to cheek on nearly every wall. Hundreds of pairs of dance shoes are stored in one closet; in another, there are dozens of gowns, wrapped in plastic. On shelves and tabletops sit menorahs and miniature Christmas trees (Horner’s father was Jewish, and her Protestant mother converted when Horner was a teen).

“Everyone said it would be a piece of fluff, a little Catskills movie,” Horner said of “Dirty Dancing.” “Opening night, the line was around the block.”

Everyone seems to have a Catskills story. Do you? Send us your memories and photos at [email protected]

The movie premiered in 1987, introducing audiences to the Catskills on the eve of decline. More than 25 years later, the film continues to resonate. The spin-off, “Dirty Dancing: Havana Nights,” came out in 2004, and a stage version debuted in London, New York, Sydney and Berlin, among other cities.

“Dirty Dancing” illustrates the triumph of nostalgia, revealing just how meaningful Catskills mythology has become. No one knows that more than Bergstein.

“Baby believed, as did I, that if you reached out your hand and your heart, you could make the world better,” she said. “One of the reasons Baby’s father was a hero is because he could have lost his medical license [for helping Penny after her illegal abortion]… I wanted to show what would have happened if we had illegal abortions,” she added, making reference to today’s sociopolitical skirmishes over Roe v. Wade. “These battles go round and round. They’re never won.”

Abigail Jones is the senior editor and head of special projects at The Forward. She also edits its women’s blog, The Sisterhood. Find her on Twitter @abigaildj