The secret Jewish history of the Beach Boys 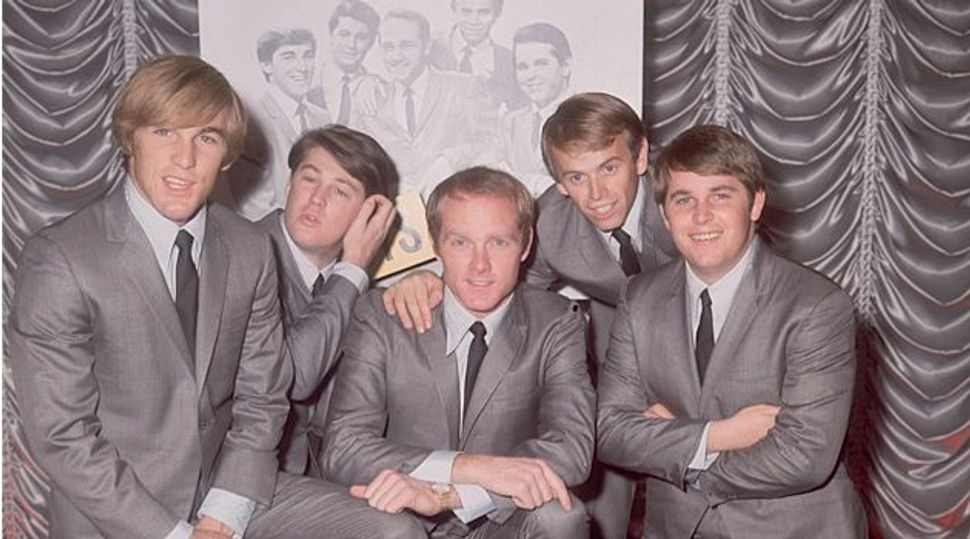 Having Fun Fun Fun ‘Til Her Daddy Takes the T-Bird Away for Shabbos: The Beach Boys as seen in 1964. Image by Getty Images

Editor’s note: A version of this story was originally published on August 6, 2014.

Going to the beach, surfing, and driving around looking for girls aren’t exactly the stuff of which Jewish dreams are typically made — at least not where I come from. Maybe that’s why the songs of The Beach Boys never moved me the way the songs of The Beatles did, which expressed aspirations to be a paperback writer or to complain about paying taxes or to lament the passing of yesterdays. (You can almost hear the “Oy, vey” in that one.) But as it turns out, there’s more to The Beach Boys’ story and songs than idle sun worship at the beach.

As almost everyone knows, The Beach Boys  were primarily a family group, comprised of the brothers Wilson — Brian, Dennis and Carl, and cousin Mike Love — and their pal, Al Jardine. But as almost everyone doesn’t know, one of the founding members of the group was David Marks, the nice Jewish boy who lived across the street from the Wilsons and whose guitar playing on The Beach Boys’ first three albums of surf-rock hits helped shape their distinctive sound. David Marks’s contributions as a founding member of the band have been forgotten in large part through the efforts of the Wilson boys’ domineering father, Murry, who did all he could to erase David’s role from the band’s history.

It wasn’t always such. The Markses and the Wilsons started out as friendly neighbors, with their children in and out of each other’s houses all the time. When The Beach Boys began playing concert tours outside the immediate vicinity of their native Hawthorne, California, Murry Wilson, who acted as the group’s manager, sent David’s father, Elmer Marks, with them as tour manager and guardian; most of them were still teenagers.

Jo Ann Marks was the hip, young mom, a colorful figure who welcomed David’s friends into her home. She was young and good-looking, and both Brian and Murry Wilson are said to have had crushes on her. Some allege Murry sent Elmer on the road with the band so that he could spend time alone with his neighbor’s wife. Jo Ann was also an amateur psychic who talked to Brian about the powers of unseen vibrations, ideas that would fuel the group’s first million-selling single, “Good Vibrations.”

David Marks’s time with the group was brief. He left after just two years, quitting at age 15, tired of being treated like a fifth wheel by Murry Wilson, who never seemed to accept him as part of the group. Oddly enough, Marks had a one-fifth ownership of The Beach Boys, together with the three Wilson brothers and Mike Love, so technically one could say that Murry worked for him. In contrast, in all the years that Marks’s replacement, Al Jardine, has played with The Beach Boys, he has been a hired hand, a singer and guitarist whose main role was to recreate the distinctive, reverb-drenched sound of David Marks’s guitar, which featured on the group’s first series of hit songs.

While Marks was still with the group, they all began hanging out at the home of Marilyn and Diane Rovell, who were classmates of Carl Wilson and David Marks at the Hollywood Professional School, a private performing arts academy. Since Carl was old enough to drive, he drove David to school each day. The boys would typically give the Rovell sisters a ride back to their house in the heavily Jewish Fairfax district of Los Angeles. Marks would later describe the girls’ mom, Mae Rovell, as “the quintessential Jewish mother,” who always had matzo ball soup brewing on the stove and a kitchen full of homemade cakes.

All the Beach Boys, as well as their musician friends Jan and Dean, started hanging out at the Rovells’s house, which became “the unofficial Beach Boys clubhouse.” Brian Wilson began dating Marilyn, even though he was 20 and she was just 14; when she was just 17, Marilyn Rovell became Marilyn Wilson. Brian and Marilyn had two daughters, Wendy and Carnie Wilson, who as adults formed the pop trio Wilson Phillips with Chynna Phillips, the daughter of John and Michelle Phillips of the Mamas and the Papas.

By the mid-1960s, The Beach Boys had essentially split into two separate entities. The touring group, which no longer included Brian Wilson — who never enjoyed performing live and who suffered from various psychological ailments — was and is to this day a nostalgia act, playing mostly surf-rock hits from the band’s first few years, including “Surfin’ USA,” “I Get Around,” “Fun, Fun, Fun,” and “California Girls.” The studio entity was the brainchild of Brian Wilson, always the group’s main creative force, who took The Beach Boys into uncharted territory on the 1966 experimental album “Pet Sounds.” Often considered the forerunner of The Beatles’ “Sgt. Pepper’s Lonely Hearts Club Band,” the album “Pet Sounds” features songs like “Wouldn’t It Be Nice,” “God Only Knows,” and the aptly titled ode to depression and social alienation, “I Just Wasn’t Made for These Times.” The album also includes a rock ’n’ roll version of an old folk song called “Sloop John B,” to the tune to which, oddly enough, the Hebrew folk song “Dror Yikra” is often sung. (I dare you to YouTube it.)

When it came time to record these rock ’n’ roll masterpieces, including “Good Vibrations,” which was released only as a single (the projected album it belonged to, “Smile,” was never completed), Wilson knew that his bandmates weren’t really up to the task instrumentally. They could sing and harmonize, but the music was too complex and intricate; there was no way they could play what was in Wilson’s head. So he turned to the mostly Jewish corps of Los Angeles session musicians led by drummer Hal Blaine and unofficially known as The Wrecking Crew. Among those who actually played on The Beach Boys’ most critically acclaimed tracks are organist Mike Melvoin, pianist Larry Knechtel, guitarist Barney Kessel, saxophonist Steve Douglas (born Steven Douglas Kreisman) and keyboardist Don Randi (born Don Schwartz).

In the land of The Beach Boys, it’s “Endless Summer,” as their 1974 greatest hits compilation was called. They may well be coming to a theater near you one of these days. Over the years, the band’s personnel has frequently changed. In 2012, the surviving original members, including Brian Wilson, Mike Love, Al Jardine and David Marks, regrouped for a 50th anniversary tour (Carl and Dennis Wilson are deceased). Mike Love has been the most active touring performer of the last few decades, often appearing with longtime member Bruce Johnston. To paraphrase Brian Wilson, God only knows who you’ll actually see perform when you next buy a ticket to a Beach Boys concert.

The secret Jewish history of the Beach Boys