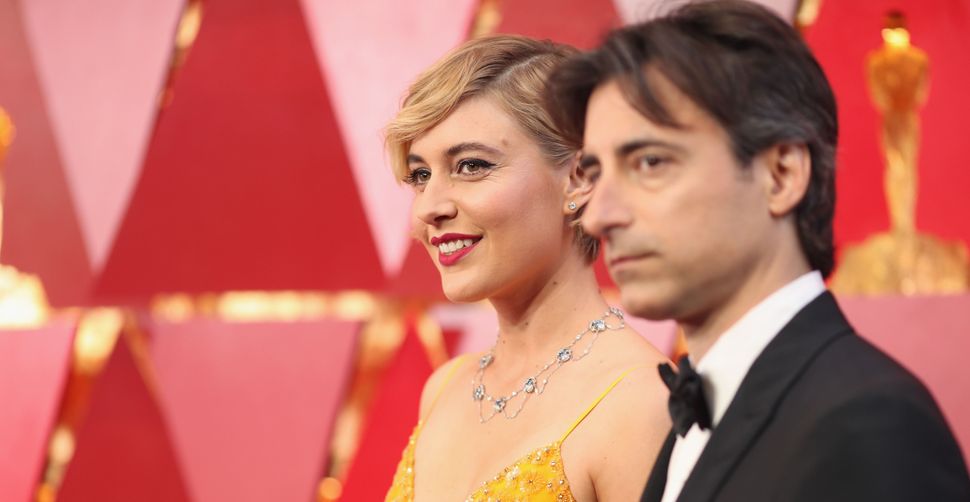 The Hollywood Foreign Press Association is continuing its love affair with Jewish filmmakers with the 2020 Golden Globe nominees. We don’t expect that members of that outfit are particularly interested in Jewish geography, but here at the Forward, our offices are plastered with headshots connected by yards of red thread and dates of b’nai mitzvah.

So we’re not content to tell you which nominees are Jewish. We want to let you know just how they’re all connected. Who is nominated alongside —- or in competition with —- their own kin? Which actors are — through the power of remakes and movie magic — sharing nominations with their younger selves?

It’s a complicated web; we’ll guide you through it. Read on.

In the TV realm, spouses Michael Chabon and Ayelet Waldman’s work on the miniseries “Unbelievable,” which they co-created with Susannah Grant, is being considered for Best TV Limited Series or Motion Picture Made for TV. “Unbelievable” also garnered acting nominations for Toni Collette, Merrit Weaver and Kaitlyn Dever.

Another formidable couple are Amy Sherman-Palladino and Daniel Palladino, who are up for best TV Series — Comedy for “The Marvelous Mrs. Maisel.” (Their leading lady, Rachel Brosnahan — not Jewish, but very good at acting it — is up for Best Actress in a TV Series — Musical or Comedy.)

Tribe member Noah Baumbach’s “Marriage Story” is a big contender, netting acting nominations for leads Scarlett Johansson and Adam Driver, a nod for Baumbach’s screenplay and a nomination for Best Picture — Drama. “Little Women,” directed by Baumbach’s non-Jewish partner Greta Gerwig, has two nominations for Alexandre Desplat’s score and for Saorise Ronan’s performance as Jo March. (Ronan is Irish Catholic but was born near Riverdale, in the Bronx — just saying.)

Cousins Randy Newman and Thomas Newman are in direct competition for Best Original Score — Motion Picture. Randy Newman is nominated for his work on “Marriage Story” — not to be confused with his work on “Toy Story 4,” nominated for Best Animated Feature Film — and Thomas Newman is up for his music for Sam Mendes’s “1917.” Mendes, one of our finest stage and screen directors, is up for Best Director for the film, which may also take home the statue for Best Motion Picture — Drama.

BFFs Ben Platt and Beanie Feldstein are each up for acting awards. Platt gained recognition for his work in “The Politician,” a Netflix show in which Gwyneth Paltrow and Bob Balaban played his adoptive parents, and Feldstein, sister of Jonah Hill, earned a nod for Best Performance in a Motion Picture — Musical or Comedy for “Booksmart” — which also stars fellow nominee Kaitlyn Dever.

Platt and Feldstein will share the screen in Richard Linklater’s film adaptation of Stephen Sondheim’s “Merrily We Roll Along,” which will film over the course of 20 years. While no Sondheim vehicles were eligible for this year’s Golden Globes, Best Actor in a Comedy nominee Daniel Craig was seen singing “Losing My Mind,” from Sondheim’s “Follies” in “Knives Out,” the film for which he’s nominated.

Alan Arkin is nominated for Best Supporting Actor in a Series, Limited Series or Motion Picture Made for Television for Netflix’s “The Kominsky Method.” (Michael Douglas, whose father Kirk Douglas was born as Issur Danielovitch, is nominated as a lead actor for the show.) Meanwhile, the non-Jewish Christopher Abbott is nominated for his turn in a role Arkin originated in the 1970s: that of John Yossarion, the main character of “Catch-22,” for the new Hulu adaptation of Joseph Heller’s iconic novel. Abbott brings a different take to the character (who, there is ample evidence to suggest, is based on a Jew), but screams just about as well as Arkin did.

But the two most mind-bending nominations for actors belong to Paul Rudd and Natasha Lyonne, both nominated for Netflix shows where they play multiple different (if only slightly different) versions of themselves. Rudd is nominated for “Living with Yourself,” a series in which he plays both the central and his clone, and Lyonne is nominated for “Russian Doll,” wherein she plays various reincarnations of the same character, each of whom dies and is reborn in a former Yeshiva building on the evening of her 36th birthday.

A Driver Of Influence

Based on our maniacal scatter plot, having Adam Driver (who isn’t Jewish, but had us fooled) in your orbit is a great way to ensure success. The Coen brothers, Baumbach and Gerwig have all collaborated with him. The latest to rub against his impossibly broad shoulders is Annette Bening, who is nominated for Supporting Actor for her embodiment of Senator Dianne Feinstein in “The Report,” starring Driver as her Senate staffer. And as this picture proves, Henry Winkler, nominated this year for his supporting role on the HBO show “Barry” has made contact with Driver backstage at Seth Meyers. With Driver on his side, towering over him, Winkler just might win this year.

In Scorsese We Trust

But while Scorsese has maligned superhero films in recent weeks, a super-villain origin story informed by his early films “The King of Comedy” and “Taxi Drive,” is in direct competition with his mobster epic. Yes, “Joker,” the controversial Golden Lion winner is up for Best Picture — Drama, Best Actor for Joaquin Phoenix and Best Director for Phillips.

The Stars of the Jewish Speech Team

Patricia Arquette, known for her politically incisive acceptance speeches, will be one to look out for on Globes night, should she nab an acting award for her role in limited series “The Act.” We might also expect that should HBO’s “Chernobyl” take home the prize for Best Television Limited Series or Motion Picture Made for Television, creator Craig Mazin will bring some timely heat.

But the most serious speechifier to look out for is “Borat” star Sacha Baron Cohen, whose speech at the Anti-Defamation League conference went viral last month. If Baron Cohen wins for his role as Israeli agent Eli Cohen in Netflix’s “The Spy,” he can be relied on for a quotable moment — and maybe even a call to action.