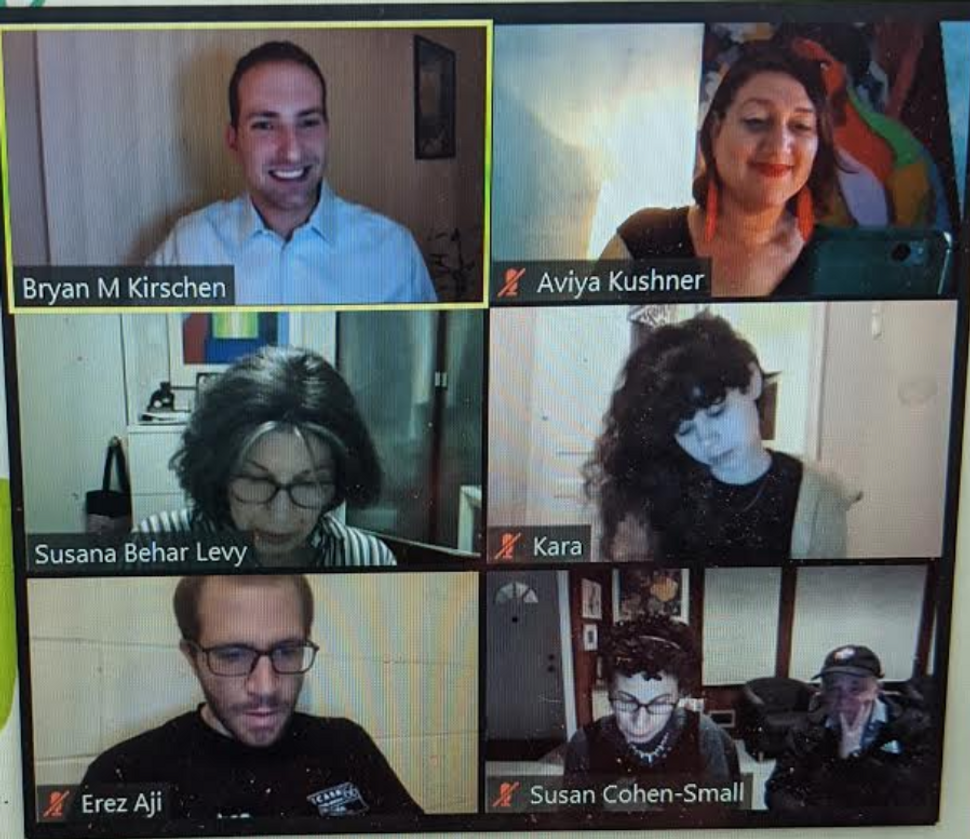 A remarkable class in Ladino — held entirely online on Zoom — is attracting hundreds of people from around the world, all using the time locked down at home to take advantage of a rare and free course offered through the Sephardic Jewish Brotherhood of America’s digital academy.

Ladino is one of the most important diasporic languages in Jewish history. Also known as Judeo-Spanish, or Judezmo, Ladino is a Romance language — a variety of Spanish that includes both words and phrases from Hebrew, Turkish, Arabic, Greek, French, and Italian. It originally developed in medieval Christian Spain; after the expulsion of the Jews in 1492, it moved along with Jewish exiles, and then developed independently of Iberian Spanish.

For five hundred years, Ladino thrived, and was the mother tongue of generations of Sephardic Jews. Today, it has been designated an “endangered” language by UNESCO — though you would never guess from the massive turnout for Ladino via Zoom.

“I initially thought a few people would attend these sessions, but the numbers have been outstanding and more than I could ever imagine,” said Dr. Bryan Kirschen, who teaches the course and is Assistant Professor of Spanish Linguistics in the Department of Romance Languages and Literatures at SUNY-Binghamton.

“During the last session, more than 200 unique users signed onto Zoom, many with more than one person behind each screen — sometimes entire families. To date, more than 400 people have signed up for this class.”

And they are Zooming in from all over the U.S., Canada, and Mexico, and many other countries.

“We have had participants join from Turkey, Israel, Argentina, and Japan, even with the time differences,” Kirschen said.

Lida Nosrati, a literary translator in Toronto, Canada, who has been Zooming into class, became interested in Ladino through music.

“I came into the class mostly out of love for the few Ladino songs I have heard and known over the years, and partly out of curiosity for how the little Spanish I know will play out,” Nosrati said.

“Little did I know that the very first words I’ll be greeted with are ‘dafter’ ‘kalem’ ‘mashallah’ ‘hanum’ ‘aman’, the words marking and making the canvas of my everyday life and tongue (Farsi) by way of other tongues (Turkish, Arabic and more).”

“So it was no longer a curiosity,” Nosrati said. “It was a familiarity, an acquaintance I did not even know I had.”

Tidhar Carmeli, a San Francisco software engineer specializing in products for overseas markets who works with many languages, said that one aspect of learning Ladino that he liked is that “the somewhat archaic Spanish component reminds me of the Italian I grew up with.”

Carmeli also enjoyed “discovering the etymology of Ladino loanwords; for example, a number of Turkish words seem to be Persian and/or Arabic cognates.”

The five-session beginning Ladino class is held on Monday nights at 8 EST, though for some participants, that means 3:00 AM.

The structure of the class assumes that students have no prior Ladino experience. The first class focused on greetings and introductions. The second class was about pronunciation and interests; the third class focused on counting as well as a comparison of verbs for “to be,” and the fourth class focused on the verb “to have” in Ladino as well as what Kirschen called “intercultural competence.”

That has meant snippets of music as well as parts of a play, and sample dialogues so students can hear how Ladino speakers use the language in daily life.

The international nature of the students, or elevos, in Ladino, has led to a lively chat function during the class as students comment on whether a word also appears in Portuguese, Turkish, Italian, or various dialects or local slang that they or their grandparents spoke. Sometimes regional differences in Ladino pronunciation light up the chat and the class questions.

This is an unexpected plus in the Zoom era.

“I want to respond to everyone, but I have noticed something beautiful in that participants are helping each other along,” Kirschen said. “If participants miss a word, have a question they don’t want to ask during my demandas (questions) periods, they have a place to go for help from their “classmates.”

“Being virtual, the class brings together geographically distant students who wouldn’t ordinarily meet,” Carmeli said. “I think this enriches the learning experience.”

Scrolling through Zoom, I noticed several well-known names in the Ladino world, along with writers and scholars who specialize in Jewish culture.

“Leading Ladino-language activists and educators have also been attending this class as a way to see how the language is being taught,” Kirschen noted. “A number of professors, especially of Spanish are also in attendance.”

One highlight of the class has been people quoting their grandparents — their jokes and sayings.

“Several (young) participants have emailed me saying that their grandparents spoke Ladino but they never had the opportunity to learn the language — until now. Some are in places that are rather removed from Sephardic communities today.”

And Kirschen makes a point of noticing variations in Ladino, which students often bring up. “I want participants to realize that Ladino — or, well, Judeo-Spanish, is a language that encompasses many varieties.”

Though many participants are Sephardi, and at least a few seem to be native Spanish speakers, there are also Ashkenazi students.

“I realized that a number of students taking this class were Ashkenazi, several of them speakers of Yiddish,” Kirschen said. “I thought that adapting sections of David Fintz Altabé’s “Orchard Street Blues,” was perfect for that.

Another interesting aspect of the class is that there are many Ladino speakers among the total beginners.

“I also realize that there are actually speakers of Ladino who are joining this class because they want to witness the interest in the language themselves and because they have never actually taken a Ladino “class” before,” Kirschen said. “I try to anticipate questions they might have also, even though I make sure to announce at the start of each class that the focus of the class is for beginners.”

Each class ends with a flood of students typing mersi muncho — or “thank you very much” — in the chat function. One of the thankful students is Nosrati.

“Before the class, I knew how to sing one Ladino song: a la una yo naci,” Nosrati said. “It’s still the only Ladino song I know by heart, but now also from the heart. Mersi muncho, mi kerida amiga, for bringing us together.”

The fifth and last Ladino class will be this Monday night; each class begins with a review, and Kirschen plans to post materials online for those who wish to continue studying at home, wherever home may be.

Registration information for Ladino through Zoom can be found here: