The CPAC stage in 2021 Courtesy of dailybeanspod

At the just-wrapped Conservative Political Action Conference, or CPAC, headlining speaker Donald Trump made an inflammatory speech from a strange, zig-zagging stage. The speech, of course, drew attention, but it featured largely the kind of content we have grown to expect from the former president. The stage itself, however, drew anger for its shape — identical to that of the Odal or Othala rune, historically used as a Nazi insignia.

There is nothing inherently antisemitic about the basic Othala rune, which indicates an O sound in a Proto-Germanic language; the rune stands for estate, property and inheritance. But the Nazi party employed a variant of the rune with added serifs, or “feet” as the symbol of the SS Race and Settlement Office as well as a division of the Volksdeutsche, a movement of ethnic Germans who lived outside Germany and did not hold German citizenship. It is classified as a hate symbol and a neo-Nazi symbol by the ADL. This version with added feet, which was created by the Nazi party in the 1930s, was used for the CPAC stage.

Odal rune variants with the Nazi version in the middle. Courtesy of wikimedia

The SS Race and Settlement Office included genetic scientists who were in charge of making sure SS officers and their wives remained “pure,” as well as reassigning formerly Jewish-owned land that the Nazis had seized. It was the office in charge of the heart of the Nazis’ racist philosophy, studying the supposedly superior Aryan traits and trying to reproduce them in order to “Germanicize” sufficiently white Poles and Ukrainians by overseeing their marriages. 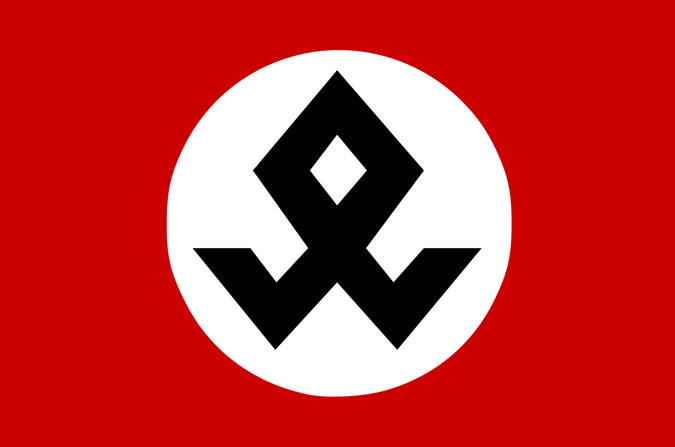 Matt Schlap, the CPAC chairman, called comparisons between the rune and the CPAC stage “outrageous and slanderous.”

But the rune is a unique shape, and one that is not obviously conducive to a conference stage, given that it has a large hollow space in the center — all speakers emerging from backstage needed to take a circuitous zigzagging route to the lectern, and the number of people the stage could hold was limited.

While the rune’s history may not have been known by all the organizers, it’s not an obscure historical relic; the Othala rune is still an active symbol. In more recent years, the rune has been used by the far right White Liberation Movement in South Africa and neo-Nazi groups in the U.S. and New Zealand. It is also still a part of pagan movements and used by those practicing Nordic religions, which often have a significant overlap with white supremacist movements.

Paganism, like the original Othala rune itself, is not inherently antisemitic, but is often tied to white supremacist movements. “The idea of a racialized culture belonging to whiteness is a key engine of the far right,” Talia Lavin writes in her book “Culture Warlords.” This is the same appeal as the runic symbol held for the Nazis Volksdeutsche, an idea of returning to the true and ultimate German people, and it still operates in today’s white nationalist movements. Some white supremacists, looking for a white history that is divorced entirely from Jewishness or any other minority, often end up in Nordic or pagan mythologies. “Jesus, after all, was a Jew,” Lavin writes. “This is perhaps the ultimate example of how difficult it is to transcend antisemitism; you can literally be Jesus Christ and it won’t be enough for some people.”

The CPAC stage in 2021 Courtesy of dailybeanspod

CPAC is not, at least overtly, full of pagans. Josh Mandel, an Ohio Republican running for election, thanked the organizers for being “Christian Zionists” in response to the stage scandal. But Christian Zionists do have a long history of antisemitism.

This year, CPAC was careful to keep overt antisemitism and white nationalism out of the conference, canceling Young Pharaoh as a speaker for his antisemitic remarks. But the increasing anti-minority and white supremacist tilt of Trump’s followers has been clear for a long time, even before the attack on the Capitol. But white supremacy doesn’t have to be explicit to still be there. If nothing else, it seems a fitting accident.