Paul Rudd, Zoë Kravitz, Henry Kissinger and Mark Zuckerberg are going to have an exciting 2022. Photo-illustration by Getty/Jake Wasserman

2021 was a year of new beginnings — not just for our newly reopened society, but also for the coronavirus pandemic, which continues to mutate into increasingly scary-sounding novel Greek letter variants.

And so, we end 2021 on a note of uncertainty. In a year like this, when Taylor Swift surprised us with a 10-minute chart-topper originally written for a decade-old album, Drake boycotted the Grammys and Facebook began its shadowy metaverse, we need a dependable sense of what to expect in 2022.

My last go at this prediction game yielded surprisingly accurate results. (The rules: predictions must be funny, and if they turn out to be right, that’s largely accidental.) Benjamin Netanyahu did finally lose an Israeli election, although his subsequent career moves haven’t taken him on “The Masked Singer” — at least not yet. HAIM did release a single of sorts mentioning Canter’s Deli, although, tragically, Vampire Weekend did not appear to be involved.

This year, as every year, I strive to be even more precise, consulting the stars, Sleepytime Tea leaves and almanacs of years ending in ‘22, and, above all, just following that feeling in my kishkes.

Without further ado, here are my 22 absolutely on-the-mark pop culture predictions for the coming year.

1. The Israeli Ministry of Culture unveils an NFT of the Kotel. The Chief Rabbinate of Israel convenes to debate whether this counts as idolatry.

2. Paul Rudd’s 2021 Sexiest Man Alive title is revoked on a technicality when he is revealed to be a charming, ageless vampire. “See, he’s not alive but undead,” a People spokesperson says. Rudd, who remains ravishingly handsome, clarifies that, like the Cullens of “Twilight,” he only eats animal blood and doesn’t go around biting people — a disappointing development for many willing familiars.

3. Mark Zuckerberg, itching to enter the outer-space space alongside the likes of Jeff Bezos and Elon Musk, announces Metamissile, Meta’s orbital flight program. (Meta stock plummets as investors fear an association with digestive health — Metamucil gets a bump.) The inaugural passengers include Buzz Aldrin, Arnold Schwarzenegger and Zuckerberg’s Uncle Alvin, a NASA enthusiast who always showed off his moon rocks at family seders. The shuttle, meant to land after two hours of orbital flight, never returns. 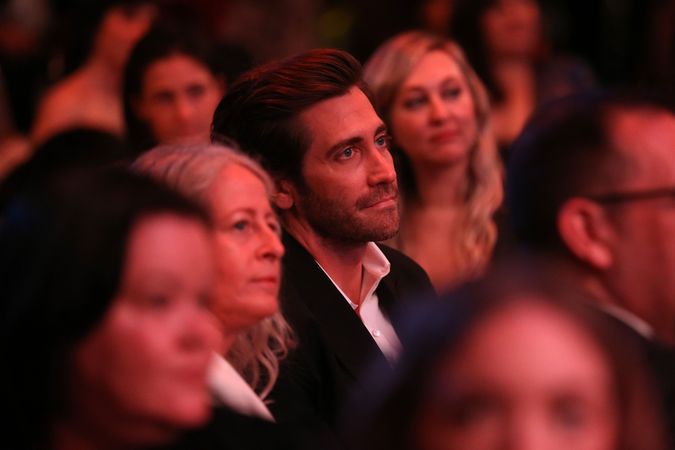 “SO CASUALLY CRUEL IN THE NAME OF BEING HONEST” — the Pope, when asked about the scarf affair.

4. After a worldwide petition, threats of sanctions from the UN and a long run on the Hot 100, Jake Gyllenhaal is made to finally return the scarf Taylor Swift mentioned in “All Too Well (Taylor’s Version).”

5. The International Space Station receives a transmission from what they believe to be the Metamissile. After reestablishing contact and asking to speak to the astronaut onboard, the control team spends 10 minutes listening to Alvin Zuckerberg walking the length of the ship calling “Buzz? Buzz? It’s for you! Buzz?” before Aldrin is able to give the ISS a status update.

6. After a nationwide search, Hadassah Levine, 63, president of the trivia league at Temple Beth El in Coral Gables, Fla. is named the new permanent host of “Jeopardy!”

8. Japanese Breakfast, the performing name of musician Michelle Zauner, joins HAIM and Impossible Meats to produce a new line of meatless breakfast ham, J.B. Haim. Its kosher status is broadly debated in Jewish circles, but Canter’s Deli wastes no time adding it to their menu.

9. Adam Sandler, after being spotted noshing on street pickles in unglamorous winter wear one too many times to escape the internet’s notice, launches a fashion line, Happy Madisons. Dubbed “shlubleisure” by GQ, its signature items include pre-rumpled shorts, graphic tees inspired by the shops on the Venice Boardwalk and a partnership with Adidas that bundles long tube socks with low-top sneakers. The brand kicks off, true to Sandler fashion, with a series of ads featuring his comedy chums Kevin James, Chris Rock and David Spade. (Rob Schneider is snubbed.)

10. Bitten by the musical bug, and disappointed by the tepid box office showing of “West Side Story,” Steven Spielberg endeavors to film “Starlight Express,” an Andrew Lloyd Webber musical about a space-themed train set. James Corden — of course — stars as Ashley the Smoking Car.

11. Failing to secure accreditation for her controversial University of Austin, Bari Weiss aims for a younger audience, creating a line of baby tapes a la Baby Einstein featuring infant avatars of anti-woke crusaders like David Mamet, Andrew Sullivan and Caitlin Flanagan. The tapes become a surprise hit across ideological lines when parents discover they are very effective at putting children to sleep.

13. Lin-Manuel Miranda, who continues to be Yeshiva University’s most high profile pitchman, announces a partnership with YU’s theater club to launch a new musical about the life and times of Benjamin Cardozo. A sample lyric: “Everybody knows I’m the poet laureate of jurisprudence/Repping Common Law just like I’m reppin all the Juden/You know my reputation, my legal acumen/Appeal to me as Chief Judge, but you can call me Ben.” 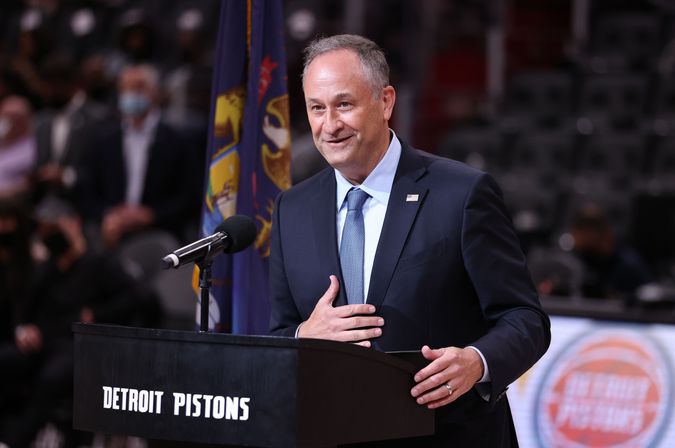 Doug will bring a steady hand, and some embarrassing dad jokes to the bris. One starts “foreskin and seven years ago…” Photo by Getty/Gregory Shamus/Staff

14. Second Gentleman Doug Emhoff becomes the first vice presidential spouse to be certified as a mohel.

15. NASA HQ in Houston picks up a video message from the Helix Nebula. Codebreakers decipher a Quicktime file of a hooded figure calling himself Grand Imperator Sporp, who says he made contact with the Metamissile and is taking Alvin Zuckerberg to his home planet while releasing the other astronauts. Evidently, Alvin, after protesting that his nephew is a macher on Earth, sealed his own fate as a high-value captive. His ransom is set at 800 Bitcoins, as the aliens of the Helix Nebula are now “dabbling in crypto.”

16. Hanukkah 2022 welcomes a new, divisive Elf-on-the-Shelf-like plush creature in the form of the “Shammash Shrimp.” Target also draws the ire of Jewish consumers by producing Hanukkah merchandise featuring etrogs, matzoh and an image of the infamous Jewish heretic Shabbetai Zvi.

17. Seth Rogen develops a pottery wheel that you can smoke pot with.

18. Kanye West, finally catching wind of Leonard Cohen’s mean poem about him, releases a diss track of the late singer-songwriter that samples “Dance Me to the End of Love.” It’s in poor taste, sure, but it’s actually West’s best single in years. 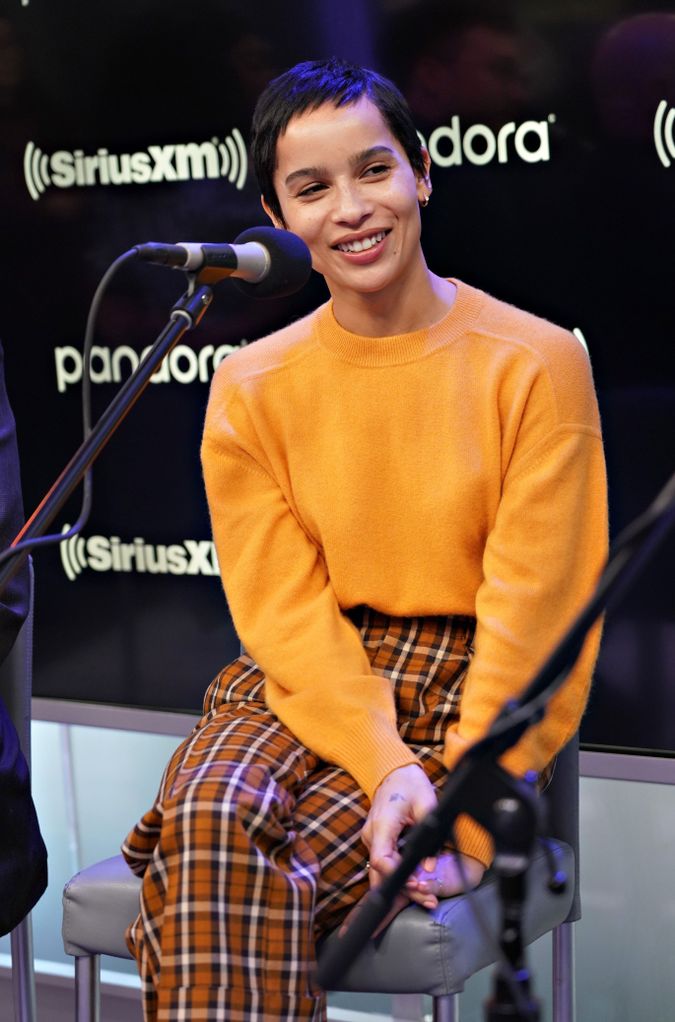 “The cats mostly got along,” Kravitz will say. “But one — I called him Eric Adams — definitely had domain over the scratching post.” Photo by Getty/Cindy Ord/Staff

19. In press junkets for “The Batman,” Zoë Kravitz reveals that in preparing for her role as Catwoman, she made regular visits to former New York City mayoral candidate Curtis Sliwa’s studio apartment to observe his herd of feline companions’ behavior in a cramped, urban environment. Ladies and gentleman, your new 007. License to kvetch. Image by Getty/Jake Wasserman

21. Mark Zuckerberg reaches a deal with the aliens of the Helix Nebula for his Uncle Alvin, offering them 600 Bitcoins and 20 Dogecoins. Alvin Zuckerberg refuses to return to Earth until his nephew also gives him money for a new winter coat, “preferably Gore-Tex.”

22. Sally Rooney’s new campus novel, “Respectful Differences,” follows the tortured interior monologues and lengthy ideological email exchanges of two Columbia University undergrads — one a member of the college’s J Street chapter, the other the president of the student Jewish Voice for Peace. The Forward writes 65 articles about it.