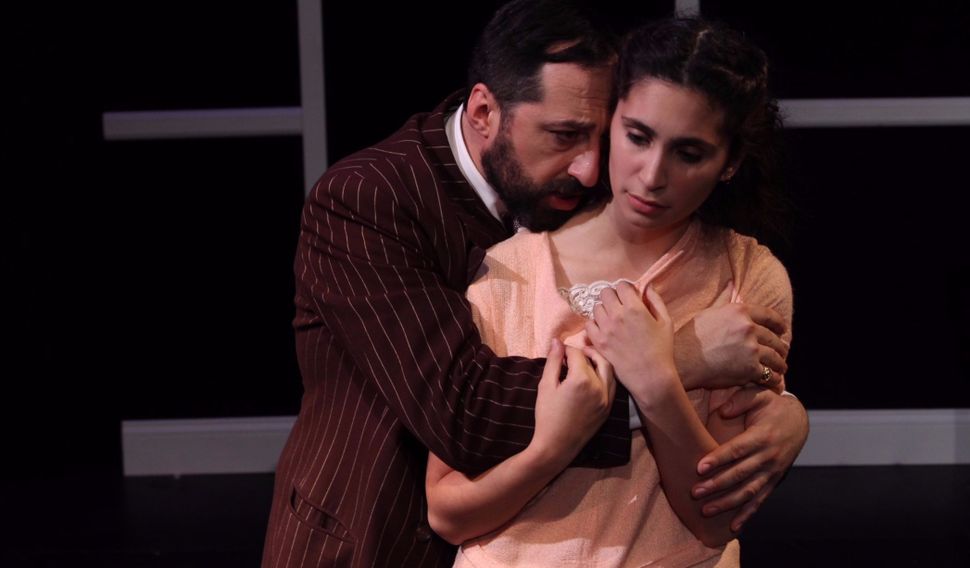 “In New York you’ll see people of many backgrounds sitting in the theater, also a surprising number of young people,” Asheri said. “There’s curiosity here. Of course there are many older people in the audience who are nostalgic for their home language. But at Yiddishpeil [a 30-year-old Yiddish theater in Israel] it’s almost exclusively a graying audience.”

Yiddish, which still evokes an array of conflicting feelings in Israel, has never been favored thereby the powers that be. The seniors who file into Yiddishpeil are expressing nostalgia, but also, according to Sandler, Holocaust fetishism.

“Yiddish is identified with the Holocaust and they can’t let it go,” he said, sounding agitated as he paced back and forth in the theater’s dressing room where we met. “Yiddish is not about the Holocaust. It goes way beyond that with its great poets and writers. My dream is to keep Yiddish alive in a post-Holocaust world.”

Both actors, who are Yiddishpeil veterans — Sandler also boasts a host of film credits — have relocated to New York with their sights set on launching theater careers here. They are especially pleased to be working with the nine-year-old New Yiddish Rep, whose mission is so in synch with their own: to forge vital theater — modern classics that have been translated into Yiddish along with Yiddish language plays — that will reach a broad audience, not only Yiddish speakers. English (and sometimes Russian) supertitles are provided.

New Yiddish Rep’s artistic director David Mandelbaum joined us, adding that he is determined to keep Yiddish alive and show how singularly expressive and modern the language is. He wants to train a new generation of Yiddish speaking theater artists who may or may not be Jewish.
“Awake and Sing!” first presented by the Group Theater in 1935 — with Stella Adler, Luther Adler, Morris Carnovsky and Sanford Meisner — recounts the lives of a lower-middle-class extended Jewish family living in the Bronx. There’s Bessie, the matriarch (Ateri), her Communist father Jacob (Mandelbaum), her philosophically idealist son Ralphie, her unhappily married daughter Hennie and the house boarder, Moe (Sandler), a showy gambler who elopes with Hennie.

“The family’s economics has tremendous resonance today,” said Mandelbaum who directed the piece. “So do the politics. Its theme: You can’t just talk your passions away. And performing the play in Yiddish makes perfect sense. Odets grew up in a Yiddish-speaking milieu. The syntax of the English is Yiddish. But when Odets submitted it to Lee Strasberg and Harold Clurman, they wouldn’t put it up until it was sanitized, meaning all the Yiddishisms were removed. That’s another good reason to do it in Yiddish now.”

Sandler said he believes that every play is richer when performed in Yiddish.

“Yiddish is colorful, juicy, projective,” he said. “Yiddish had a great oral tradition before one word was written. Yiddish is natural for the stage.”

According to both Asheri and Sandler the play is flat, nuance and humor-free in Hebrew, whereas in Yiddish it expresses levels of irony and lends itself to multiple interpretations. The play itself — with its scenes of arguments and confrontations — has special resonance for Sandler who feels the absence of that kind of political theater today in America is a major loss. “Here everyone wants to agree and solve a problem, not address it,” said Sandler. “Serious issues are swept under the rug and that’s what happens on stage too, assuming issues are discussed at all. In Israel the people are very much like the characters in Odets, straightforward, discussing problems from all angles like rabbis debating a religious point.”

Despite the actors’ comfort level with the material, they faced a few cultural stumbling blocks, not least the setting for Moe and Hennie’s extra-marital affair. The idea of someone moving in with a family and then destroying it would be unlikely in a country as small as Israel with its self-contained communities. Word would spread quickly throughout the neighborhood and condemnation would be swift. Likewise, Moe’s gambler persona — his conspicuous display of money — would be foreign to an Israeli audience and perhaps challenging for an Israeli actor to portray.

“That kind of behavior is just seen as rude in Israel,” said Asheri. “There are rich people there, but they’re not especially admired or appreciated. If they’re successful in business it’s assumed they’ve done something wrong.”

Israel was a country made up of poor people who had socialist roots, says Sandler, noting that despite Moe’s disconnect with Israeli sensibilities he would nonetheless be given some latitude as a war veteran.

Mandelbaum doesn’t believe the two actors face any insurmountable acting challenges though their particular Yiddish dialect, the standard stage Yiddish, is at odds with the dialects spoken by the other actors, many of whom are Hasidic exiles right out of Boro Park.

“At Yiddishpiel, we spend a lot of time on dialects,” said Asheri. “But then when we’re not rehearsing the play we speak in Hebrew. Here we speak in Yiddish all the time and I love that.” “Look, I’m just thrilled that such terrific actors are working with us,” Mandelbaum interrupted. “It’s also wonderful to work with Israeli actors who are embracing Yiddish. I would love to see all the Yiddish theaters join forces in New York to create an international Yiddish-language repertory theater company that would tour all over.”

The Sandlers say they would love to come on board if such a theater existed, insisting that fame and fortune is not part of their fantasy life. They are great fans of American actors but troubled by some of their values, not to mention mainstream theater’s high production/high ticket cost for shows that are designed to intellectually entertain affluent theatergoers says Sandler who believes theater should be speaking to the heart of less well-heeled, sophisticated audiences.

He cites Lost and Found, a New York based Russian-Jewish immigrant theater group, as an example of what can be done in terms of reaching out to broader audiences at low cost. He stresses he will not reinvent himself to make it in American theater. Instead he will work with like-minded artists to reinvent American theater.

Making theater in America will require some adjustment. For starters, in Israel theaters are publicly underwritten, which allows for a more leisurely rehearsal pace. Two months of rehearsal are not unusual, whereas in New York actors may get a month of rehearsal that needs to be squeezed in between their day job obligations.

“In Israel actors are actors full-time and they’re paid for it,” said Sandler. “It’s their job and at the end of the day they go home to their families. They’re altogether more relaxed. New York actors are intense, focused, disciplined and the stakes are very high with every play they’re in.

“And I don’t think the acting here is as good as it is in Israel, at least not in dramas,” he continued. “Of course, in Israel, they’re acting in repertory, play after play. It’s not surprising the acting is very good. Also, the actors get to know each other, they become a family. When actors do a love scene, it’s not, ‘who is this person?’”

Still, whatever shortcomings exist in American theater — and by extension American culture — Sandler and Asheri say they’ve never felt more at home anywhere; in large part because it’s a country of immigrants and their descendents, with newcomers arriving all the time.

“You can have a conversation with anybody and in few minutes you realize there’s a play there,” said Sandler. “There is no place like America for great theater. The potential is enormous.”