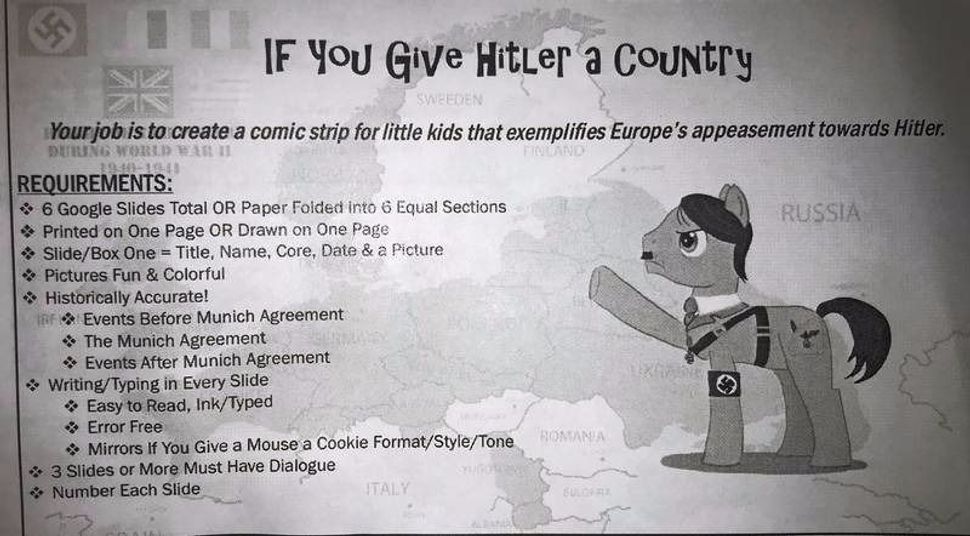 An image of the assignment, modeled on the children’s book “If You Give A Mouse A Cookie.” Image by YouTube

A Hitler version of “My Little Pony.” Spongebob Squarepants with swastikas.

Parents of middle schoolers in a Chicago suburb were horrified to find these images in their students’ language arts folders after a teacher gave them a controversial, Hitler-themed assignment, the New York Post reported. Modeled on the celebrated children’s book “If You Give A Mouse A Cookie,” the tweens were expected to create “a comic strip for kids that exemplifies Europe’s appeasement of Hitler.”

The students were encouraged to use “Pictures fun and colorful” and accurate information about the Munich agreement of 1938.

“I asked him, ‘Did you ask the teacher if you could use these images?’ and he said, ‘Yes,’” one concerned mom, Kelly Masterton, told a local news station. “Not sure what’s an appropriate manner to use a swastika.”

“I don’t think she did it on purpose, to be anti-Semitic,” Masterton added. “I think she was trying to teach that there was propaganda … It did not come through the assignment that way.”

The school district apologized to parents in a letter, saying the “‘cartoonish’ elements of the activity… did not fully represent the intent of the teachers.”