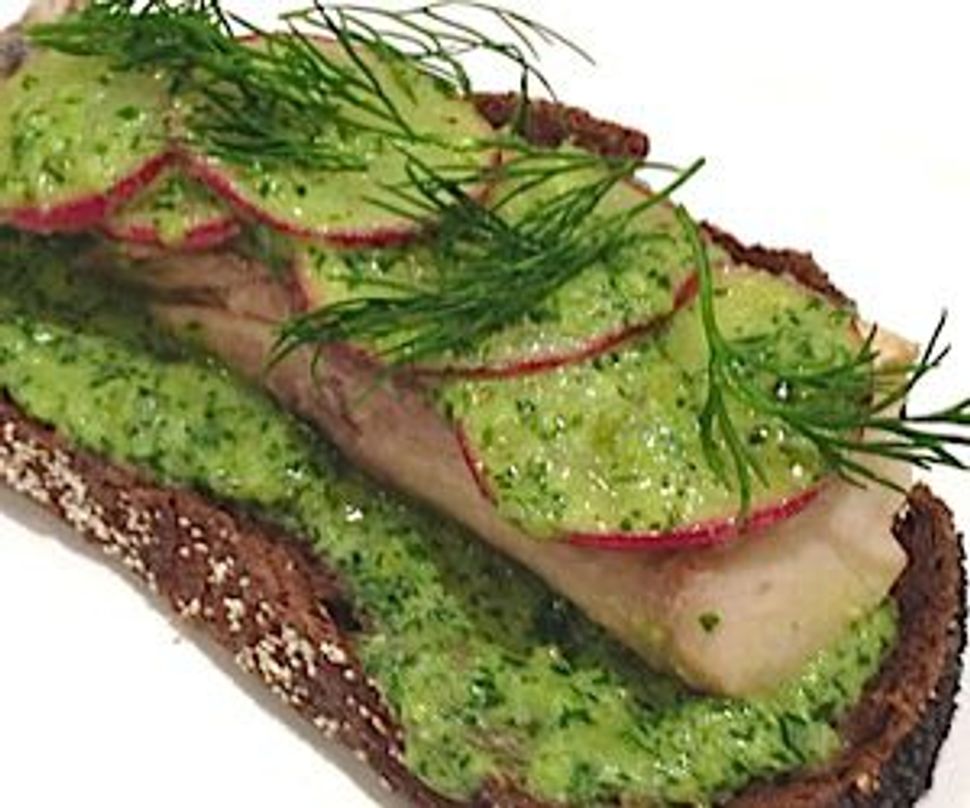 When I arrived last week at 2nd Avenue deli in midtown Manhattan for lunch with Nick Wiseman and Barry Koslow — the owner and chef of soon-to-open upscale DGS Delicatessen in D.C. respectively — I found my dining companions already elbow-deep in an impressive spread of traditional deli stand-bys.

Among the half-eaten offerings, I spied the remains of a corned beef sandwich, a hearty plate of kasha varnishkas, crisp gribnes, a knish the size of a softball, kreplach with fried onions, sweet noodle kugel, fatty cholent, pickles, cole slaw, and countless cans of Dr. Brown’s sodas in at least four flavors.

Wiseman and Koslow were in the homestretch of a whirlwind New York deli research trip, their second in the last few months. Also in tow: Wiseman’s cousin and DGS co-owner, Dave Wiseman, and the eatery-to-be’s newly hired general manager, Brian Zipin. Together the foursome had noshed their way through a marquee-worthy spate of New York deli institutions, old and new. On this trip, they’d already visited the much touted Montreal-style eatery Mile End, new-ish smoked fish emporium Shelsky’s, Borsht Belt-inspired Kutsher’s and Lower East Side landmarks Kossar’s Bialys and The Pickle Guys.

If they were fatigued, it was hard to tell. They should have been — Koslow confided they’d been eating for 10 hours straight. Nick Wiseman joked that they’d spent more than $1,000 in delicatessen — and that estimate didn’t seem too far fetched a possibility.

On their previous trip, the gaggle had hit up even more hallowed ground: Katz’s, Russ and Daughters, Yona Shimmel’s. No stone was left unturned — even the pickle bar at the Whole Foods on the Bowery.

All this eating was not without merit, they assured me. They’d taken careful mental notes about this dish and that, taking stock of everything from brines to cutlery. In some form or another, all they’ve learned will go into DGS, which aims for a late September opening.

D.C. isn’t exactly known for its deli. The city’s historic Jewish population has escaped to the suburbs in recent decades, taking with it many Jewish-owned restaurants and establishments. DGS hopes to harken back to an earlier time — it takes its name from District Grocery Society Stores, a cooperative grocery formed in 1922 run by mostly Jewish families. At its peak, there were 300 such stores in the D.C. area.

In recent years, new delis have been few and far between. One exception: Sixth & Rye, the deli-peddling food truck opened last year by historic synagogue turned Jewish center Sixth & I. It opened to great fanfare; Top Chef star and local restaurateur Spike Mendelsohn had developed the menu, and lines its first week were predictably long. The public’s deli fervor seemed palpable. But Sixth & Rye operated on a Friday-lunch-only schedule, and reviews have been lukewarm at best. For the most part, ask a Washingtonian where to find good deli, and he’ll still point you toward Baltimore, or worse, New York.

Koslow is eager to step up to the plate, acknowledging the direness of the D.C. deli scene. “Everyone is really excited about food in D.C. right now,” Koslow told me. “We’re filling a void. We’re getting in early on a trend.”

Indeed, D.C. is currently at a culinary crossroads of sorts. The last decade has seen its remarkable transformation from a staunchly meat-and-potatoes town to one with a vibrant and nuanced scene open to different types of cuisine. The time is right, Wiseman and Koslow believe, for deli.

But traditional deli isn’t Wiseman and Koslow’s aim. They’re banking on the popularity of chic-ified eateries like New York’s Kutsher’s and Mile End, which serve cocktails alongside smoked meat sandwiches. The trend has extended beyond New York, to San Francisco and Toronto, even London.

Koslow, a classically-trained chef with experience in some of D.C.’s top fine dining establishments, says he wants to offer a modern twist on deli while at the same time bringing the cuisine back to its roots.

“Deli had a height, then it crashed,” Koslow lamented. “They started out to be specialized and they grew into diners with overstuffed sandwiches and all-day breakfasts. They lost their soul.”

DGS plans to offer the expected corned beef and pastrami sandwiches, but executed with artisanal flair. Other items include classed-up smoked fish platters, house-made pickles, craft beer and cocktails, and a slew of dishes with global accents.