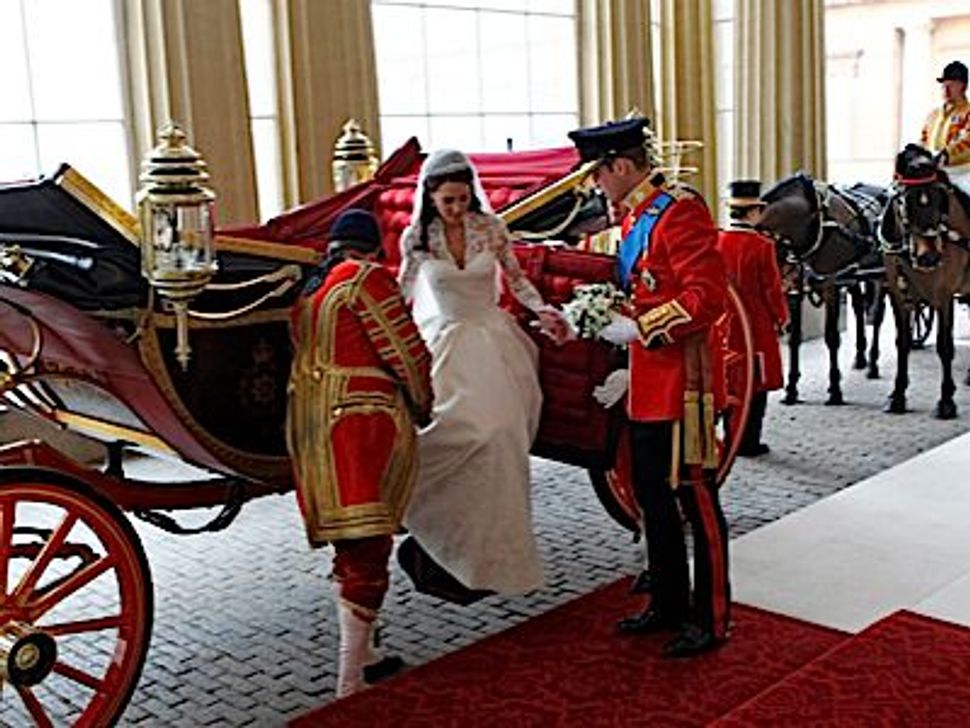 Prince William, Duke of Cambridge, helps Catherine, Duchess of Cambridge, out of a carriage ? upon their arrival at Buckingham Palace. Image by Getty Images

I have to admit, I can see the temptation. Watching Kate Middleton go from regular person to princess, perfectly gorgeous as she is fawned over by the entire world, I understand girlhood fantasies. When the prince said, in his vows, “and all my belongings,” I could not control that involuntary pang of jealousy. To have access to that kind of wealth and power means to be able to truly change the world. Whatever Princess Kate wants to do, she can. The world is at her disposal. All her dreams…

Well, unless she dreams about having a bit of privacy. Cameras at her every blink. Tabloids measuring the size of her waist — talk about body commentary. I even saw one article discussing whether she should have been wearing nipple pads (!). Sure, now she can do anything, but within certain rules. Every word out of her mouth will be scrutinized and analyzed. Every gesture, every expression blogged to death. Not to mention big decisions. Imagine trying to start a family, or having a regular job. She is no longer just Kate, and she never will be again.

So I ask myself, would I do it? If I had an option of gaining access to enormous power, wealth and status in exchange for relinquishing a private life, would I do it? Loving gazes from the prince aside, I’m sure she had this discussion in her own mind as well. Marry the prince and become a princess, with all that it comes with, or live a normal life. I don’t think it’s as simple a decision as it seems.

Some people believe that all marriage is about this on some level. Women seek out the comfort, care and security of a man in exchange for the abdication of certain freedoms. I would like to say that this is just an ancient paradigm, but I really don’t think it is. There are many women who stay in less-than-perfect marriages because they are afraid of the financial insecurity that comes with single motherhood. And with good reason: a disproportionate number of families living in poverty are single-parent families, the vast majority of which are run by women. This is the feminization of poverty. Women alone struggle financially more than men. Hence, the Prince William fantasy.

I think about the princess fantasy and its role in the creation of the Jewish wife. Images of the strong, prince-like husband merge with idyllic visions of the loving family with zillions of children, a smiling and pious mother who does not mind cooking and cleaning, and davening in between, and a man who spends his time going to shul, learning, and of course providing. This is the kind of blended and confused imagery that I was brought up with. I remember 12th grade, sitting around with the girls in my class, talking about weddings and husbands and clothes. One girl used to write up her guest list. Another said she would never marry a man who did not go to shul three times a day. These are just the fleeting memories that come to mind now, the formation of fantasies in a world in which the princess and the balabuste coexist.

I don’t really know what this all means. That all marriage is some kind of compromise. That we, as women, carry around a cultural heritage, whether we admit it or not, that love is great, but financial security is nice, too. That some days we all wish that we had a Prince William to save us from our regular lives. Probably bits of all of that.

Or maybe it doesn’t really mean anything. Maybe the whole Kate and William is just an excuse for a little escape from real life. So, mazel tov! Cheers to the happy couple. Now back to Shabbat cooking.