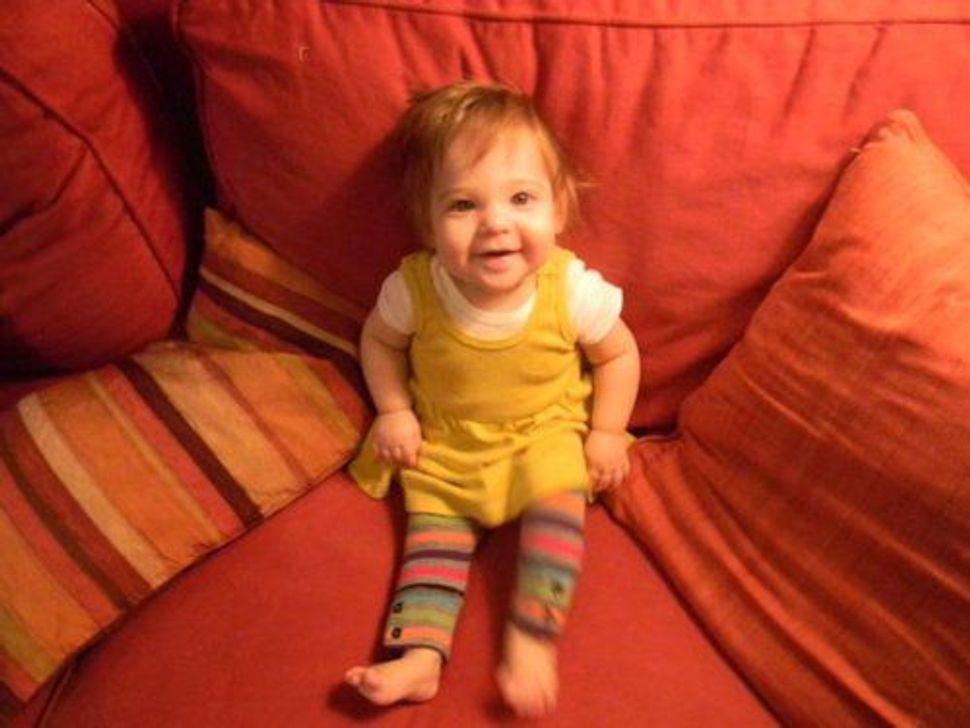 “With unstoppable tears and broken hearts we regret to announce that last night around 5AM, after hours of fighting and holding on, our precious Ayelet – the heart of our world, the light and strength for so many, could not fight any more.”

With those words, Seth and Hindy Poupko Galena shared the news of the January 31 death of their 2-year-old daughter, Ayelet Yakira. The little girl, suffering from a rare bone marrow disease, had received a transplant 154 days earlier.

Many of the thousands of those mourning Ayelet today knew her only through the Tumblr blog where her parents chronicled, with remarkable compassion, eloquence and humor, the toddler’s courageous fight.

It is, perhaps, no surprise that were able to laugh through their tears; Ayelet’s dad runs the popular “kosher comedy” website Bang It Out.

The Galenas’ posts were accompanied, most days, by a photo of Ayelet. Early photos showed the little girl, dressed in frilly frocks, bouncing in an ExerSaucer and pulling at the pages of her pop-up book. But as the months passed, and Ayelet’s condition grew worse, the images provided an unflinching look at the little girl’s reality: There were myriad tubes and machines connected to Ayelet’s swollen body and bald head (which was always lovingly covered with a floral hat or headband).

Her Modern Orthodox parents wrote about Shabbats celebrated at their daughter’s bedside, at Cincinnati’s Children’s Hospital, and about reciting the post-bathroom Asher Yatzar blessing, so that Ayelet’s kidneys might again begin working. (“We need a big night of peeing and prayer,” they wrote on January 30.) Their Tumblr journal, which I’d love to see adapted into a book, has a thing or two to teach all of us about facing life’s greatest challenges with courage and grace and laughter.

There is another lesson to be gleaned from the Galenas’ story, or specifically, from the communal response to it — as gauged by the comments on Tumblr and Facebook, where Ayelet had more than 5,200 fans. In our darkest hours, there’s a natural inclination to retreat inward. But this family shows us how powerful doing the opposite can be. In sharing their private pain, they fostered an extended support network that has, in turn, helped sustain them.

“Your likes, your prayers, your comments, your emails, your texts, your challahs. All these, every single one is read/felt/tasted by us,” they wrote on January 24, a week before Ayelet’s death. “We read everything, and they are the single reason we are still standing.“

May they continue to find strength in the community they inspired.