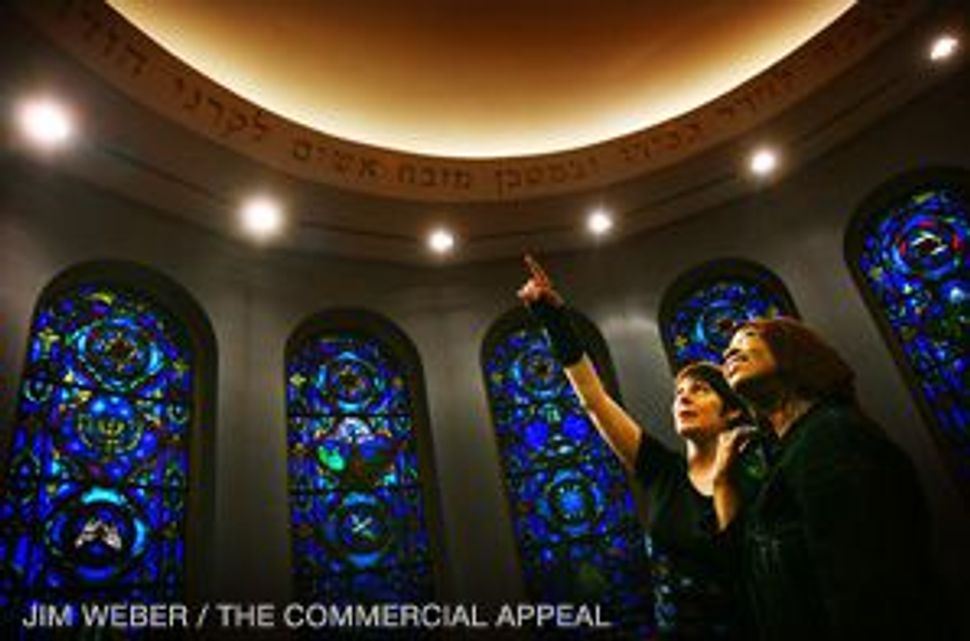 SEEING THE LIGHT: Dvorah Bat-Zion (left) explains a biblical inscription inside Beth Shalom Synagogue in Memphis to Yedideia Israel (right), one of a group of 55 Africal Americans from Nairo, Ill., who converted to Judaism earlier this month

A rural community described as “far away from everywhere,” Cairo, Ill., boasts 40 churches, 40 blocks and fewer than 4,000 people — and as of earlier this month, it also has 55 brand-new Jews. 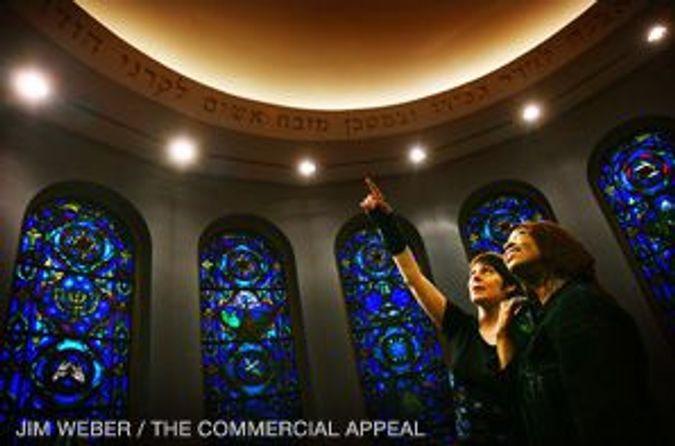 SEEING THE LIGHT: Dvorah Bat-Zion (left) explains a biblical inscription inside Beth Shalom Synagogue in Memphis to Yedideia Israel (right), one of a group of 55 Africal Americans from Nairo, Ill., who converted to Judaism earlier this month 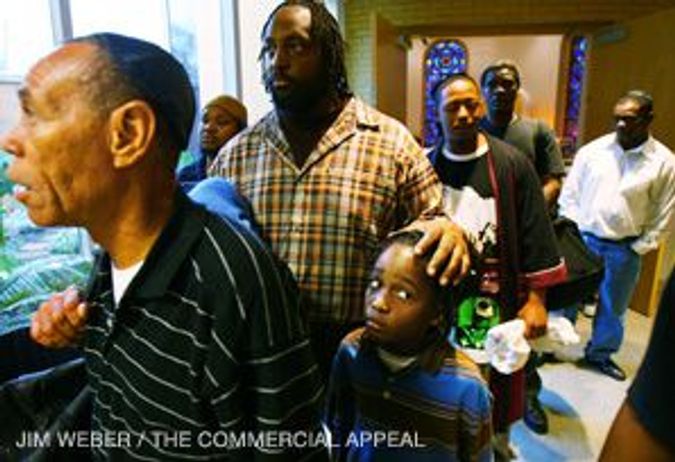 PLUGGING IN: Some of the Cairo, Ill., residents who decided to convert to Judaism wait to enter the mikveh, the final step in their lengthy conversion process

Dozens of Cairo’s residents — all African American and ranging from toddler to senior citizen — visited a mikveh in Memphis, Tenn., on December 9 and took the plunge into conversion. It was the culmination of an 18-month spiritual journey that has brought a number of Reform and Conservative Jews into common cause with a group of spiritual seekers from a town that is predominantly black and poor.

“It was incredible. Who would have thought that rabbis in St. Louis and Memphis would increase the number of Jews of color in America appreciably?” said Rabbi Micah Greenstein, who attended the conversion ceremonies and serves as the spiritual leader of Temple Israel, a Reform congregation in Memphis. “Judaism saved my life,” one of the converts told Greenstein. “That’s the first time in 100 converts that I’ve ever heard that,” the rabbi said.

The conversion odyssey, which was first reported on by Memphis’s Commercial Appeal newspaper, began in Cairo roughly four or five years ago, when a now 39-year-old computer repairman named Phillip Matthews grew disaffected with the Baptist faith in which he was raised and became interested in Judaism. Described as having a magnetic personality by several rabbis involved in the Cairo conversions, Matthews quickly found himself at the center of a study circle that involved an extended network of friends and family — including, by his estimation, 17 or 18 relatives, among them his mother, siblings, nieces and nephews — who ultimately converted to Judaism along with him.

“[Judaism is the] oldest and most reliable religion on the planet,” Matthews said in an interview with the Forward, explaining his initial interest. “We were the type of people, we didn’t just want to read what was in the book; we wanted to live out what we were reading.”

By sometime in 2006, Matthews had begun “teaching Torah study” and decided, along with more than 30 others, that he wanted to study toward conversion, according to Rabbi Lynn Goldstein, a Reform rabbi in St. Louis who mentored the Cairo group extensively.

“I got a phone call from Phillip, and he basically said, ‘I’d like to study to convert to Judaism,’” Goldstein recalled. “[They] came to this as a group, as a whole group of people who had been meeting for many years, studying the Torah, and observing the Sabbath.”

Although Cairo is roughly 170 miles south of St. Louis — a trip that takes two-and-a-half to three hours by car — Goldstein was the closest rabbi who volunteered to work with Matthews’s group. And so, the Cairo cohort began a series of arduous weekly journeys to study with her up in St. Louis, where the group members sat on folding chairs filling nearly every available space in her living room. At first, the caravan of adults and children made weekly treks up to St. Louis to study with Goldstein for two to three hours Wednesday evenings. Later, the group switched to meeting every other Sunday, all day.

“By the grace of the father in heaven, we had no accidents going up and down the highway for 18 months,” Matthews said of the long journeys.

Ordained at New York’s Hebrew Union College-Jewish Institute of Religion in 1987, Goldstein took the group on a number of field trips as part of the training, including to a kosher butcher and the St. Louis Holocaust museum. During her living room teaching sessions, young and old studied together, with her two young daughters leading separate educational games in the basement for the younger children. In total, the cohort of 55 converts included 11 children under the age of 13.

In Goldstein’s view, a turning point for the group came last April, when congregants at the synagogue where she maintains a part-time pulpit, Reform Congregation Beth Jacob in Carbondale, Ill., welcomed the members at a community service and the Cairo folks surprised everyone with a gospel-style arrangement of the Shema prayer.

“[Phillip said,] ‘You’re going to have to trust me,’ and then they started bringing in a keyboard and all sorts of stuff,” Goldstein recalled. “Everybody had their arms on each other and was swaying.”

Both Goldstein and Matthews said that members of the Cairo group felt genuinely embraced by members of the Carbondale congregation, many of whom are professors and professionals who work at Southern Illinois University Carbondale.

It was the mikveh ceremony itself that became the group’s final hurdle. While Goldstein recruited a number of Reform and Conservative rabbis in St. Louis to serve on the three-member batei din, or religious courts, needed to approve the candidates as ready for conversion, she was not able to arrange for the group to use St. Louis’s community mikveh, for reasons she declined to explain. Ultimately, the conversions were held at the Conservative Beth Sholom Synagogue in Memphis.

In Matthews’s view, rising to meet challenges is part of the essential message of Judaism.

“When you read the Bible, when you read the Old Testament, and you see all the things that the ancestors of old endured, you see what it is to have endured,” Matthews said.

Mordecai Miller, a Conservative St. Louis rabbi who helped authorize a number of the conversations, said he was impressed by the converts’ sincerity. “Did they have a halachic consciousness?” he asked. “The truth is that they do. And sadly, there are many Jews who do not have that sense of being commanded.”

On the weekends when there are no services or when the group can’t make the hour trek to Carbondale, Matthews said everyone observes the Sabbath together in Cairo. And as time goes on, he is hopeful that more members of his community will turn toward Judaism.

“Our job as a newly converted Jew is to show the people that there is a better way of life,” Matthews said. “Right now, we’re just taking a simple message to our people: If you’re seeking, what you’re seeking for you’ll find, and if you’re looking for truth, I believe in my heart that Judaism is a better option.”

If, at times, Matthews’s spiritual rhetoric still seems somewhat borrowed from Christianity, Goldstein argues that it is all part of the journey.

“Doesn’t everyone who comes to Judaism have their own understanding of what it is?” she said.