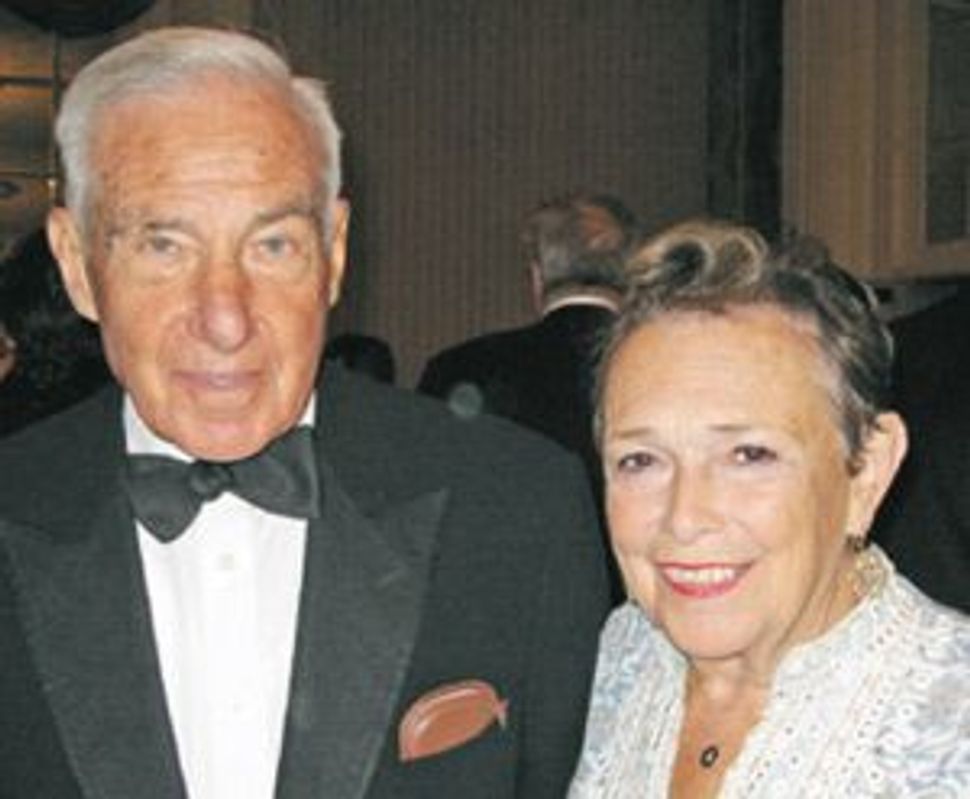 The September 28 ELEM/Youth in Distress benefit, held at the Harvard Club and honoring organization founder and chair Ann Bialkin, was an evening of music and magic. NBC’s chief legal analyst, Dan Abrams, hosted.

Greetings by ELEM/Israel’s president, Nava Barak, and a video of 18-year-old ELEM alumna Diana Golbi, 2010 winner of “Kokhav Nolad,” Israel’s version of “American Idol,” set the stage for supernatural entertainment” by mentalist Lior Suchard, who entertains audiences with his “psychic” abilities. His 45-minute mind-reading wizardry dazzled the crowd. Also honored was Oren Heiman, managing partner of Shiboleth, LLP, the largest Israeli-based law firm in the United States. Lenore Ruben, president of ELEM/America, made the presentations to Bialkin and Heiman. 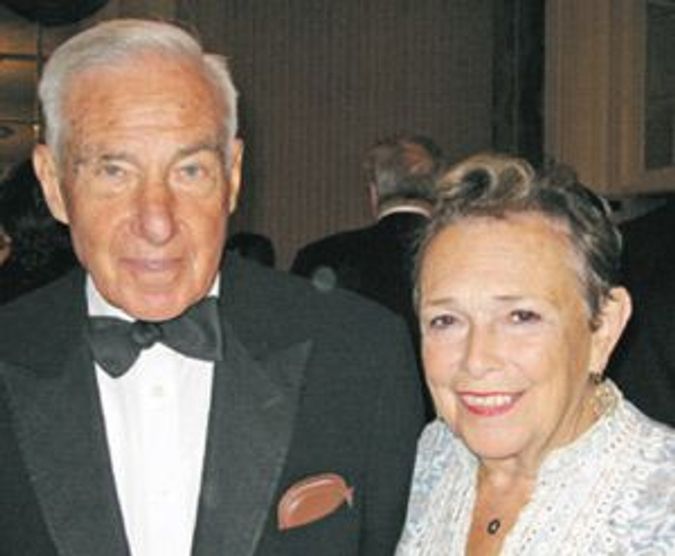 “Wow! Can you believe that ELEM has been in existence for 28 years?!” Bialkin exclaimed. Citing the statistics that impelled her to found ELEM in 1981 and its Israeli counterpart, ELEM/Israel, in 1982, she noted that back then, “25,000 Israeli youth neither worked nor went to school; over 10,000 — 10% of 14- to 18-years-olds — went through juvenile court each year: homeless runaway youth, Russians, Ethiopians, prostitutes, sex offenders, family violence, dysfunction, alcohol, drugs. At first there was denial. But little by little, people acknowledged the problems. We now have 2,000 volunteers, over 200 well-trained professionals. We run community-based hostels, offer literacy programs.”

In the video, Golbi — a former ELEM rescuee and now a role model to current street children — is mobbed, hugged and embraced by adoring friends at concerts, as well as by former ELEM pals. When she was 4, her family made aliyah to Israel from the former Soviet Union. She had difficulty adapting to a new language and culture. After her parents divorced and she was taunted for being Russian, she became one of Israel’s “street children,” until a social worker saw her playing the guitar and singing. The social worker realized that Golbi needed someone who believed in her and who would push her. Originally rejected by the producers of “*Kokhav Nolad, *” 2008, she is now a national celebrity who uses her fame to help others find their way.

In his tribute to his wife, Kenneth Bialkin recalled their first visit to Israel in 1959, “where we knew no one and had no relatives…. We saw that the Jews of Israel then, as now, were the first line of defense for the Jewish people… that their fight was our fight.” Touting ELEM as a “model of American-Israeli partnership,” Bialkin concluded: “After 28 years [now that Elem will be moving to its own offices], the Bialkin dining room has been liberated from its service as ELEM headquarters… .I will miss those days of coming home and never knowing who or how many ELEM stalwarts would be deep in discussion, planning… eating and drinking.”

The evening concluded with a performance by award-winning cabaret singer Sheera Ben-David and the Manhattan-based ensemble Metro, comprising Avigail Malachi, Alex Forbes, David Segal and Elad Kabilio — highly gifted young musicians from around the world who attend Mannes College at the New School for Music, in New York.

“ I should have said I’m kvelling,” Matilda Cuomo told me at the National Osteoporosis Foundation’s September 30 A Gift From Mothers to Daughters Lunch, held at The Pierre, at which she received NOF’s Generation Award.

She was referring to the congratulatory letter from her son, New York attorney general Andrew Cuomo, who is currently running for governor and could not attend. His letter was read by event chair Sharon Marantz Walsh, who disclosed that Matilda Cuomo “and her husband of 56 years, former New York governor Mario Cuomo, have five children, 13 granddaughters and one grandson.” Matilda Cuomo credited Dr. Ethel Siris, director of the Toni Stabile Osteoporosis Center at Columbia University and a past NOF president, for “keeping me healthy.” CBS medical journalist DR.Max Gomez, recipient of the NOF Generation Award, cited his mother, “who shrunk” because of her osteoporosis, and his grandmother, “who became disabled by osteoporosis.” He defined osteoporosis as “a pediatric disease with geriatric consequences.”

“Osteoporosis does not discriminate — no matter your gender, race or ethnicity,” NOF chairman Daniel Mica said. “According to the Center for Disease Control, falls are the leading cause of injury and death among individuals over 65 years of age…. You may be interested to know that President John F. Kennedy had osteoporosis. So did Mother Teresa, and after breaking his shoulder, femur and having a hip replacement, it is suspected that Pope John Paul II also suffered from that disease.”

Adding glitz to the event, the 200 guests had a chance to buy jewelry and cosmetics from such on-site boutiques as Bulgari, Judith Ripka and Adrienne Landau, with 20% of the sale donated to NOF programs. Among the NOF boosters were Barbara Tober, Somers Farkas, and mother-daughter team Ethel and Francine LeFrak.

The last time I chatted with jazz pianist and composer Dave Brubeck was at the 2005 New York Jewish Music & Heritage Festival, held at Frederick P. Rose Hall, Home of Jazz at Lincoln Center. His powerful opus “The Commandments” was premiered at the festival. I looked forward to seeing him again at the September 28 “Take Five” Gala, at Richards of Greenwich, in Greenwich, Conn. — a chic men’s and women’s department store — to benefit the Russian National Orchestra. Unable to attend, his younger son, Chris Brubeck, accepted the RNO’s Silver Baton award in his name. He joshed, “When people ask me how my father is, I say he’s like a Rolls Royce with 475,000 miles on him.”

Co-chaired by NRO boosters Marianne Wyman, Irene Ioffe, Anne Perlin and Tatiana Panchenkova, the event was oversold and some of the guests ended up sitting on the store’s grand staircase. Wyman told of how “the evening came to be.” The NRO wind quartet could not afford to buy tuxedos. One of the dedicated music lovers went to Jack Mitchell, head of the family that owns Richards, and offered to buy the tuxedos.

The music lover casually mentioned that he was planning a Russian evening at the store. “When I heard about the conversation, I dove in — which led to tonight.” A young married couple, born-in-Russia but now living in the U.S. — Anastasia and Gene Shapiro —commented that the Russians’ concept of the West was formed through jazz. “It’s a perfect blend of the Russian soul — classical and jazz.” The Brubeck Brothers Quartet, comprising Chris and Dan Brubeck, Chuck Lamb and Mike deMicco, performed two of Brubeck’s most famous works: “Blue Rondo a la Turk” and “Take Five.”

The Russian National Orchestra, launched in 1990 as “a courageous demonstration of artistic freedom during the Soviet Regime,” was the first Russian orchestra to perform at the Vatican and in Israel. In 2004, it became the first Russian orchestra to win a Grammy. The orchestra received the award for its recording of Tchaikovsky’s “Peter and the Wolf” with Sophia Loren, Bill Clinton and Mikhail Gorbachev narrating. The Dave Brubeck Quartet’s first concerts in Moscow were in 1987. It was noted that “they” — the Russians — knew Brubeck’s music from the Voice of America broadcasts and that Brubeck’s appearance was seen as a symbol of Gorbachev’s new policy. Postconcert, the guests enjoyed a movable culinary feast at several local restaurants, including the aptly named Moscow on the Hudson.