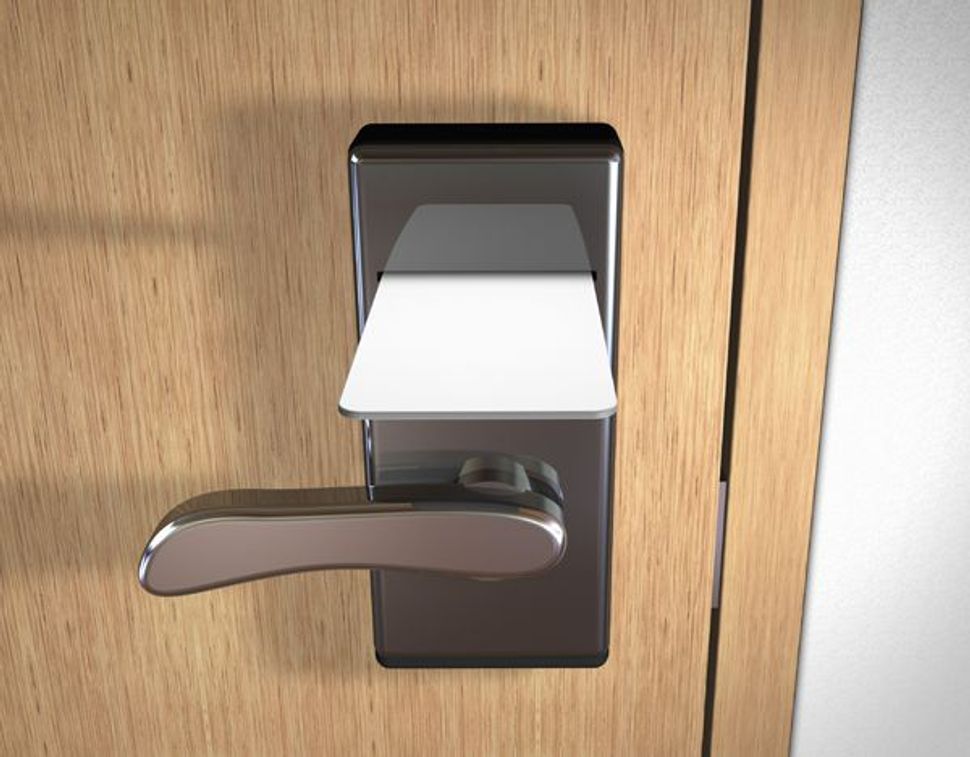 For the gadget-toting Jew, a recent announcement from the Conservative movement about new Sabbath guidelines on the ban on electronics might sound like a flight attendant’s canned directive before takeoff: no cell phones, smart phones, digital cameras or even e-readers.

But beyond the traditional halachic reasons for pressing the “off button” on the Sabbath — the Torah’s ban on “work” reinterpreted for modern times — the guidelines contain an insight that speaks to the spiritual health of our society: The very gadgets meant to make our lives easier are now shackling us to our work and isolating us from the people around us. And Judaism’s oldest mandate — the Sabbath — might be the key to untethering ourselves.

“Using electricity makes us powerful,” wrote Rabbi Daniel Nevins in the guidelines, which were approved by a committee of the Conservative Movement’s Rabbinical Assembly in May. But Nevins, who is dean of the Rabbinical School of the Jewish Theological Seminary of America in New York, cautioned: “Our digital servants have the tendency to become tyrants, and it is nearly impossible to escape their reach. Instant access leads to the loss of privacy and the erosion of social intimacy.”

The fear that gadgets are taking over our lives or becoming an extension of our bodies is not new. But right now, a broader anxiety seems to be rippling through the Jewish community’s disparate, divided domains.

Less than two weeks after the Conservative movement released its Sabbath guidelines, Hasidic pop star Lipa Schmeltzer — who inhabits a far different Jewish world — posted a YouTube video infused with a similar perception of gadgets taking over even in his insular subculture. The video features Schmeltzer and a dancing chorus line of companions dressed up as silver robots, looking like the Tin Man from the classic 1939 film, “The Wizard of Oz.”

The film is based on a highly allegorical novel by Frank Baum, a disillusioned prairie populist, in which this character, who lacked a heart, symbolized modern urban industrial man. Once healthy and productive, he is now reduced to an unfeeling and dehumanized worker. In Schmeltzer’s video, his Tin Man character sees Hasidim and their children in the Boro Park section of Brooklyn flocking to electronics stores, obsessed with gadgets and games, oblivious to their human relationships. He and his fellow robots admonish viewers to “hang up the phone.”

In May, tens of thousands of ultra-Orthodox men packed Citi Field stadium in Queens for a rally against the moral dangers of the Internet. The protest, which was advertised on the Internet itself, inspired countless punch lines. But it also contained nuggets of universal wisdom: “Even secular studies agree that children are being turned into ‘click vegetables,’” said one speaker, Rabbi Ephraim Wachsman, according to an article in The Verge. “Bored? Click something else.”

Ultra-Orthodox Jews aren’t the only ones who have an ax to grind with technology. In March, the secular Jewish not-for-profit Reboot sponsored the third annual National Day of Unplugging, asking Jews and non-Jews alike to power down their gadgets in the spirit of the Sabbath. The Union for Reform Judaism endorsed the initiative on its Twitter page, saying that it was time to “turn off our tech and refresh ourselves.” “Everyone is thinking about this because everyone is feeling so overwhelmed by it and somewhat offended by others peoples’ use,” Reboot spokeswoman Tanya Schevitz said.

Also in March, several congregants at the Modern Orthodox Mount Sinai Jewish Center in Manhattan’s Washington Heights spoofed the iPhone’s Siri function, a voice activated “personal assistant,” in a video for the synagogue’s Purim shpiel. In the clip, Siri, or Suri, as she’s called in this case, acts as an electronic scold, forcing her users to make more frum decisions. “Make a reservation for me at Second Avenue Deli,” one man asks. She refuses: “That restaurant does not have an acceptable hekhsher.”

“People are feeling a little bit spooked out by their technology,” Nevins said. “There is this sense that the boundary between machine and person is blurring. This is very empowering, but it is also invasive. I think Shabbat should feel a little different.”

The results of several years of work, Nevins’s ruling is a technical examination of Halacha and technology. For many decades, rabbis banned electricity on the Sabbath because they thought it violated the Torah’s prohibition of fire. But in his teshuvah, or legal responsum, Nevins argues that new gadgets like iPhones and e-readers violate not the Torah’s ban on fire — no sparks are set off by turning them on — but its ban on writing and recording.

These electronics, Nevins said, are more complicated than their on/off switches. A cell phone records the time a call is placed and the length of the call; an Amazon Kindle allows its user to type notes into the text. And computers are constantly capturing user data. By utilizing our gadgets, we are “working” even when we don’t realize it. “For me it feels effortless and like nothing is happening,” Nevins said, “but a lot is happening under the hood.”

What’s more, these technologies violate the notion that the Sabbath should be both a time to rest and a time to keep it local. “Contemporary families spend much of their time together focused on individual electronic devices. Faces lit by glowing screens large and small, ears attached to headphones, they busily interact with friends and strangers across the world while making minimal contact with the people around them,” Nevins wrote. “Shabbat can and should be different.”

Though many Conservative Jews don’t observe the Sabbath, Nevins said that his teshuvah is more than a thought experiment, and that it will guide the policies of camps, schools, synagogues — and individuals — about electricity usage on the Sabbath.

David Booth, a conservative rabbi who helms Congregation Kol Emeth in the heart of California’s Silicon Valley, said that he plans to use the teshuvah in a workshop about Sabbath observance at his synagogue this fall. “This idea of untethering is a big deal in Silicon Valley,” he said. “There are addictive things about these technologies. To tell everybody once a week to go untether is greatly healing and freeing.”

Booth said that he sees the effects of tech addiction when he counsels married couples who are more focused on the Internet than on each other. In his personal religious practice, Booth’s family enters the Sabbath by unplugging the house’s wireless Internet network before lighting the Friday night candles.

Schmeltzer’s video also riffs on tech dependency. “The gadgets make us lazy, we gotta take it easy,” the break dancing robots sing. And at another point, “Instead of searching Google, I’m busy making kugel.”

“It’s not a secret that I myself am a sufferer of being crazy with the phone,” Schmeltzer told the Forward. When the iPhone was released in 2007, Schmeltzer was among the first to buy it, waiting on line outside an Apple Store in the Palisades Center mall in upstate New York. Today, he said, his hands are constantly cramping from texting too much. He plans to take up yoga for his hands to relieve the pain.

“Now we understand the beauty of Shabbas that we got thousands of years ago,” he said. “The truth is, we can make Shabbas in the middle of the week, for one hour a day.”

In fact, many Jews, both Orthodox and secular, seem to be taking mini-Sabbaths during the workweek to create distance between themselves and their gadgets. Mordechai Lightstone, director of social media at the Chabad news site Lubavitch.com, said that he blocks the Internet on his phone during his three daily prayers and that he puts away his phone altogether at family meals.

Schevitz said that she has a no-phone policy when she is in the car with her children. And Nevins silences his phone when he’s talking to another person or eating a meal.

“For our ancestors, Shabbat was the cessation of manual labor,” he said. “Today we are information workers, and so maybe our challenge and our opportunity is to shift the way we handle information on Shabbat.”