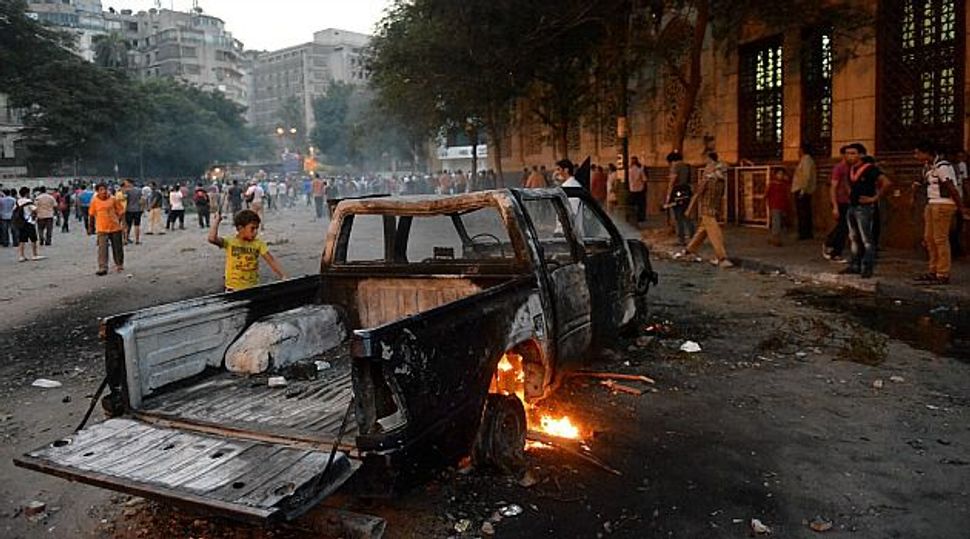 Just days before recent anti-American protests broke out around the U.S. embassy here, Prime Minister Hisham Qandil, the recently appointed head of Egypt’s new Islamist government, looked out at an audience of 100 American businesspeople, all comfortably ensconced in a well-appointed meeting room at Cairo’s four-star Conrad Hotel, and assured them of his government’s eagerness to welcome foreign investment.

The group — the largest American business delegation to visit Egypt since its 2011 revolution — included high-powered female executives and representatives of firms with important plants, research centers and other investments in Israel. 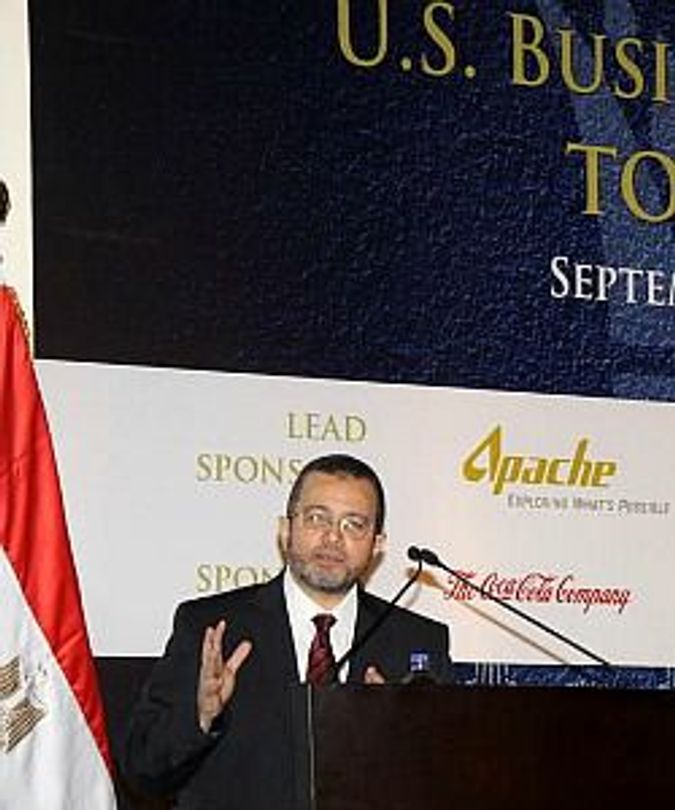 Nineteen months after the rebellion that sent shockwaves through the Middle East and the Egyptian economy cascading into crisis, Egypt’s government, dominated by the staunchly Islamist Muslim Brotherhood, is ardently wooing desperately needed international investment.

That courtship reached its apogee in early September with the visit of the U.S. business delegation, just before riots broke out in Egypt and elsewhere in the Middle East in reaction to a deliberately offensive anti-Muslim video screed that shadowy figures in America produced, dubbed into Arabic and uploaded to YouTube earlier in the month.

The sequence of events seemed to give ballast to critics who warned the business leaders they could be falling in prematurely with a government still hostile to Western interests, religious freedoms and Israel. Initially, Egyptian President Mohamed Morsi failed to speak out strongly against the unrest, which saw violent protesters battle Egyptian police and breach the embassy walls. But following a phone call from President Barack Obama warning him that his country’s strong ties with the United States were at stake, Morsi condemned the attack and ordered police to put down subsequent violent gatherings.

Still, no one could say where that left the business leaders who, just days before, sounded so hopeful that Egypt was emerging as a safe place in which to invest.

“We remain strongly committed to continuing to invest and grow our business here as well as investing in the Egyptian community,” said G. Steven Farris, chairman of the U.S.-Egypt Business Council and CEO of Apache Corp., the largest American investor in Egypt, at the business gathering.

Thomas Nides, America’s deputy secretary of state for management and resources, also voiced optimism. “Egypt is open for business,” he told the delegates, offering the official Washington view. Members of the delegation, sponsored by the U.S. Chamber of Commerce, represented 49 of America’s largest corporations, including Boeing, Citigroup, ExxonMobil and Microsoft.

The newfound confidence derived, ironically, from an unlikely source: Morsi, Egypt’s Muslim Brotherhood-backed president. Morsi, a longtime member of the Brotherhood who resigned from the group’s Freedom and Justice Party only on assuming office at the end of June, became Egypt’s first head of state to be elected in a competitive democratic election. Since his June 30 inauguration, he has consolidated his power with breathtaking speed. After militants in Sinai killed 16 Egyptian soldiers in August, Morsi wrested back executive prerogatives from the country’s military, which had ruled Egypt since longtime autocrat Hosni Mubarak was ousted as president in February 2011. He forced the retirement of the country’s two top generals and nullified a constitutional declaration issued by military leaders minutes after the close of voting in June that neutered the incoming president’s authority.

The clarified political landscape has, in fact, triggered a flurry of investment from abroad. Saudi Arabia and Qatar have pledged billions of dollars. China is expected to pour billions more into Egypt in loans and investments following Morsi’s visit to Beijing late in August. Meanwhile, Egypt is negotiating the terms of a $4.8 billion loan with the International Monetary Fund.

Now, the United States, Egypt’s largest single trade partner, is eager to get in on the act despite a Muslim Brotherhood-led government that it likely hoped to avoid. The Chamber of Commerce visit is just the latest evidence. America’s ambassador to Egypt, Anne Patterson, opened dialogue with the Brotherhood last December in the midst of parliamentary elections that the Freedom and Justice Party dominated. In July, Secretary of State Hillary Rodham Clinton held talks with Morsi during her visit to Egypt. The United States also welcomed a Brotherhood delegation to Washington in April as part of a much publicized charm offensive.

The Obama administration is currently negotiating with Egypt to eliminate about $1 billion of Egyptian debts. And Nides, the deputy secretary of state, announced during the Chamber of Commerce mission that the U.S. Overseas Investment Corporation will partner with the Egyptian investment group Abraaj Capital to invest $150 million in a fund aimed at boosting small and medium-sized Egyptian businesses.

Egypt is in urgent need of outside capital. The transitional period has seen its foreign currency reserves drop by more than half as foreign direct investment and tourism have nose-dived amid ongoing political turmoil.

Eric Trager, fellow at the Washington Institute for Near East Policy and a sharp critic of the Brotherhood, argues that U.S. encouragement of business development in Egypt without laying out clear expectations for the new Egyptian government is a mistake. “The administration’s general approach towards Egypt has been as if Egypt is a charity, not as if Egypt is a strategic partner from which we expect much in return,” he said.

According to Trager, Brotherhood leaders’ rhetoric on issues such as religious freedoms and relations with Israel should raise serious red flags. “When you ask them ‘Are you pro-business? Are you going to keep the qualifying industrial zones?’ — joint ventures with Israel that bring in roughly $2.3 billion a year — they say: ‘No, no, no. It’s more politically costly than economically beneficial.’”

But American government and business officials insist that a quick economic recovery is critical to political stability in Egypt and, by proxy, U.S. interests in the region. “A strong, successful Egypt is good for the region, good for America, good for the world,” Nides said.

Said Sadek, a professor of political sociology at The American University in Cairo, likened the Brotherood’s neoliberal policies to those of the former president Mubarak. He added that he could not envision the current government altering Egyptian foreign policy in a substantive way. Any changes, he said, will be purely cosmetic.

“[Morsi] wants to have a relationship with Israel, but instead of having the Israeli officials photographed coming to meet him, now Israeli officials visit, but without the camera,” Sadek said. Likewise, Sadek dismissed concerns that Brotherhood officials would resist doing business with Jewish or female executives, pointing to the Brotherhood leadership’s long-standing ties with a wide range of American business and financial institutions.

The Brotherhood, from which Morsi and many of his top advisers hail, has advocated a free-market and free-trade agenda that, while controversial in Egypt, has helped ease foreign investors’ concerns. Its leadership is populated by wealthy businessmen like chief strategist Khairat El-Shater, a millionaire who made his fortune in textile and furniture trading. Shater memorably told Bloomberg last year, “We believe in a very, very big role for the private sector.”

An agreement on the $4.8 billion IMF loan would go a long way toward further reassuring investors. In his Chamber of Commerce presentation, Qandil expressed confidence that the loan would be finalized within the next couple of months.

But in fact, discussions have been held up since last year over internal rifts within the Egyptian government. The loan faces stiff domestic opposition. In order to obtain it, the government would likely have to agree to deep cuts to popular subsidies on which many poor and working class Egyptians depend.

That indecision is just one reminder of the uncertainty that still pervades Egyptian politics. Despite Morsi’s recent actions, question marks abound. The precise relationship between the civilian and military leadership remains unclear, a constitution has yet to be drafted and the country is without a parliament after it was dissolved in June under court order. New elections are expected later this year.

Qandil acknowledged this reality when he remarked that while he considers Egypt’s “confusion period” to be over, the transition continues. But the promises of calm waters ahead are clearly still tentative, as demonstrated by the hundreds of outraged Egyptians who swarmed around the U.S. embassy just as the U.S. business leaders were departing.