Many formerly ultra-Orthodox and Modern Orthodox Jews who no longer hold the beliefs of their communities feel “pushed off the derech,” yet still retain their sense of Jewish identity, a groundbreaking new study of the group has revealed.

A third of those surveyed have yet to physically leave their communities, and may maintain outward displays of religious observance while having “left” the community in their beliefs and private lives. When they do leave, over half the respondents reported feeling disconnected to any Jewish community, and nearly a quarter have trouble with dating, holding relationships, or finding a job.

The report surveyed 885 people who once identified (or currently reside in) Chasidic, Chabad, Yeshivish, Modern Orthodox, or other Orthodox communities. Many of these individuals now identify as Off The Derech, or OTD, and go to OTD-specific social events, such as those organized by OTD Meetup, or are members of OTD social media groups.

Other important factors cited by respondents included the treatment of women within ultra-religious communities and the widespread perception of contradictions, double standards, and hypocrisy. Contrary to widely held assumptions about those who leave Orthodox Judaism, only 2% of respondents cited the influence of the Internet or weak secular education as significant spurs to leaving .

The report was released by Nishma Research, a marketing firm that specializes in Jewish demographics.

A huge majority — 95% of all respondents — still view themselves as Jewish. Two-thirds now identify as either “traditional,” culturally or humanist Jewish, or, simply, “just Jewish.” Only 21% identify now with a mainstream denomination such as Reform, Conservative, or Chasidic. The Pew Research Center’s “Portrait of American Jews,” by contrast, reported that 70% of American Jews identify with a mainstream denomination.

“It seems that those who started out most stringently to the right — Chasidic Jews, Yeshivists — after leaving the community, they retained less of their beliefs and practices than other groups,” he said.

Acceptance by the respondents’ families, Trencher said, also started out lower in the most religious groups.

“But it does grow over time. The understanding and acceptance of the families goes up to about half after ten years. That’s in pretty much every group, too.”

The study was a joint effort with Footsteps, an organization that helps facilitate the transition out of Modern and ultra-Orthodox communities for those wishing to leave. It may be difficult to leave Orthodox Judaism, or simply leave a specific community, if an individual does not know people outside the community, does not have the material means to leave, or does not have sufficient English skills to live on their own. Both Footsteps and Project Makom, an organization that serves Jews who want to remain observant but may wish to leave their current ultra-Orthodox community, distributed links to the survey to their members.

“The only surprising thing to us was how many people filled it out in a week and a half,” says Lani Santo, the executive director of Footsteps. “It’s great to have quantitative data on things that we as an organization have known qualitatively for some time.” 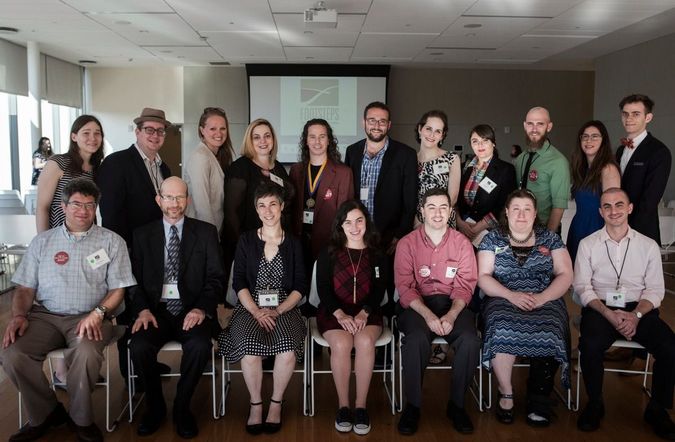 Honorees at this year’s Footsteps Celebrates, an event that recognizes major accomplishments of Footsteps members. Image by Footsteps

Santo says that her organization helps with introducing its members to new ways of living in a community.

“Many people are traumatized by even the concept of community,” she says. “What we’re saying is that you can have individual goals and hold them in tandem with collective goals.”

Those goals, as the report shows, often revolve around maintaining a Jewish identity on the individual’s own terms.

“Probably the top question I get asked is, ‘Why do people throw out the baby with the bathwater?’” she added. “And I say time and time again, that that is a myth about this community.”

The Nishma report was aimed at those who have a background in Orthodox Judaism, either because they were raised in Orthodox households or because they are a baal teshuvah, someone who chooses to become Orthodox. Not all of the respondents had fully left their communities, however. One-third said that they did not hold the beliefs of their community, but continued to be outwardly observant.

Initially, Trencher said, the questions had been multiple choice, with extensive options for each. But he worried that certain questions, for instance those that asked about a possible history abuse would be triggering for some respondents. (No general trigger warning was attached to the survey. Trencher notes that there was not a significant number of drop-offs as respondents went through the questions.)

Academics such as Steven M. Cohen, professor of Jewish social policy at the Hebrew Union College-Jewish Institute of Religion, and Mark Rosen, Director of Field Experience Programs at Brandeis University, were heavily involved in shaping the survey questions and with issues of methodology.

“In the end we decided to make it open ended,” he says. “I was a little nervous about how that would work out.”

The questions were crafted over a process of months, with drafts going back and forth between Nishma, Footsteps, Makom, and several academics, including Professor Cohen, for review. The survey went out this past March.

Analysts at Nishma then went through each response and found key words and phrases that could be used for quantitative analysis of the whole report.

The report was funded entirely by Nishma, which hopes to release one pro bono report each year on the Jewish community.

“It’s to do two things,” Trencher says. “It’s for the benefit of the wider Jewish community, so that we’ll know more about it, and also to create connections within Judaism, across different Jewish communities.”

Several people, Trencher noted, found the survey helpful, even therapeutic. He credits the open-ended nature of the questions.

“I just hope people read the comments so they can finally hear the voices of their spouses and kids.”