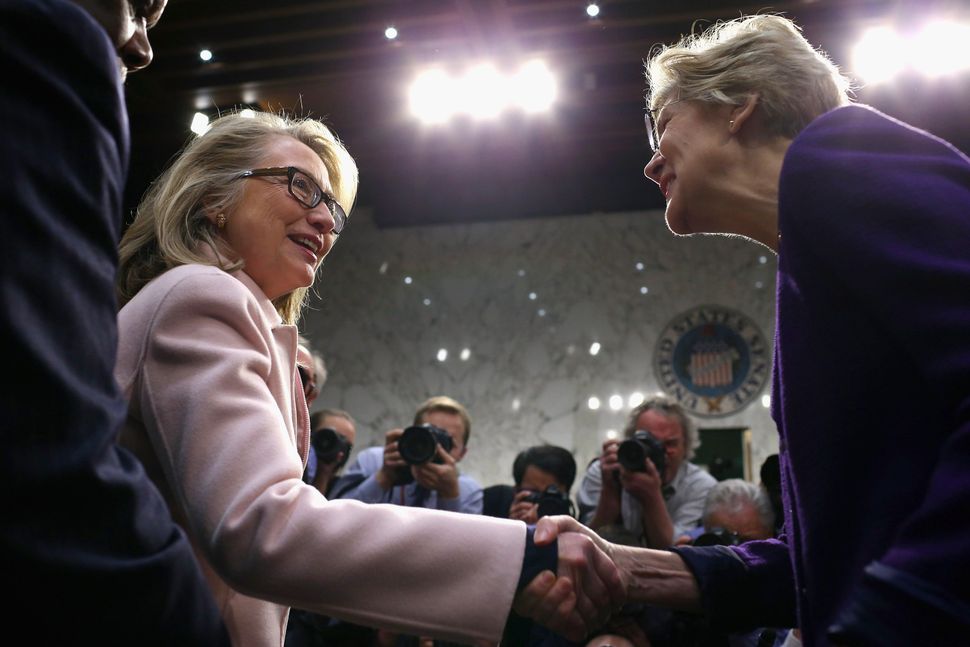 Warren would be the natural pick to win over supporters of another progressive Democratic icon — Vermont senator Bernie Sanders. The Bernie or Bust crowd, who are still uncomfortable with Clinton, may find Warren’s positions on social and economic issues just as exciting as Sanders’s.

But on Israel they disagree. Sanders made a point of challenging the party line by criticizing Israeli policies and demanding a Democratic platform that recognizes Palestinian rights; Warren chose to challenge progressives with a strong pro-Israel stance, much closer to that of the Democratic establishment.

“She talked to us a lot about this,” said Jeremy Burton, executive director of Greater Boston’s Jewish Community Relations Council. “She has made clear time and again that she believes in the specialness of America’s relationship with Israel.”

Warren has proved herself a valuable asset to the Clinton campaign, attacking Donald Trump on his own turf with a mix of sharpened Twitter comebacks and personal attacks. Campaigning alongside Clinton in Cincinnati on Monday, June 27, Warren described the presumptive Republican nominee as an “insecure money grubber.” Trump refers to Warren as “Pocahontas” because of her claim to Native American heritage, and to Clinton as “Crooked Hillary.”

To be sure, there are at least two other names on Clinton’s shortlist — Virginia senator and former governor Tim Kaine, and Housing and Urban Development Secretary Julian Castro.

Each could help Clinton with a different constituency: Warren could bring back Sanders supporters by strengthening her liberal credentials; Kaine would be valuable in winning his home state, Virginia, which is a key swing state, and Castro could shore up the Hispanic vote.

All three come with long-lasting ties to their local Jewish communities. And Kaine has a history of supporting legislation promoted by the pro-Israel lobby, with the exception of the Iranian nuclear debate, in which he sided with President Obama.

Kaine, a moderate centrist, is a natural choice for the pro-Israel establishment. But Warren’s positions on Israel have taken some of her followers by surprise, as she chose to defy the liberal orthodoxy that views criticism of Israel as central to the progressive agenda.

She has even been willing to pay a political price for her stance on the Jewish state. She’s defied the expectations of some progressive supporters to criticize Israel and oppose the party’s near-automatic support for pro-Israel funding and legislation. Instead, she’s hewed to a line close to that of Clinton and mainstream Democrats.

In 2014, after the Israeli military operation in Gaza, a voter challenged Warren’s vote in favor of a bill giving $225 million in emergency funding to Israel’s anti-rocket defense system.

“We are disagreeing with Israel using their guns against innocents,” the voter, John Bangert, said to Warren during a Cape Cod town hall meeting. “The vote was wrong, I believe,” he said to an applauding audience. Another participant pointed to the number of Palestinian civilian casualties and questioned Warren’s support for Israel.

But instead of backing down, Warren doubled down, using the confrontations to articulate, despite the unsupportive audience, her pro-Israel philosophy. “Israel lives in a very dangerous part of the world, and a part of the world where there aren’t many liberal democracies and democracies that are controlled by the rule of law,” she said. “And we very much need an ally in that part of the world.”

She also argued against the claim that Israel used disproportionate force against Palestinians in Gaza, and rejected the idea of leveraging American funding to pressure Israel not to expand the building of West Bank settlements. 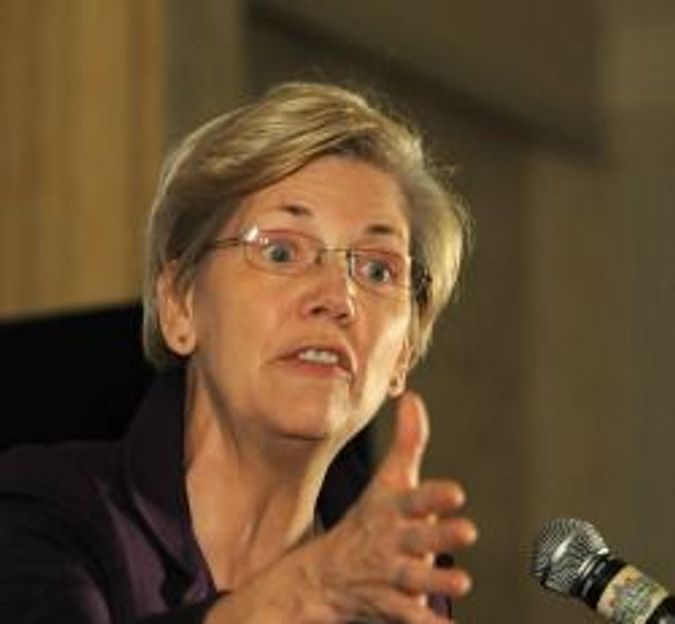 Warren’s Israel policy, while upsetting some supporters and pundits, has not diminished her standing as the leading voice of the Democratic Party’s left wing, second only, perhaps, to Sanders. The attention-grabbing rhetoric she aims at Trump and her position as a Clinton surrogate may also strengthen the candidate’s position among liberals.

In Massachusetts, Warren hit the right chords with pro-Israel supporters, though not always toeing the line set by the American Israel Public Affairs Committee, the largest pro-Israel lobby.

Activists at a communal pro-Israel rally, held in Boston in 2012 to express solidarity with Israel, read a supportive statement Warren wrote just before she was sworn into office. In 2014 she met with local Jewish leaders to express her support for Israel during its war in Gaza.

Warren has attended the annual dinners hosted by the AIPAC Boston chapter and counts among her supporters some mainstream pro-Israel backers, including Steve Grossman, a former Massachusetts treasurer who was also president of AIPAC.

Of course, Warren isn’t an AIPAC toady. She has close ties with J Street supporters, and some of her key backers, Paul Egerman, who served as her campaign finance chair, and Alan Solomont, are top donors of the dovish lobby. In 2014, Warren was one of only 12 senators not to sign on to an AIPAC-sponsored letter warning the Palestinians against taking their case to international bodies.

And she was one of the first Democrats to declare her support for an Iran nuclear agreement last summer, despite efforts by many in the organized Jewish community, including the Boston Jewish Combined Jewish Philanthropies, to sway Democrats against the deal.

Like other Democratic lawmakers who supported the nuclear agreement, Warren has since mended relations with AIPAC and pro-Israel activists who opposed it.

“It’s important to understand that she has not made foreign policy a centerpiece of her agenda,” said Burton, whose group did not take a position on the Iran deal. Warren’s strong suit has always been fighting against the financial service sector and for consumer rights; her friends in the Massachusetts Jewish community believe that is what she’d like to focus on if tapped to run for vice president. Next to Clinton, who comes with vast experience and knowledge of foreign policy, it is clear that any vice presidential nominee will likely focus on domestic issues.

Progressives and liberals would embrace a Warren pick, while Virginia’s Kaine would please moderate Democrats.

“He’s not going to appeal to the Bernie Sanders voters. He’s a centrist,” said Ron Halber, executive director of the Greater Washington JCRC, who has forged a relationship with Kaine both as governor and as senator.

Like Warren, Kaine was an early endorser of the Iranian nuclear deal, and like her he chose to skip Israeli prime minister Benjamin Netanyahu’s speech to Congress. But as a middle-of-the-road-Democrat and a co-sponsor of Iran-related legislation, Kaine made choices that, when it came to the nuclear deal, drew attention in the pro-Israel community. 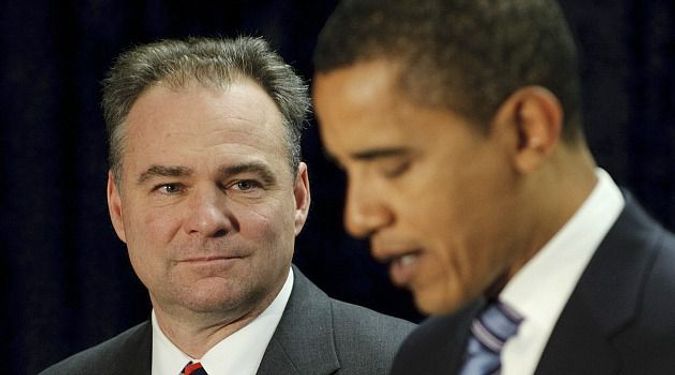 “I’m not dumb, I knew not going to the speech might make some folks mad with me — there would be a political price,” Kaine told the Forward shortly after. “But I felt so strongly as a matter of principle that this was done in an entirely inappropriate way.”

Kaine, who has also served as head of the Democratic National Committee, has visited Israel several times and has supported the funding of Iron Dome systems and the U.S.-Israel Strategic Partnership Act. Halber noted that he was a “very good friend” of the U.S.-Israel partnership, but he added that if chosen as vice president, he may want to see movement on the Israeli-Palestinian issue. “His social background and his sympathy to the oppressed will likely make him want to see a solution,” he said, “but he will also support defending Israel in the U.N. and expanding the relationship.”

Kaine is a member of a small group of senators who participate in a biweekly reflection group organized by the Faith and Politics Institute.

“I had many, many personal deep conversations with him, and he is genuinely a friend of Israel,” said Rabbi Jack Moline, one of the group’s moderators. Moline believes that much of Kaine’s worldview was shaped during his work as a Jesuit missionary in Honduras. “It had an immense influence on his understanding of the need to make the world a better place.”

In Virginia, Kaine hosted the first Passover Seder in the governor’s mansion.

Castro, another shortlister, does not come from Congress and has had less of a chance to deal with issues relating to Israel. As mayor of San Antonio, Texas, he was known for his good relationship with the city’s small Jewish community and had visited Israel on an economic mission.