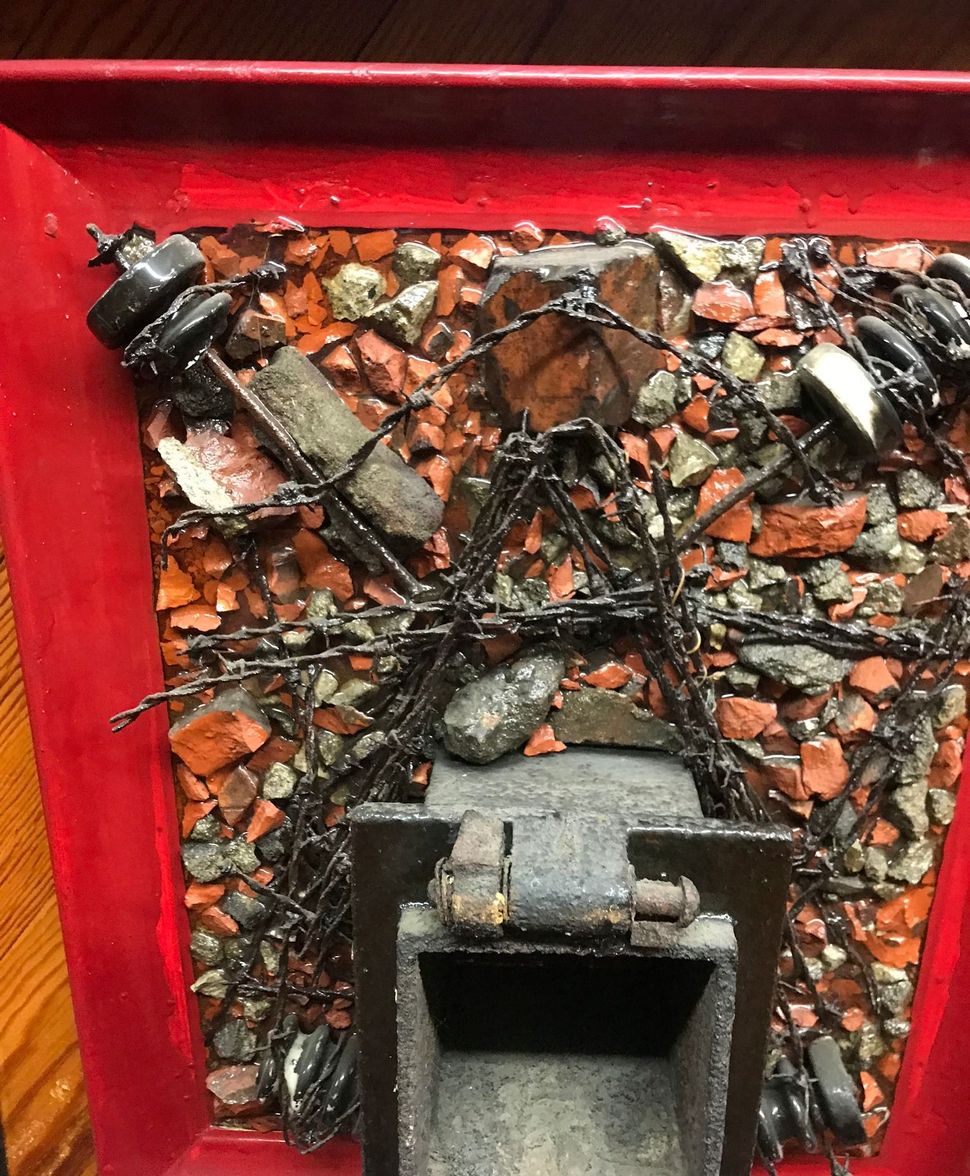 What do you do with 665 pieces of the Holocaust? That’s the question facing Edie Mermelstein, the daughter of survivor, human rights activist and collector of Holocaust artifacts Mel Mermelstein as the latest Yom HaShoah – Holocaust Remembrance Day – approaches on May 1.

Since 1972, Mel has displayed his pieces as a teaching tool for Orange County students, first in a trailer and eventually in five adjoining cargo-shipping containers at his Huntington Beach, California lumberyard. The collection includes artifacts shipped to Mel from the Auschwitz museum, which he visited approximately fifty times after the war.

Some of the artifacts, such as a pre-war Torah scroll, remain in their original form; others, like the gas chute from crematorium number 5 where his mother and sisters perished, were manipulated and placed within an intricate display. Together, it is at once a museum, a memorial to his family, and a physical manifestation of one man’s efforts to grapple with his own trauma.

Joshua Anderson, a language arts teacher at Huntington Beach High School, has taken his 10th grade students to visit the trailers every year for the last 15 years. “It makes the topic come alive,” he says. “There’s no textbook, there’s no movie, there’s no article that can do the same thing.”

However, the same eccentricity and individuality that has driven hundreds of classes to experience Mel’s visual and oral narrative poses a direct obstacle to securing the entirety of the collection with a permanent home in a venerated institution.

The anxiety Edie and Mel feel about the fate of his collection are exacerbated by President Trump’s determination to deny asylum to immigrants and their fears about a future without Holocaust survivors alive to ensure the past doesn’t repeat itself. 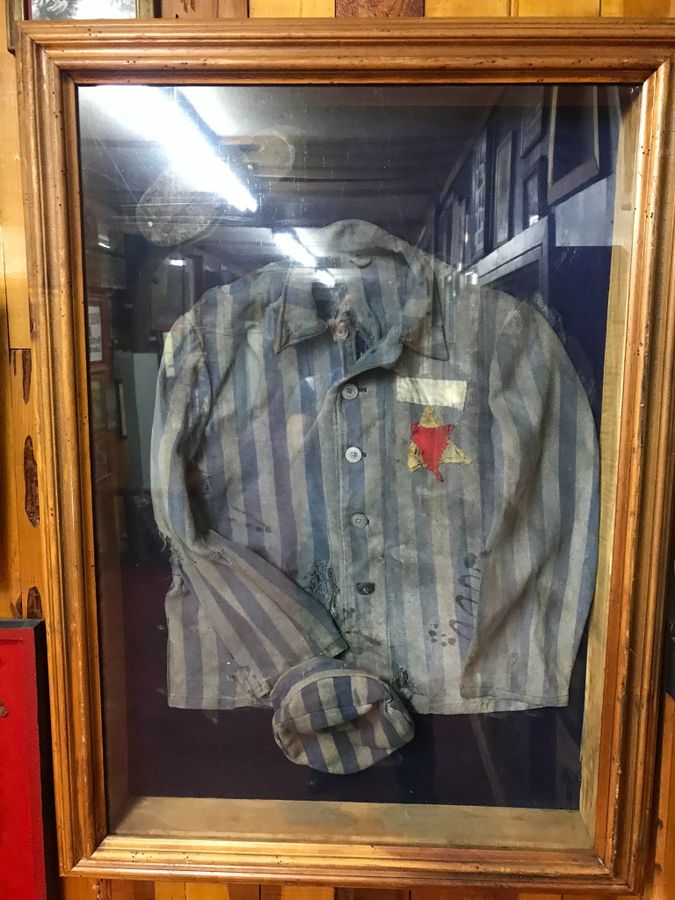 “Museum curators want items that are untouched,” said Edie. Her father, for example, created a sculpture of a gas chamber by welding together eating utensils confiscated from the victims. The U.S. Holocaust Memorial Museum in Washington, D.C. would reject such an altered artifact.

“Yet I see through the eyes of students the power and the impact of my dad’s creations,” she says. “[The students are] analyzing these pieces and something happens when you’re in there and surrounded by all of them. It’s more of an emotional experience on a guttural level.”

Born in Czechoslovakia, Mel was imprisoned in Auschwitz in 1944 at the age of 17. In January 1945, Mel walked about 155 miles to Gross-Rosen as one of the roughly 56,000 prisoners forced to evacuate the camp by way of a death march. That February, he was transported to Buchenwald where he deteriorated from illness and starvation for two months until the camp was liberated on April 11. By that point, Mel, who stood at 5’10”, weighed 68 pounds and had no family and no home.

Aware of an aunt and uncle in New York, Mel immigrated to the United States. After serving in the U.S. Army during the Korean War, he returned to New York where he met his future wife Jane and worked for the United Nations. In 1960, they uprooted their lives and relocated to Los Angeles.

In 1967, two years after Mel opened his pallet manufacturing business, President Abdel Nasser of Egypt appeared on television, calling for the annihilation of the Jewish people. “My dad saw it happening again and he couldn’t understand how an Egyptian president could go on national television and call for the destruction of Jews,” says Edie. “That stimulated him…he really had promised his dad — somebody has to live to tell, somebody has to make sure they don’t bury this, and make sure they don’t cover this up.”

That year, he made his first trip to Auschwitz, where he was presented with the plaque that launched his collection. In the 1970s, Mel founded the Auschwitz Study Foundation and in 1985, he settled a five-year-long legal battle against the Institute for Historical Review, an organization whose platform called for Holocaust denial and revisionist history. The case became the subject of the 1991 film, “Never Forget,” starring Leonard Nimoy. 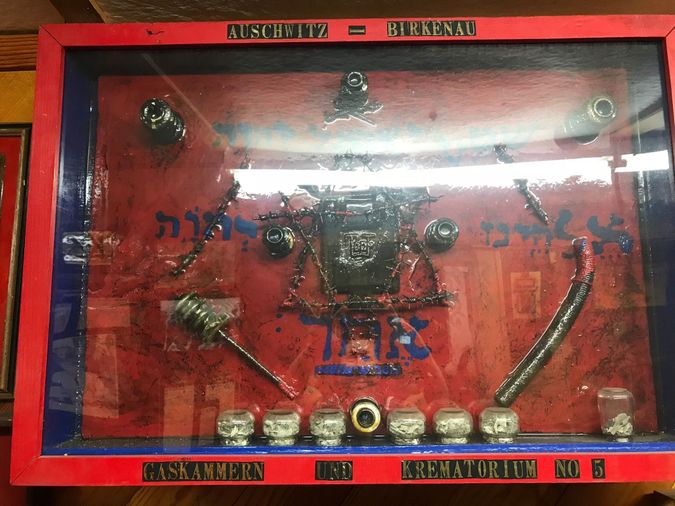 While some of Mel’s collection could be digitized, and researchers are experimenting with new technologies such as virtual reality and artificial intelligence to recreate the experience of Q&As with survivors and tours of the camps, Holocaust deniers aren’t interested in any of that.

Memory and education are important, said Amy Sodaro, an associate professor at CUNY and the author of “Exhibiting Atrocity: Memorial Museums and the Politics of Past Violence.” But in the absence of a strong commitment to human rights, and in the presence of so much racist rhetoric and violence worldwide, she said, it’s hard to say how much museums can accomplish.

Even within the museums’ walls, conflicting agendas regarding whose stories deserve to be prioritized — decisions closely tied to politics and the museums’ key financial backers — turn what should be bastions of morality into catalysts for debate. Recently, Yad Vashem, which commemorates the Holocaust in Israel, received criticism for perpetuating Benjamin Netanyahu’s political agenda by welcoming far right-leaning dignitaries such as Hungary’s Prime Minister Viktor Orban and Austrian Chancellor Sebastian Kurz.

Starting this spring, a portion of Mel’s pieces will be on display at the Cornelia Connelly School, an all-girls Catholic high school in Anaheim that’s offered itself up as a temporary home. Although it’s not a permanent fix, it will buy Edie and her team of advisors more time to find a long-term solution—ideally one that’ll preserve the integrity of the collection down to its original order and setup—and will afford this year’s batch of 10th graders with the opportunity to see the subject of their studies up close in a secure environment.

For Edie, anything is better than suppressing her dad’s narrative in boxes and allowing the facts to fade into the background.