Do American Jews Really Care About – Or Understand – Israel’s Elections? 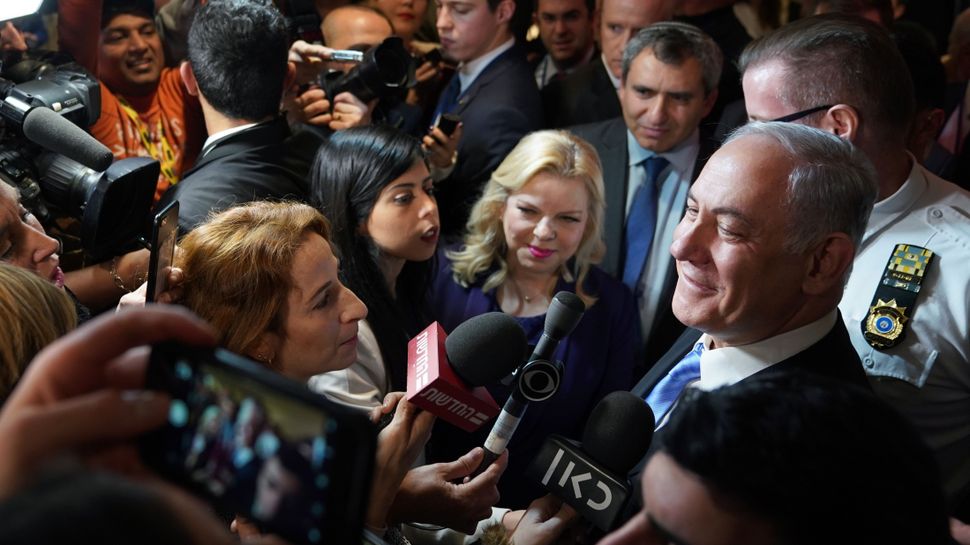 Netanyahu in New York in 2018. Image by Getty

On a typical evening after putting their daughter to bed, Dov Waxman and Stephanie Davidson will sit on the matching rocking chairs on their back porch and chat about what’s driving them nuts at work. One night last week Waxman, a professor of Israel studies at Northeastern University, was fretting over an op-ed he wants to write about the outcome of Israel’s elections, in which Prime Minister Benjamin Netanyahu is seeking to extend his already record-breaking time in office.

Davidson asked why he was making it so complicated. He’d write one piece if Bibi won, and another if Bibi lost, she said.

“In my case, I’m obsessively watching what happens with Israeli politics” broadly, Waxman said. “She wants to know, will Bibi be Prime Minister again?”

Waxman and Davidson represent American-Jewish interest in Israeli politics writ small: One of them exists in a small bubble of obsessives, the other is relatively disinterested. For the bubble, the Tuesday elections are as important as an American presidential race, if not more so, since they concern the future of the Jewish people. The majority of American Jews, however, don’t care at all, or at most, care about whether Netanyahu will continue his reign.

The apathy toward these elections comes against a background of deeper tension between American Jewry and Israel. The world’s two largest Jewish communities are increasingly divided, according to a 2018 survey by the American Jewish Committee. That year, almost a third of American Jews responded that they considered Israeli Jews “not part of my family.” The 2019 survey found an eight-percentage point drop in the number of American Jews who agreed that caring about Israel is an important part of being a Jew, to 62% from 70%.

There are also other reasons, more specific to this election, that explain why American Jews may be tuning out, Waxman said.

For one, Israel already tried to elect a new government in April. Netanyahu failed to form a coalition, however; hence the new elections that will happen on Tuesday.

“It’s like hey, didn’t we just have elections?” said Rabbi Rebecca Schorr, an activist and writer. “And since the players are still the same, and Bibi is still at the forefront, still cozying up to President Trump, and he’s still making these broad, antagonizing statements, then why should we pay attention?”

The gravitational pull of American politics is a factor in American-Jewish apathy to Tuesday’s elections in Israel, said Rabbi Debra Newman Kamin, president of the Conservative movement’s Rabbinical Assembly. Waxman said something similar.

Kamin talks about the Israeli elections with her colleagues, but interest at her synagogue, Am Yisrael Conservative Congregation, in the Chicago suburbs, is low.

Kamin says she can’t blame them.

“I can’t think of one issue — climate change, gun control, the border, clean water — that I care about that’s not under attack in the United States,” she said. “If they’re tuned out [on Israel], I just can’t be that critical of it, because I just feel like we’re all under a lot of stress.”

Another challenge for Americans: The Israeli parliamentary political system is very different from the American one. In Israeli general elections, several dozens parties vie for spots in the legislature, or Knesset. The party that wins the most seats then tries to build a coalition that gives it enough votes to reach the majority required to pass new laws.

“American Jews are Americans,” said Shayna Weiss, the associate director of the Schusterman Center for Israel Studies at Brandeis University. “To know the difference between Otzma Yehudit and Yamina, and Yehadut HaTorah and Shas — Americans have enough trouble with a two-party system.”

Even the American Jews who care about the elections have a skewed sense of what they mean, said Dr. Sara Yael Hirschhorn, a visiting assistant professor in Israel studies at Northwestern University. This starts with a misunderstanding of just how focused on achieving peace Netanyahu’s main opposition, the moderate Blue and White party, really is. Americans falsely believe, she said, that Blue and White’s leader, former Israeli Defense Forces General Benny Gantz, is ready to restart the peace process, while Netanyahu is not.

Indeed, a 2017 Pew Research Center study found that American Jews are broadly more hopeful about the future of a two-state solution to the Israeli Palestinian conflict than Israelis — despite living 6,000 miles away.

American Zionism “can be categorized as a feeling without deep knowledge,” said Hirschhorn.

Likewise, some American Jews read their pet issues — access to the Western Wall, for example — into the Israeli elections in a way that doesn’t comport with Israeli priorities.

“People sitting in a bomb shelter in Sderot are not thinking about the state of egalitarian prayer at the Kotel,” Hirschhorn said.

On the other hand, for those who do care deeply about Israel’s elections, there’s ample fodder: a new unity party that is the biggest threat to Netanyahu in years; the return of a former prime minister with ties to Jeffrey Epstein, the billionaire American sex offender who recently died in prison; a racist party that is of utmost strategic importance to Netanyahu; the rebellion of a one-time Netanyahu ally; unsubstantiated claims of voter fraud; racist Facebook posts and promises (or threats) of annexation.

Rabbi Levi Shemtov, the vice-president of Chabad’s leading chapter in D.C., says he gets a new email every 15 minutes from someone with an opinion about how the elections will go. His is the preferred synagogue of Ivanka Trump and Jared Kushner, the president’s Jewish daughter and son-in-law.

What’s more, Waxman said, the special relationship between America and Israel has reached a new level of closeness under the Trump administration. Trump has supported Netanyahu at home in key ways, like moving the American embassy to Jerusalem. Both Trump and Netanyahu use similar scare tactics to reach their base, both administrations have been accused of corruption and they appear to be allied on how (or whether) to resume the peace process.

Indeed, that’s why what interest there is tends to focus on Netanyahu.

“If there is a surprising election result, like if Benjamin Netanyahu is not prime minister, then people will pay attention, because that’s the end of an era,” said Weiss. “But we don’t know that yet.”

Do American Jews Really Care About – Or Understand – Israel’s Elections?