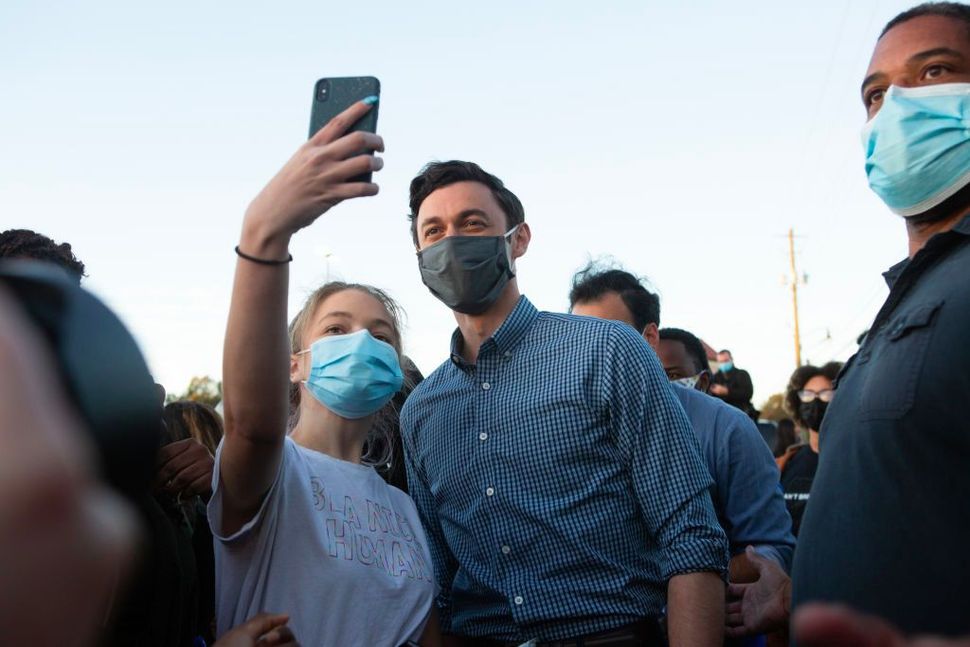 A masked Ossoff poses for a selfie at a November 15 rally in Marietta, Georgia. Image by Getty

The Forward has been closely watching the two Senate races in Georgia since the summer, when Republican Sen. David Perdue ran an online ad that enlarged the nose of his Jewish opponent Jon Ossoff.

The contest hasn’t gotten any prettier since then — but the stakes have increased. Both Senate races advanced to runoffs after no candidate secured at least 50% of the vote in November, and control of Congress now hinges on whether Ossoff and his Democratic counterpart Rev. Raphael Warnock can defeat Perdue and Sen. Kelly Loeffler.

While the rest of the country was able to take a break from politics after the presidential election was (kind of) settled two months ago, the climate in Georgia has only heated up as national attention turned to the Peach State. “We don’t get a moment to rest in Georgia,” said Allison Padilla-Goodman, vice president of the ADL’s Southern offices.

While Jewish attention originally focused on Ossoff, who if elected would become one of the few Jewish senators from the Deep South in modern history, Warnock’s stance on Israel quickly became a flashpoint. Jewish leaders in Atlanta rallied around Warnock, as did Ossoff, but Loeffler and Republicans said video of a past sermons spoke for itself.

Teens on TikTok, meanwhile, have been in the tank for Ossoff since Day One.

Offline, Jewish teens in Georgia have been helping register those old enough to vote and explaining why it’s important for them to turnout today. “Everyone deserves to have their voice represented in government,” one said.

Warnock’s close relationship with Rabbi Peter Berg of The Temple in Atlanta was one example of a longstanding political alliance between white Jews and the Black community in Georgia. That relationship has helped both Ossoff and Warnock in their Senate bids.

But while the two communities maintain close ties on many political issues, their central religious institutions — the synagogue and the Black Church — play far different roles. With Warnock’s past comments and actions as a Black minister coming under scrutiny, we explored the intersection of politics and theology in the Black Church.

Finally, we rounded up the key Jewish themes that have swirled around the Georgia runoff.