I ended Inauguration Day at Dodger Stadium. Actually, three miles outside Dodger Stadium, the last car in a line to get inside the nation’s largest Covid-19 vaccination site.

I was taking a relative whose work in health care made her eligible for an early shot. We had a 5 p.m. appointment, so we joined the line at 4. Someone had told me his friend had made it through in 25 minutes two days earlier, and I, like an idiot, believed him.

I was still on a patriotic high from watching the day’s festivities in Washington, where it was already evening. We tuned Sirius radio to CNN to hear Tom Hanks narrate the fireworks display; as well as former Presidents Barack Obama, George W. Bush and Bill Clinton congratulate Joe Biden; and even sang along when Katy Perry belted “Fireworks.” The two lanes of cars moved forward at a crawl. Every time I got the urge to complain, I thought: there’s a new vaccine, a new president, let it go.

That lasted about 15 minutes.

I checked Twitter for #DodgerStadium. Sure enough, a user named @theJennyMorant had just used the hashtag to tweet, “In line. Total nightmare and disaster.” I Googled her — Compass Real Estate, Manhattan Beach — and texted to the number on her web page. Hi Jenny, I’m Rob, somewhere behind you in line. Saw your tweet. How long is the line, really?

Three hours so far, she texted, not even close.

I rolled down the window and, wearing a mask, shouted to the UPS driver beside us. “Three hours at least!” He looked at me like I was speaking in tongues. I asked if he was signed up to get a vaccine. Then it dawned on him.

There were no signs to indicate how long the wait was. No cones to guide traffic. No one to tell us if there was enough vaccine, or what time they closed the gates, or…anything.

I checked Twitter again. P.J. Byrne, whose Twitter handle listed his acting credits — this is L.A.— had just tweeted, “Taking my mother-in-law for a vaccine. Been in line 4 hours probably have another 2 to go…. Hit the restroom before you go, bring water and snacks, make sure your gas tank is full. Good luck!”

Oh, there were also no Porta-Potties.

@theJennyMorant and I stayed in text touch.

Me: I’m so worried they’ll close on us.

She was worried her 80-year-old father wouldn’t make it without a bathroom break. I told her I was trying to focus on being grateful that there is a vaccine. “Truth,” she typed.

We settled in. I made work calls, checked e-mails and Googled “PJ Byrne TV shows.” I made the mistake of rechecking #dodgerstadium and saw that someone who had waited six hours tweeted, “They had A YEAR to plan this!”

The fireworks were long finished and the Bidens, I imagined, were already asleep in the White House when the gates of Dodger Stadium appeared around 7 p.m. local time. Three hours had passed since we joined the line. @theJennyMorant had warned me the wait inside the gates was two hours, but at least we were in. Two hand-written signs directed us. Hand-written. They had a year.

Inside it was…otherworldly. Thousands of cars snaked back and forth through a switchback of infinite orange cones. Sodium lights glowed through a haze of exhaust. In the distance, tiny figures in lab coats walked between more lines of cars and white pop-up shelters.

People stalled their cars in the middle of the snake to run to a center area where there was…one Porta-Potty. We were tempted, but we also suspected there will never be a vaccine strong enough to protect us from whatever was inside that toilet.

My mind started to go there — they had a year. Republicans in D.C., Democrats in California and L.A. — was the best they could do this chaotic set of a sci-fi horror show starring, say, P.J. Bryne? Then CNN broadcast an interview with Amanda Gorman, the 22-year-old poet who show-stopped the inaugural. My whining felt shallow next to her simple profundity. I promised myself (again) I’d stop complaining.

The line moved. Young people with flashlights directed our car into one of dozens of straight short lines. We waited as other staffers with e-tablets moved up and down the rows, checking names. People in white coats pushed metal carts piled with red beer coolers and syringes up and down the rows.

The carts looked suspiciously like the ones you’d see the old Latina women use on Dodger game days to sell trays of bacon-wrapped hot dogs and chips. I wasn’t going to ask.

There was a knock on my window and I rolled it down to find a man wearing a mask and a Fire Department windbreaker with the name “Garcetti” stitched over his left pocket. He asked my name. Then he said, “I know you,” and I said, “Mayor Garcetti?”

I first met Garcetti, who became L.A.’s first Jewish mayor in 2013, back when he was on the City Council, and we’d been together for a lot of interviews, panel discussions, Israel Festivals, and even a Bat Mitzvah or two since then. Inside every big city, there’s a shtetl.

He was helping out, he said, to see how things were working. 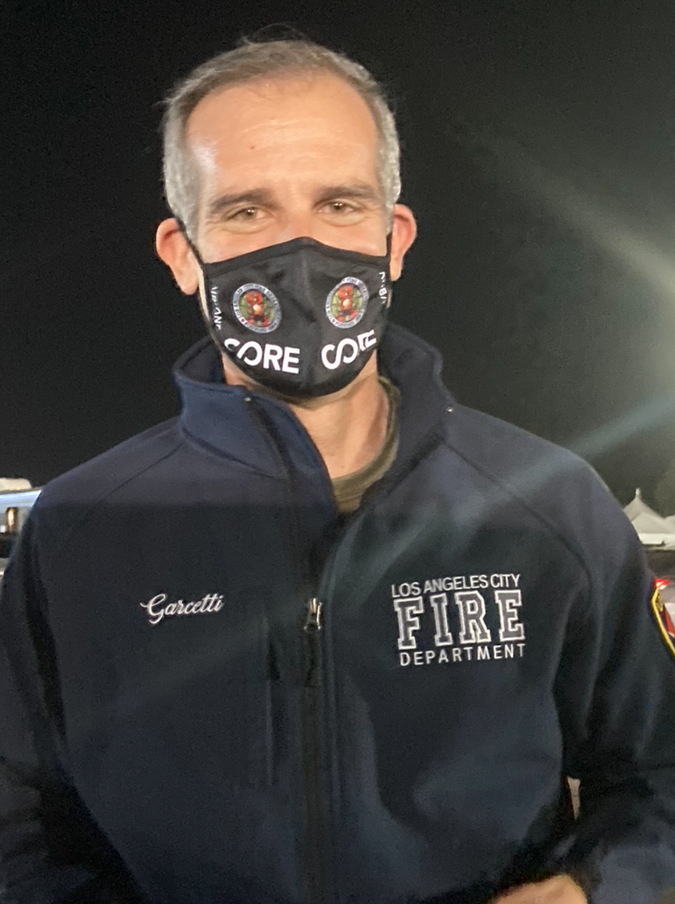 “It’s the largest vaccine site in the country,” he noted. Then, before I could unleash my questions, “It’s going to get much better.”

He said the operation had more than doubled its capacity in a week, to 7,730 vaccinations per day. Before I could say a word, Garcetti promised that in another day, there would be more signs, more volunteers, more Porta-Potties.

The mayor had to run to the thousand or so cars behind us. He told us to wait five minutes after the vaccine in case there was a reaction, then he was gone.

I checked Twitter: @theJennyMorant had posted a pic of her dad: “SUCCESS!!!!”

A few minutes later, we were done, too.

Less than 12 hours earlier, Biden had promised to bring effective government back into our lives, to beat the virus, end systemic racism, right the economy for all. I am happy to have a government that believes in government, but belief alone doesn’t shorten the line or install more than one Porta-Potty for 6,000 people.

I want to believe the promises Garcetti made to me, like I want to believe our new president. But we know how big the shadow is between actions and intentions, and we’ve all seen the scoundrels who rush to fill the hole that disappointment digs.