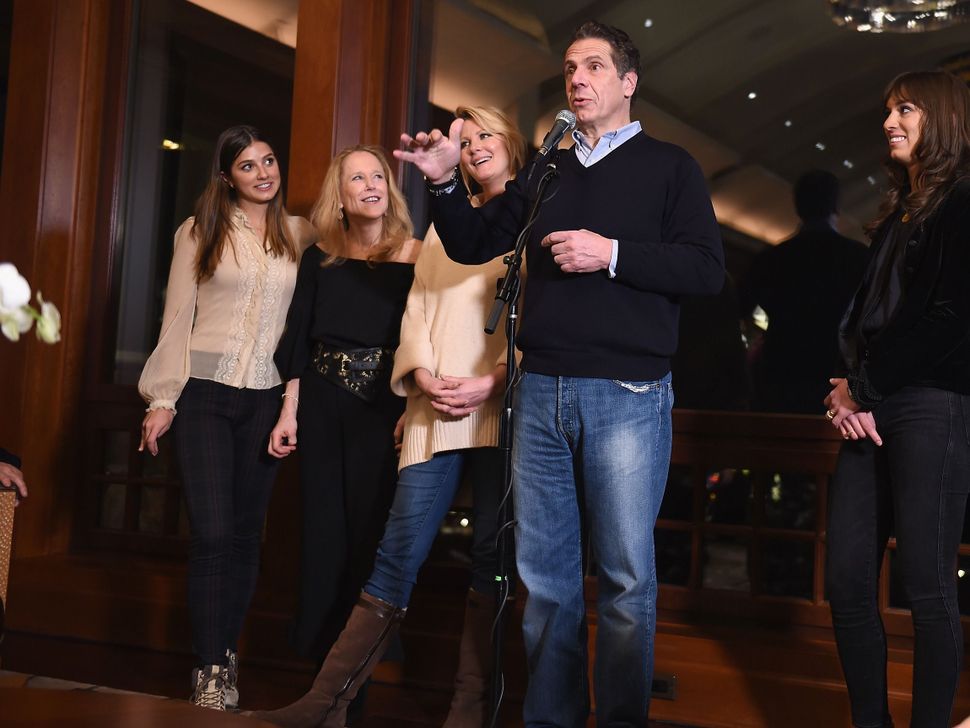 I can’t stop thinking about Andrew Cuomo’s daughters. I’ve never met them, I know virtually nothing about them, and before Tuesday I could probably not have even named the three of them without a little help from Dr. Google. But I’m declaring Cara, Mariah and Michaela Cuomo the most important figures in the news this week, based on their father’s invocation of them 14-and-a-half minutes into his 21-minute, deeply flawed, half-apology resignation announcement.

“In many ways, I see the world through the eyes of my daughters,” he said. “I have lived this experience with and through them. I have sat on the couch with them, hearing the ugly accusations for weeks. I’ve seen the look in their eyes, and the expression on their faces, and it hurt.” He called them his “three jewels,” and added: “My greatest goal is for them to have a better future than the generation before them.” 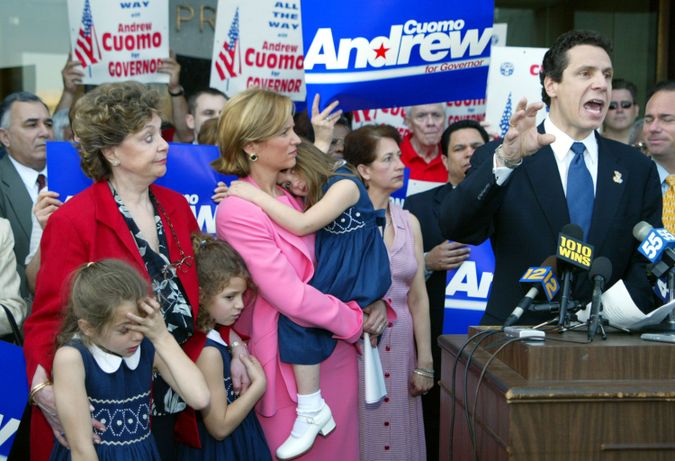 Andrew Cuomo announces his candidacy for Governor of New York State on April 16, 2002 outside the Supreme Court Building in Mineloa, New York. He is joined by family, including his three daughters, Mariah, Cara and Michaela, wearing matching blue dresses. Courtesy of Getty

What I’ve learned since then (thank you, Google) is that the twins are 26; Cara graduated from Harvard and works as head of diversity for something called Inclusion Summits, Mariah went to Brown and has worked in human rights and social media.

Perhaps most interesting, given the accusations against their father, is 23-year-old Michaela’s involvement in the #MeToo movement: at Brown, she was a sexual assault peer educator, founded a group called CUSP: Cultivating Upstanders for Sexual assault Prevention, and wrote an article warning that survivors can be “continuously victimized through institutional gaslighting.” More recently, she produced “How are we, really,” a project about survivors of interpersonal violence; one image of Michaela online shows her with “STILL NOT ASKING 4 IT” written in black marker on her upper chest, a declaration that women’s clothing choices are never an invitation for unwanted advances.

Imagine Andrew Cuomo sitting on the couch with Michaela as the devastating Attorney General’s report detailing accusations of his harassment and abuse of at least 11 women hit the news.

Jewish tradition is clear, from the Ten Commandments down through generations of rabbinic teachings, on the importance of honoring one’s parents. But what of honoring our children? What are our responsibilities to our offspring, beyond having them (be fruitful and multiply) and the basics of food and shelter? Our patriarchs and matriarchs were certainly not the best parenting role models, what with all the nonsense in Genesis about choosing a favorite child for birthrights and blessings, not to mention the binding of Isaac.

We talk a lot about teaching our children; Andrew Cuomo reminded us that teaching is as much about what we do as what we say. This is also outlined in the Torah — maaseh avot siman levanim, is the phrase: the actions of the fathers are a sign for the children.

It’s another life lesson that has been magnified by the pandemic. One of the side effects of working and schooling from home has been the inevitable integration of the various elements of our lives, and the distinct strains of our personas. When my kids wander down to my basement office to ask about a snack or a ride, they often overhear me interviewing a job candidate or leading a team meeting or talking to a communal leader or complaining to a customer-service representative. They’ll later — sometimes much later — mention something from these eavesdropped moments, something I didn’t realize they’d remember and maybe didn’t even realize I was saying.

It’s a great mirror back on my behavior, a check on if I’m being my best self — the person I want to be for my children — even when I’m stressed or frustrated or overwhelmed. They notice if I talk differently to a subordinate or a superior or a stranger. We’re not just role models showing our kids, say, how to “honor thy parents” or do other specific mitzvot, we’re role models in how we work, how we lead, how we live. 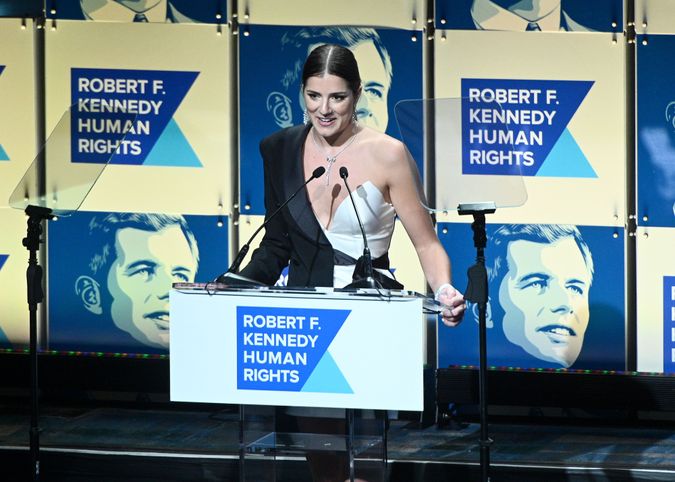 This is new for most people, since work used to happen far away and behind closed doors and during set hours. But it’s been true forever for public figures like Andrew Cuomo. He is hardly the first scandal-scarred politician to step aside with a specific apology about how his behavior hurt his family. And examining how such people parent has long been a legitimate lens into their character.

Maybe I can’t stop thinking about Cuomo’s kids, especially Michaela, because I am the youngest of three girls myself. A few years ago, Cuomo said at a rally for abortion rights, “God told me I was a feminist when he gave me three daughters.” It’s very similar to something I’ve said frequently about my own fairly old-fashioned father.

I often wonder: if my dad had the son he’d so deeply hoped to name after his beloved grandfather, Yitzhak Yehoshua, would there have been different expectations for the boy and the girls around education, Jewish practice, balancing parenting and work? No way to know, of course. What we do know is that my father pushed his Orthodox shul to make space for us to have “Bat Torahs” as we turned 13, and that we all played varsity sports, went to elite college, built serious careers and have taken leadership roles in our egalitarian synagogues.

“My daughters have more talent and natural gifts than I ever had,” Andrew Cuomo said, sounding a lot like my dad. “I want to make sure that society allows them to fly as high as their wings will carry them. There should be no assumptions, no stereotypes, no limitations.”

Amen to that. But to get there, we have to live that — in public and in private, whether we are national leaders or line workers just trying to juggle Zoom calls and carpools. We’re sitting on the couch, real or metaphorical, with our kids, always. They’ll honor us when we honor them.

Each week, our news director, Benyamin Cohen, compiles some of our best stories for you to savor over Shabbat and Sunday. You can download and print a free PDF of them by clicking here, or browse them via the links below.