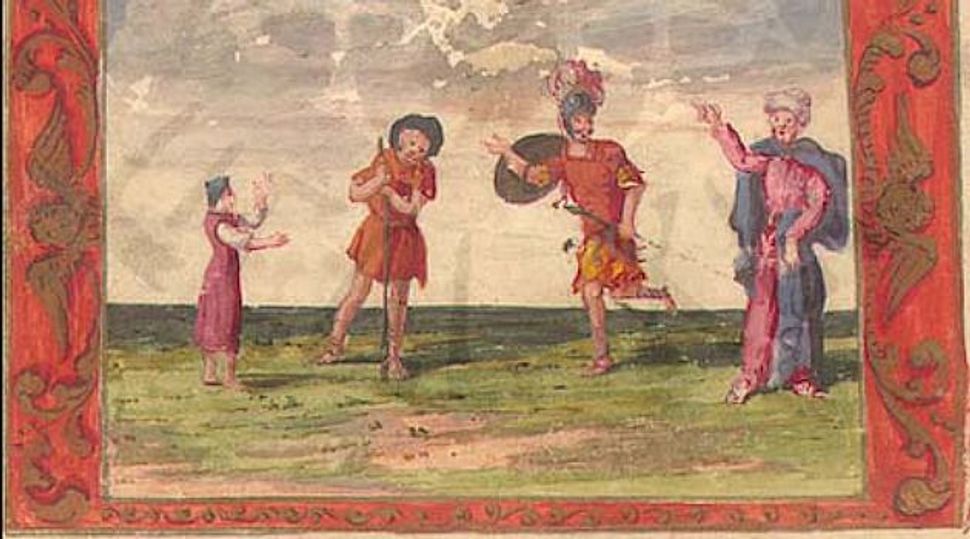 In the varied depictions, he’s a medieval knight; a dandy in a zoot suit; a boxer with fists held high; an aloof fellow with a Hitler moustache or a mischievous one who looks like Groucho; a jester; a boy with a mohawk and a yo-yo (really!), and (as once depicted in the pages of the Forward), a postmodern doubter of Zionism.

Yes, it’s the rasha, the Haggadah’s Wicked Son. As the only Jewish text that has, for centuries, been graced with drawings, the Haggadah provides an interesting peephole into how Jews in different times and places conceived of “wickedness.”

I lack graphic talent, and so I won’t likely ever illustrate a Haggadah. But if I did, mischievously mindful of the talmudic opinion that the embodiment of Esau’s essence that wrestled with Jacob looked like a talmid chacham, a Torah scholar, I might scandalously draw my Haggadah rasha with a beard and hat, just like the Wise Son’s. Wickedness has no “look”; appearances can be deceiving. As a great poet sang, sometimes Satan comes as a man of peace.

As to the identity of the rasha’s evil, that, too, has undergone changes over the years. There was a time, and a long time it was, when failure to make the effort to be Jewishly observant marked one as “wicked.” When observance was the norm and expectation of all Jews, those who shed it — usually to gain entry into Christian society — were consciously rejecting their Jewish identity and in turn were rejected by their fellow Jews. But even the most Haredi Jew today, who would consider non-observance unfortunate, even tragic, would never judge the nonobservant as evil.

What constitutes “wickedness” in the contemporary Jewish world is as variegated as our people itself. Some, in a distant echo of the medieval knight depiction, might consider the bellicose to be the bad guys; others, abusers; others still, supporters of the Palestinians, or falsifiers of Jewish beliefs, or Republicans.

Whatever rasha any of us might have in mind during the Seder, though, a startling thought about that nefarious Second Son belongs there, too.

It comes to us from a deep thinker, the Hasidic sage Rabbi Shmuel Bornstein (1856–1926) better known as the “Shem MiShmuel,” after the title of his collected observations on the Torah.

He points to something puzzling and thus pregnant with meaning.

The questions attributed to each of the Haggadah’s Four Sons come from the Torah’s text. The Wicked Son’s question, “What is this service to you?” is in Exodus 12:26.

When your child asks that question, Moses tells our ancestors, “you should reply, ‘It is a Passover sacrifice to Hashem, for He passed over the houses of the children of Israel in Egypt when He smote the Egyptians, and He saved our houses.’”

Hearing that, the Torah relates, “the people kneeled and prostrated themselves.” Rashi explains “at the news of the children.”

Surprisingly, Bornstein notes, that’s the question that will become the Wicked Son’s that is receiving all that adulation. What were the people so thankful for? The news that they would sire wicked descendants? Wouldn’t they have better saved their gratitude for hearing about the Wise Son, or even the simple one?

He explains: The rejoicing was at the news that there will be future wicked sons whose questions will demand our responses — that even such Jews will, despite their actions, be part and parcel of the people.

When we were just a family of individuals, before the Exodus, each member of the Jewish family stood or fell on his own merits. Ishmael was Abraham’s son and Esau was Isaac’s. But neither they nor their descendants merited to become part of the Jewish people.

After the Exodus, though, even a “wicked son,” our ancestors were informed, is a full member of the group, no matter how he acts. That represented a radical change. The people had become a nation. The passage through the Red Sea was a birthing — the newborn klal yisrael, the people of Israel

No wonder, Bornstein says, that the people rejoiced.

That truth is one we would do well to remember at our Seders as we consider the Second Son. Even the rasha’s contemporary counterparts, however we conceive of them — and all the more so those we simply regard as insufficiently connected to Jewish tradition and observance — are inseparable parts of us. We may lament their choices, but Passover’s message is that we should be elated they are all at the table.