Switzerland Begins To Confront Its Own Holocaust Past 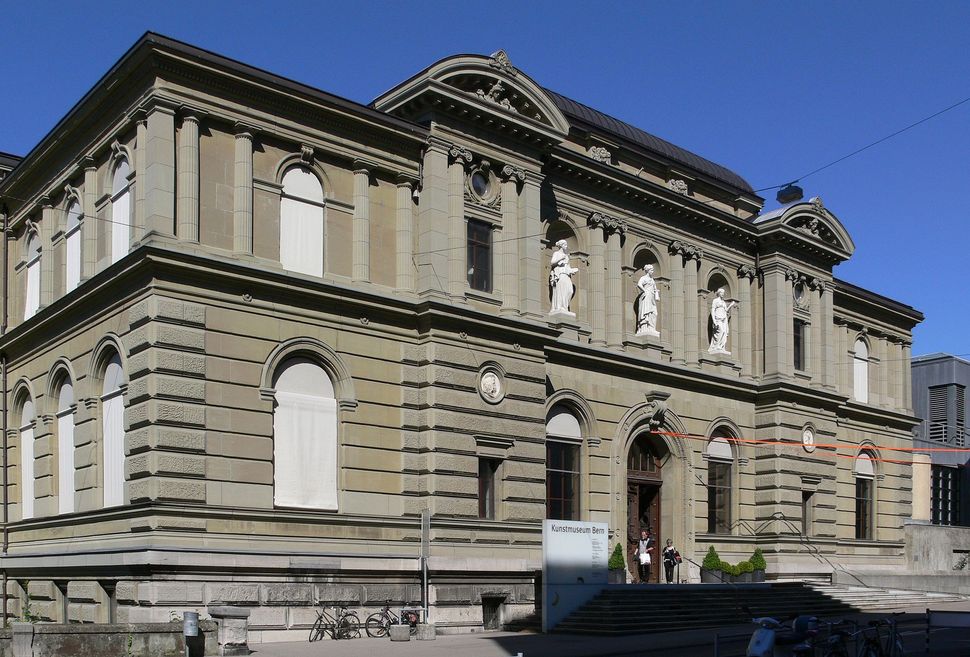 The Kunstmuseum in Bern is deciding whether or not do accept a collection that includes paintings stolen from Jews during the Holocaust. Image by Wikimedia Commons

What will it take for Switzerland to emerge, at long last, from the shadows of the Holocaust?

The question comes up, yet again, with two recent news items. First, a Holocaust survivor family has filed suit in both Switzerland and the United States, alleging that restitution payments for family art stolen by the Nazis went to a “sham” foundation set up by Swiss banks.

The second news item has a Swiss art museum, the Kunstmuseum Bern, preparing, finally, to decide on whether to accept from the son of a Nazi art dealer an art collection that holds a valuable trove of paintings stolen from Jews during the Holocaust.

Switzerland has long avoided confronting its Holocaust past. There have been many years of official denials of Swiss complicity. And then, since the late 1990s, grudging official acceptance of Switzerland’s obligation to compensate Holocaust victims whose families left money in Swiss banks, and its obligation to repatriate artwork. Unlike other European countries, including Germany, there has been little to no public acceptance of, and engagement in, Holocaust-related education and commemorations.

The good news is that, beginning this year, important segments of the Swiss public have begun to pursue serious remembrances about what happened in Switzerland, apart from the legal battles over financial compensation and restitution. Might this awakening extend to the banking, legal and government communities?

Answering that question requires appreciating Switzerland’s unique and complicated role during World War II. It was, of course, officially neutral, but because it was surrounded by Germany and its allies (including France and Italy), Switzerland made key concessions to the Nazis to ward off being invaded or otherwise penalized.

A prime example of how Switzerland swayed to the Nazi pressure played out at the Swiss Red Cross. In late 1941, the agency dispatched a team of teachers and nurses on a humanitarian mission to care for a group of about 100 Jewish children holed up at an ancient chateau just south of Toulouse in Vichy-ruled France, known as Chateau de la Hille. A leader of the team was Rosli Naf, a nurse who had worked for the renowned German physician Albert Schweitzer.

In August 1942, when French police rounded up Jews around the country at the demand of German authorities, the 40 eldest children under Naf’s care at the chateau were taken, over her objections, to a French transit camp. She bicycled to the camp, talked her way in and insisted she wouldn’t leave until “my children” were freed. A week later, the French relented and released the children to Naf’s care, just hours before they were to be placed into boxcars for the journey to Auschwitz.

In the months immediately after Naf’s heroic act, in late 1942, she and her colleagues from the Swiss Red Cross would assist several groups of teens in escaping from France and heading to Switzerland, where they were allowed to stay. But when a group of five teens tried to escape across the border in the first week of January 1943, German guards caught them. One of those captured was my aunt, Inge Joseph, who was then 17. She managed to escape the Germans by jumping out a bathroom window and then proceeding to flee across the border, into Switzerland. She walked far enough that she could see the lights of Geneva, when a Swiss gendarme arrested her.

She figured he might send her to a detention camp. But in response to the flow of children and adults escaping from France into Switzerland, the authorities had instituted a new law just a few days earlier requiring any refugee 16 or older to make it at least 10 kilometers into the country before being allowed to stay. Inge hadn’t made it far enough, and so she was returned to France, to the chateau, one of as many as 30,000 Jews sent back from Swiss border areas to Nazi-controlled France.

Within weeks of the aborted escape, Naf was ordered back to Switzerland and fired for intervening on behalf of the “Jewchildren from Chateau la Hille,” according to an internal organization memo. It concluded: “Unanimously agreed the Swiss Red Cross needs to totally distance itself from the director (Naf).”

But Naf’s colleagues who remained in France continued to help Jewish children to attempt escapes. Ten months after her aborted escape attempt into Switzerland, Inge made a second dash into the country. This time, with help from Swiss sympathizers, she was escorted through heavy woods the requisite 10 kilometers. Seven other young Jews were similarly aided in these dangerous cross-border escapes.

Naf and a dozen or so Swiss colleagues who helped Jews escape to Switzerland from France were mostly forgotten by their own country. When they were referred to at all, it was as “smugglers,” as if to suggest they were sneaking cigarettes, food and other bounty over the border for profit instead of saving lives.

But this past year, a group of Christians in the Vallée de Joux region of French-speaking Switzerland decided to try to bring Switzerland’s murky Holocaust past to light by recognizing people like Naf, who had been heroes. Joel Reymond, a local journalist and head of the not-for-profit Association les Passeurs de Memoire, spearheaded a two-year campaign to raise funds for a monument in the lakeside town of le Pont, a few kilometers from the French border, where much of the “smuggling” occurred.

To his surprise, Reymond tapped into an emerging groundswell of interest among younger people in honoring the Swiss heroes of the war. So on a sunny morning this past September, hundreds turned out in le Pont to view the unveiling. They included the last surviving “smuggler,” 90-year-old Bernard Bouveret, who worked as a forester during the war years.

The weekend commemorations had the feel of a catharsis. These ordinary Swiss who have eagerly taken up the mantel of transparency and introspection can only hope Swiss bankers and art officials will do the same and finally confront head-on their country’s behavior during the Holocaust.

David E. Gumpert is the author of “Inge: A Girl’s Journey Through Nazi Europe” (Wm. B. Eerdmans Publishing Co, 2004).

Switzerland Begins To Confront Its Own Holocaust Past