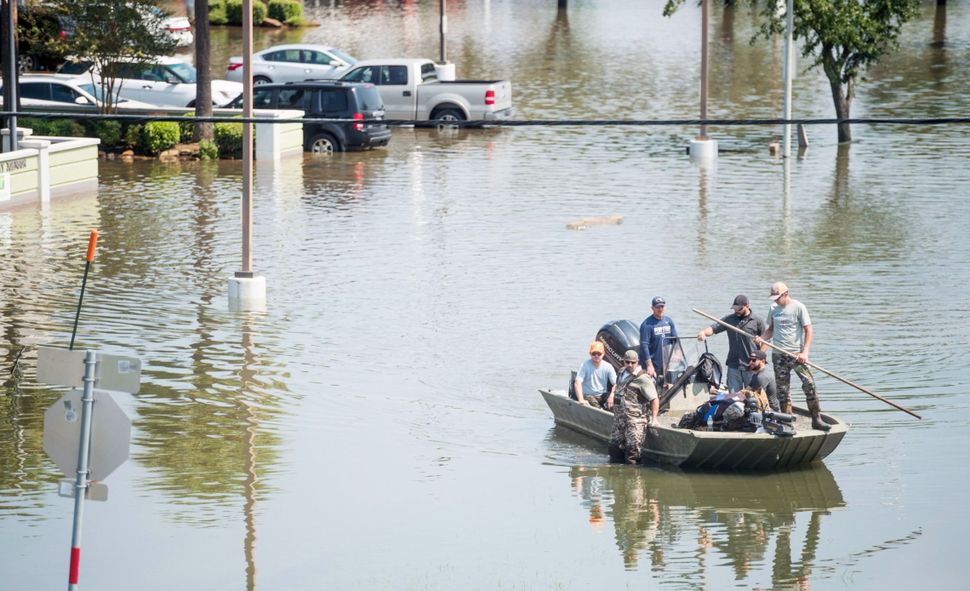 This is a magical time of year. It’s a season of renewal. Right now, folks around the world are gathering to welcome a new year, stepping outside of standard time to inhabit an ancient lunar calendar that follows the moon and the tides. It’s a fraught moment, promising new life in the year ahead even as it demands an accounting for what’s past.

The demand is urgent, relentless. Our new year begins with round after electrifying round of piercing blasts on the ram’s horn, calling us to attention. That’s the kickoff to 10 days of awe and soul-searching, culminating in the merciful forgiveness of Yom Kippur. The day-long fast of atonement reminds us how vulnerable we are to forces beyond our grasp — and yet, how our own actions help to shape our fate in ways we seldom foresee.

Most of us will spend the day of atonement reflecting on our personal struggles and failures. Kol nidre: All our promises, what use are they? But the stakes of the holy day cycle are much larger than our private worries. The season demands that we step outside ourselves and reflect on our collective fate as children of the same creation. This is the meaning of the declaration with which we answer the shofar’s blast: Hayom harat olam — this is the day of the world’s birth; on this day all the world’s creatures face judgment.

Take note, though: Not all of us will offer that precise reply to the shofar’s call. Some, particularly the Orthodox Jews among us, will recite the Hebrew words in the Yiddish-inflected dialect of medieval Ashkenaz: Hayom haras olam.

It’s a tiny change, substituting an S for a T. But this year, it’s all the difference in the world. If you listen to the Ashkenazic “Hayom haras olam” through the Sephardic ears of modern Hebrew, the words mean something different: “This is the day of the world’s destruction.”

The words aren’t new. Neither is the wordplay of T and S, of birth and destruction. This year, though, we have to take it seriously. This year it’s urgent. The earth itself has told us so in no uncertain terms, as only the earth can. It spelled it out for us in a sneak preview of the holiday season done in cataclysmic pantomime, a sort of earthly days-of-awe practice run just before the celestial version. The preview, like the holy days themselves, consisted of a week and a half of shocked reflection, bookended — again like the holy days — by two moments outside of time, moments of immeasurable, unmistakable import.

First, on August 25, the most destructive rainstorm in American history, Harvey. Hayom haras olam: This day we are on the edge of calamity.

Second, on September 6, the biggest, most powerful Atlantic hurricane in all recorded history, Irma. Kol nidre: We are at the mercy of forces beyond our grasp, yet our actions will determine our fate.

Each storm was unprecedented, record-breaking in its own way. Their joint appearance was unprecedented in yet another way: Never before had the North American continent been struck by two Category 4 hurricanes in a single year. The earth was telling us something very important.

And, in case you missed the message, it offered yet another one: a third Category 4 hurricane, Hurricane Maria, striking United States territory just two weeks after Irma with a devastating, history-making force of its own. If two Cat-4 storms in the same year was statistically unprecedented, the third takes us beyond statistics into the realm of metaphysics. Maria arrived on American soil on the very eve of Rosh Hashanah, just in time to rethink our Hebrew pronunciation before the sounding of the shofar.

As for those already accustomed to praying in Ashkenazic, they’ll have plenty of time in the days and weeks ahead to consider what their prayer sounds like to the modern ear. They’ve been saying it, but all too few have been listening to themselves. Yes, this is a time when the world can be born anew. But it’s a time when the world can just as easily be destroyed. We have all the information we need. The science is in; there’s no serious doubt left, except among those who happily lie about it, sowing havoc tomorrow to gouge an extra dollar today. And among those of us who blindly follow the gougers because they wave our flags, flatter us and curse our enemies, and the rest of the world — all of it, and all of its descendants and ours for the rest of time — be damned.

No, the drowning of Houston and the ruin of San Juan aren’t the fault of today’s climate deniers and obstructionists. They’re the net result of carbon pumped into the atmosphere over the past century of industrialization and automobile travel. The carbon we’re burning today will be felt by our great-grandchildren and their great-grandchildren. And they’ll feel it in ways we can’t imagine today.

Over the last few weeks we’ve seen hurricanes of a size and scope we hadn’t dreamed of just a year ago. Some months back, while the scientists were debating whether and when Antarctica might melt and raise sea levels to catastrophic heights, the frozen continent spat an ice cube the size of Delaware into the ocean. What’s happening today was inconceivable last year. What’s coming in a century is unimaginable, yet imagine it we must. We’re at the mercy of forces we can scarcely fathom, but our actions today will determine the fate of our children’s children. This is the day the world is either reborn or destroyed.