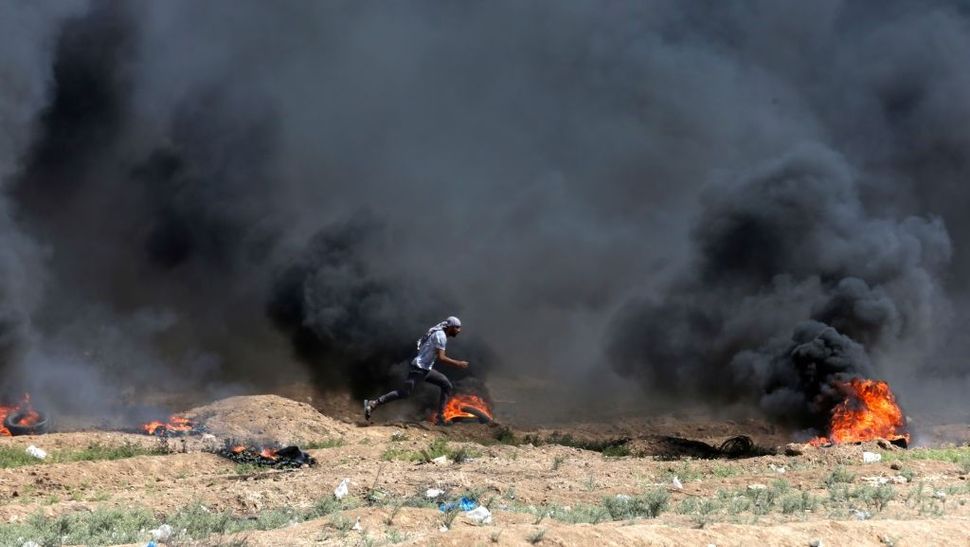 A Palestinian protester runs as smoke billows from burning tyres during a demonstration along the border between the Gaza strip and Israel, east of Gaza city on June 8, 2018 Image by Getty Images

I spend a lot of time online. Probably too much. But, lately, I’ve seen something I haven’t seen before: Israel advocates, people I normally trust, tweeting things that are misrepresented or out of context.

When I contacted them, some said, “Well, it’s close enough, and the anti-Israel discourse is so much worse.”

I responded that it may be true, and that at times we may feel overwhelmed with the accusations made against Israel, but that our stooping to such levels is simply unacceptable. We cannot utilize falsehoods or “close enoughs” when telling Israel’s story.

This war was brought to us and we are doing everything in our power to contain it with minimal casualties. I know this because I know the IDF. I know this because I’ve spoken to people in the field. The deaths that have occurred since the “Gaza Return March” started in March, have been at the border where thousands have rioted, and dozens have attempted to infiltrate and take down the border fence.

And people have been killed – between 60 and 112 to date, depending on who’s statistics you trust, most of whom Hamas and Islamic Jihad claim as members.

Still, in the media, this is described as a massacre. This, despite the fact that the IDF has conducted dozens of airstrikes in Gaza proper in retaliation for mortar shell attacks on Israeli towns — with zero casualties reported.

This is key. If Israel had any interest in “massacring” Gazans, we could do so in a heartbeat. We don’t. We won’t. Israel is interested in protecting her people. That’s it.

Medic Razan al-Najjar was killed at the border and has become the symbol for this march. As there are conflicting reports, we don’t know exactly how she died. Forgive me, but I don’t accept Hamas’s narrative alone. I still recall the “Jenin Massacre” and Muhammad Al Dura — the blood libels that went round the world before the truth won out and no one was listening anymore.

What we do know is that the IDF does not target civilians or medical staff. They simply don’t. Not ethically, not strategically. We also know that when there are thousands at the border, some violently rioting and burning hundreds of tires, some sending kites that have burned over 2,000 acres of forest and field, and some who are throwing molotov cocktails at soldiers, those who are in the area are at risk.

Fires continue to rage in southern #Israel. This video, shot by Dean Sela, shows fires near Sapir college in the city of #Sderot pic.twitter.com/3EC4yJp0KG

I wish people had not been killed. I wish that none of this were happening. But no matter what accusations are flying, we cannot-must not-create false stories. Even if they claim we deliberately targeted al-Najjar, we cannot in turn claim that it was because she was colluding with terrorists, not without concrete proof.

Israel’s story is simple and true. We are defending our borders. We do not target civilians, media or medical staff but sometimes innocents die.

To my fellow Israel defenders: Please, do not share false stories. If you don’t know, ask. If it looks suspicious, wait. Our cause is just; don’t ruin it with lies.

Israel’s story is the same it has been for over 70 years. We want a safe Jewish home in our ancestral homeland and peace with our neighbors and residents.

Don’t take my word for it, take it from Lt. Col. Yoaz Hendel whom I interviewed earlier this week. As he told me,

“Part of my duty is my ethical code. To protect my country, I need to be a moral soldier. Being in Gaza now, this dilemma is personified. When you have a terror organization that sends women & children to the front lines, you try not to harm them in any way. At the same time, you can’t let terrorists cross the border to harm Israeli residents.”

“I was at the Gaza border,” he went on. “I can tell you we did everything we could to avoid casualties. Tear gas, “skunk water”, you name it. But at the end of the day, when people are trying to cross your border and you are between them and your civilians, you do what you have to do. Snipers aren’t bloodshed, they are the way to minimize bloodshed.”

“We must maintain our liberal values even though we are constantly under attack, for over 100 years from our neighbors,” he insisted. “There is a clash of civilizations. I can not convert them, I can only do what I can. I can’t stop wars. I can protect women and children.”

Israelis want peace. More than those 6,000 miles away who think they know what is happening here, it is we who get on buses and look around at the faces next to us wondering where to sit to best avoid death. More than those who sit in cafés and put fire emojis next to their names in righteous protest, it is we who send our children to the army praying they will not need to make the ultimate sacrifice to protect us. And more than those who choose to vilify Israelis, it is we who want our justified desire for a national homeland to not come at the expense of others who desire theirs.

There is enough room in this land for both of us, there are enough challenges to this end goal. Please, let’s not complicate an already complicated situation with further lies and mistrust.