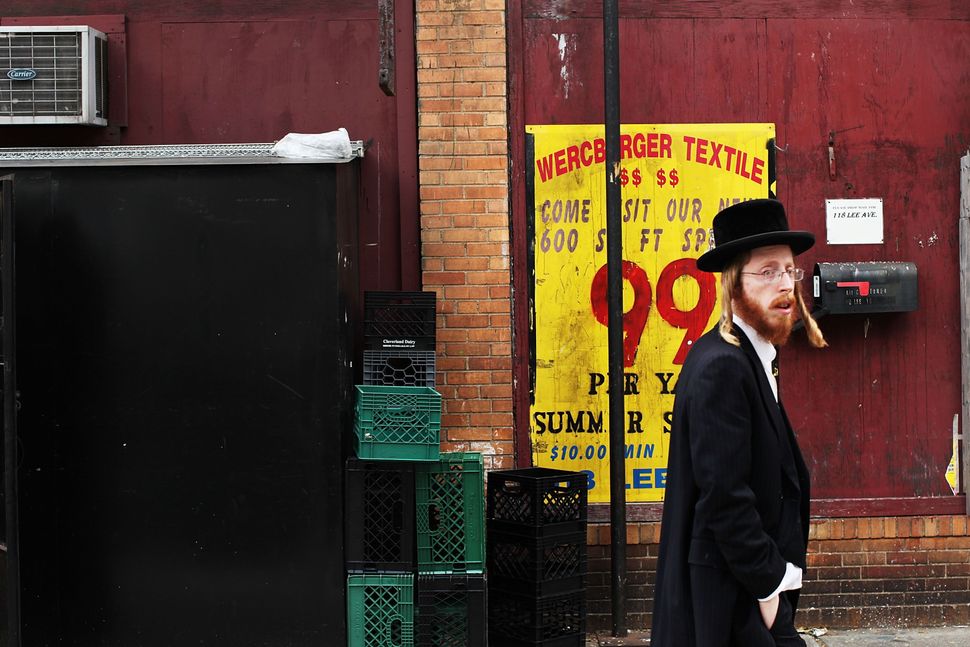 “It makes no difference if one is subjugated by someone with raised weapons,” the ad proclaims, to images of masked, ominous Hamas militiamen with mortars,“or by someone who isn’t prepared to raise a weapon.” Cue shots of a haredi Jew next to a dumpster fire, and a gathering of haredi rabbis on a dais protesting the conscription of yeshiva students.

This ad, put out by Avigdor Lieberman’s Yisrael Beiteinu party ahead of the April election, is shocking in its comparison. And yet, it differs only in degree from what has long been a staple of both Israeli and U.S. political discourse: the vilification of haredi Jews.

Haredi society has long been a convenient pincushion for the jabs of ambitious Israeli politicians seeking the votes of those who dislike the bearded and hatted, the long-sleeved and hair-covered. And here, too, in these United States, haredim have been an expedient target for ambitious American politicians seeking to keep identifiably Jewish Jews out of their neighborhoods.

In a Sept. 28, 2018 Facebook post, Mr. Bradley encouraged residents to call or text him if they “suspect that non-residents are using our Town Parks.”

“If I don’t personally conduct the security check,” he assured them, “I will ensure that the appropriate town employees arrive to perform same.”

“Remember,” he cautioned. “While other municipalities are out to smother all of their open space with abhorrent high-density housing, our goal is to ‘Preserve Clarkstown’ and our beautiful parks!”

Posting his message shortly after the Pittsburgh synagogue massacre, he wrote: “Normal Jews and non-Jews alike were grieving at the JCC while they were meeting ‘the guy with the checkbook.’”

Mr. Bradley’s fellow Rockland County politico, Lawrence Garvey, the head of the county’s Republican party, recently posted on the party’s official webpage the contention that Orthodoxy is “the most egregious example of women’s oppression in our entire country” and that Orthodox women are insufficiently educated and forced into arranged marriages.

It came as surprising news to countless Orthodox women, many of them well-educated and none forced into marriage. But more importantly, it came as welcome reassurance to countless bigots, of which there are many, unfortunately, that their biases are shared by some elected officials.

No doubt, overdevelopment in rural areas is a valid concern and an entirely proper subject for discussion. But no valid concern should ever serve as an opportunity to vilify another group of people.

And yet, you see this againand again and again.

Even someone as rightfully respected as World Jewish Congress president Ronald S. Lauder isn’t immune to bouts of animus toward haredim. Despite his laudable philanthropy, which includes support for institutions that educate Jews overseas about their religious heritage, Lauder made a public statement last year that many of us in the haredi community found particularly jarring.

Again, Mr. Lauder, and anyone, can argue the merits of maintaining or trashing the religious status quo in Israel, which grants religious authority to Orthodox halachic decisors. But labelling people committed to Jewish observance “extremists” should be beneath a Jewish leader. To his credit, Mr. Lauder subsequently apologized in a full-page ad.

No apology was forthcoming, sadly, from Rabbi Eric H. Yoffie, former president of the Union for Reform Judaism, for writing in Haaretz that “the ultra-Orthodox political leadership” in Israel is “destroying the State of Israel.” And, in case readers might assume he was waxing metaphorical, he took care to add “Literally.”

That same paper reported earlier about how some American Jewish Federations had funded an ad campaign conceived by non-Orthodox movements to vilify haredim. The campaign reportedly posted nearly 1000 signs and billboards in Israeli cities, reading, in Hebrew: “We are liberating the Kotel – Enough with haredi domination.”

Subjugation. Capitulation. Domination. Run for your lives, normal people! The barbarians are at the gate!

Again, one can argue for the jettisoning of the religious status quo in Israel, in law or at the Kotel. But it can be done without incitement or demonization.

Compounding the effects of anti-haredi animus is how the community is ignored in other contexts where it shouldn’t be.

Assaults on Orthodox Jews in Crown Heights and Borough Park have become almost commonplace of late – 15, at last count, since mid-October, in the former neighborhood alone. And almost no one outside of the Jewish media cares to even report on it.

Where one does find considerable coverage of the haredi community is when one of its members is accused of doing something wrong or has actually committed a crime. That would be fair enough if there was more coverage in the general Jewish media and non-Jewish media of the community’s myriad laudable acts and educational outreach to other Jews.

But when attacks on haredim are ignored and the community shows up exclusively in reports of accusations or wrongdoing, well, that inexorably leads to generalizations.

Yes, we have our ethically and morally challenged members, like any group. But isn’t the essence of prejudice the generalizing from a group’s worst examples to the entire group?

The vilification of haredi Jews should horrify all good people.