Menu
HomeA New Prayer For The United States, In A Time Of Trial
Image by Getty Images

Since the time of the first exile, when the Jews found themselves in a foreign land and subjects of a foreign government, it has been the Jewish custom to pray for the welfare of the state in which we found ourselves. The source for this custom is found in the prophet Jeremiah, who wrote, “Seek the welfare of the city to which I have exiled you, and pray for it, for your welfare depends on its welfare.”

Through most of Jewish history, Jewish communities lived separate and among themselves, with little intimate interaction with the non-Jewish community. Their fortunes in the states in which they lived depended on the toleration and favor of the government toward their community; and because these were generally monarchies or principalities, on their good relations with a king or a potentate. It is not surprising, then, that most of the prayers uttered in synagogues sought primarily God’s blessing for the government, singling out kings and princes for special attention.

With the Emancipation in the late 18th and early 19th century, Jews’ position in the west fundamentally changed. No longer were we a tolerated foreign element. We were invited to become full citizens of the nations in which we lived, voting in the election of leaders and participating fully in the functioning of the instruments of government. While the promise of full integration was often and tragically betrayed in Europe, in the United States the promise has, more than anywhere else, been kept. American Jews fully identify as Americans, and our Judaism and Americanism often work in tandem to create a uniquely Jewish American civil religion.

It is no surprise, then, that the prayers uttered in most American synagogues for the United States are quite different from the traditional formulas. As Jonathan Sarna has remarked, “While the traditional prayer assumed Jewish dependency and curried favor from the ruling authorities, these new prayers exude self-confidence and offer direction to the ruling authorities on how to do their jobs better.”

So, for example, in 1927 Louis Ginzberg of the Jewish Theological Seminary beseeched God to “Pour out your blessing on this land, on its President, judges, officers and officials, who work faithfully for the public good” and continued with a blessing for a peaceful citizenry at a time of rising nativism and white supremacy: “bestow Your spirit on all the inhabitants of our land, and plant love, fellowship, peace and friendship between the different communities and faiths that dwell here. Uproot from their hearts all hate, animosity, jealousy and strife, in order to fulfill the longings of its people, who aspire for its dignity.” In the later version of Ginzberg’s prayer recited in most Conservative synagogues today, the reference to the President has been removed in favor of “its government, for its leader and advisors, and for all who exercise just and rightful authority.”

Beginning with Ginzberg, the blessing recited in Conservative synagogues has taken on a three-fold structure: The first section asks for the welfare of the US government; the second for peace among the citizens of the country; and the third, invoking the words of Isaiah, echoes the internationalist version of American exceptionalism, asking the United States to play a special role in the establishment of world peace (“may it be God’s will that our land be a blessing for all who live on earth.”)

R’ Jules Harlow, in his 1985 revision of the blessing, singled out (in English only) “the ideals and free institutions that are the pride and glory of our country,” refining even further those distinct features of the American experiment that are worth preserving (and bringing home that America is our country as much as anyone’s).

Since the 2016 election, however, I and many who daven in synagogues that use R’ Harlow’s prayer have begun to feel that it is inadequate to the political climate, and the sense of emergency shaking America.

I don’t feel I can pray for Donald Trump as he systematically seeks to unsettle and dismantle all those features of America—a common American creed, a constitutional order rooted in separation of powers, and respect by the executive branch for the judiciary and the legislature — that are central to the American creed, and have been fundamental in securing the wellbeing of minorities, including Jews, in America.

Nor can I casually ask that “citizens of all races and creeds forge a common bond in true harmony, to banish hatred and bigotry” when it was the open embrace of hatred and bigotry that swept the president into office — and when, on his watch, neo-Nazis are on the march, chanting threats against Jews and migrants, and gunning us down in our synagogues because of our love for the migrant.

Prayer | A New Prayer For The United States, In A Time Of Trial

And, most of all, this administration’s savage and sadistic treatment of undocumented migrants, its policy of deterring immigration by torturing families and separating children from their parents, is not merely a betrayal of American norms of decency and history as a place of refuge: It has put me in mind of the wicked kingdom of Sodom, as understood in the rabbinic tradition.

Sodom, we learn, was a bountiful and prosperous society that despised the “wayfarer” — that is, the migrant — because, well, “Sodom first.” So it adopted sadistic policies both toward migrants and those who sought to aid them in order to deter migration. How, when I see Sodom in our policies along the southern border, in the prosecution of people bringing migrants water and food, in the terrorizing of millions of people who fled to the United States as a place of refuge out of a hope for a better life, how can I utter a normal prayer “that peace and security, happiness and prosperity, justice and freedom may forever abide in our midst”? As Isaiah wrote: “There is no peace, says the Holy One, for the wicked.”

With this tradition and these thoughts in mind, I composed my own prayer for the country. It draws not only on the earlier blessings, but on two other major sources: First, two cornerstones of the American Jewish creed: Emma Lazarus’ “New Colossus” (along with an early Hebrew translation of it), which articulated the Jewish hope that America would be a refuge for the persecuted of the world, and President George Washington’s Letter to Touro Synagogue, promising the “stock of Abraham” that our presence in America would not merely by tolerated “as if it was by the indulgence of one class of people, that another enjoyed the exercise of their inherent natural rights,” but that the Government of the United States would actively protect our status as full citizens, and “give to bigotry no sanction, to persecution no assistance.” (Trump broke this promise, of course, when he refused to condemn the Jew-hating neo-Nazis who marched in Charlottesville).

The second major source for the blessing is the Torah’s insistence that a just society be especially concerned for the welfare of the vulnerable and powerless — above all the orphan (who has no adult supervision), the widow (who, lacking a husband, has no legal protected status) and the ger, the migrant (who, fleeing hardship, far from home and among strangers, depends on the basic decency of the people for his survival). Though it seemed excessive to include the punishment for abusing the vulnerable in the blessing itself, I encourage everyone to read Exodus 22:20-23, and shudder.

I have preserved the prayer for the “ideals and free institutions that are the United States’ pride and glory” and translated the felicitous phrase into Hebrew. Now more than ever it feels important to single out this essential feature of the United States, as it is being tested perhaps more than at any time before. I no longer feel as confident, however, referring to the country as “ours.” We remain citizens of the country; but we have been made to feel, for the first time in our American experience, outsiders and foreigners, and I wish to honor that feeling in the language of the prayer.

Finally, the last paragraph attempts subtly to invoke a teaching by R’ Naftali Tzvi Yehuda Berlin (“the Netziv”) on the sin of Sodom. Why, he asks, was Sodom condemned to be utterly destroyed in a rain of hellfire? Because, he explains, “one of the basic elements of God’s purposes in creating humanity was that brotherhood should prevail between all human beings.”

In practice, that means that we each are responsible for providing for one another, as Cain was able to provide for his brother Abel, and welcome the migrant into our territories. It is, he wrote ישוב העולם, שיהא האדם מתהלך ‏ממקום למקום — the proper way the world should be settled, that human beings will migrate from place to place. And Sodom undermined this, thereby “perverting human nature, by which each person is a brother or sister to his fellow.” It was for this reason that God utterly destroyed them. For this reason, the blessing asks that we learn to recognize that we are brothers and sisters to one another, not strangers, in the hopes that we relent from our cruelty toward migrants, and escape the fate of Sodom.

Click here for a printable version of the prayer.

Rabbi Joe Schwartz is an entrepreneur in the Jewish space. He is in the process of building IDRA in Brooklyn, NY - a house of coffee and Jewish / Hebrew Culture that aims to recover the café as a home for the Jewish community. 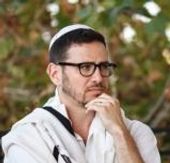 Rabbi Joe Schwartz is a native of New York City. He grew up on the Upper West Side, holds a BA from Columbia College and a JD from the NYU School of Law. Rabbi Schwartz was ordained by the Ziegler School of Rabbinic Studies at the American Jewish University. He is the grateful husband of Alyson and father of Zev.

A New Prayer For The United States, In A Time Of Trial