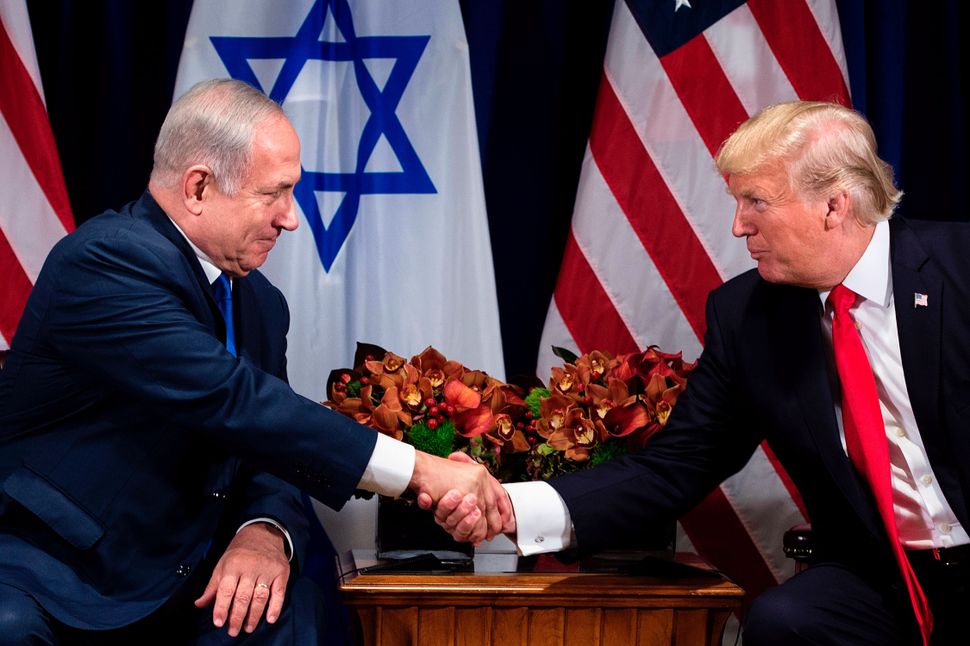 Benjamin Netanyahu’s favorite historical figure, Winston Churchill, famously said, “To build may have to be the slow and laborious task of years. To destroy can be the thoughtless act of a single day.”

Nobody embodies this aphorism better than President Donald Trump. Whether it be his torching President Barack Obama’s Iran deal, dismantling the Republican Party’s orthodoxy on tariffs and free trade, or reconfiguring the conception of post-World War II alliances among Western states, Trump has an uncanny knack for destroying what he does not like.

His “deal of the century” for Israeli-Palestinian peace, released today at the White House with Netanyahu by his side, is the ultimate manifestation of this talent.

What Trump has destroyed today is not Israeli-Palestinian peace or a two-state outcome; it is the long-held idea — by many, including me that we know what the contours of a deal will look like, and only need to wait for the right leadership on both sides to have it realized.

Nobody should be any under illusions that the Trump vision presented today is going to lead to a deal. The Palestinians are hunkered down so deep in their bunker that President Mahmoud Abbas refused to take Trump’s call yesterday, and the prospect of them coming to the table is closer to non-existent than it has ever been.

Even on the Israeli side, with a proposal that is literally the most generous that Netanyahu or any Israeli prime minister could hope for, there is not a clear path forward.

Within Netanyahu’s camp, settler political and religious leaders came out against the deal on Monday before it was even released. Outside of it, Benny Gantz’s statement on Monday was as artful a dodge as has been crafted, thanking Trump and praising his vision while promising to move forward upon it in consultation with the Palestinians and Jordanians — the two parties least likely to acquiesce to any of it.

There will be no triptych photo-op, no signing ceremony on the White House lawn, no handshake between and Israeli prime minister and a Palestinian president.

But the futility of this particular effort is ancillary to the real point. As resilient as the Clinton Parameters have been for two decades, the Trump initiative has destroyed them.

For the first time, the United States has unveiled a map with precise borders, and an Israeli leader has endorsed it. That map is a maximal vision of Israeli territorial control in the West Bank and Jerusalem, and it is hard to see any future Israeli leader walking it all the way back to the Ehud Olmert, or even the Ehud Barak, position.

Israeli expectations have been permanently reset, and the trajectory of the Israeli position moving closer to the Palestinian one with each successive round of talks is over. Trump has destroyed any remaining hope that Israel will settle for the deal that peace processers have envisioned for a quarter century. In fact, Trump’s vision is weighted so far in one direction that it makes any deal at all hard to envision, particularly if Israel actually goes through with the annexation scenario that Trump has now greenlit.

On the other side, the Palestinians’ consistency over three decades has been remarkably unwavering. They view acceding to the 1967 borders with equal swaps — thereby giving up 78% of their original goal of the entirety of Mandatory Palestine — as their historic compromise, and have not budged from that position.

That strategy worked for awhile, as Israel began to shift closer to where the Palestinians were, but Trump has destroyed the efficacy of that too.

The Palestinians may take longer to acknowledge the new reality — and if yesterday’s reports of Abbas refusing to take Trump’s call and using some choice epithets for Trump at a PLO Central Committee meeting are any indication, they aren’t exactly on their way — but the strategy of holding firm until everyone else comes around is no longer viable.

The Palestinians have counted on American presidents to hew to the old parameters and the Arab world to back them up. Now that Trump has demonstrated how easy it is to subvert that expectation, the Palestinians will have to figure out how to operate in a changed environment. Rather than operate within a negotiations context, they now have to maneuver in the waters of annexation.

On the U.S. side of things, Trump has done here what he has done on so many other foreign policy issues, which is to destroy any vestige of a bipartisan consensus.

Despite the fact that President George W. Bush solidified the Clinton Parameters even further by becoming the first president to endorse a Palestinian state and pursuing a deal largely along the same lines, nobody should expect future Republican presidents to return to the status quo ante.

On the Democratic side, just as Trump’s modus operandi has been to repudiate anything his predecessor did, future Democratic presidents will treat Trump policies and preferences similarly. Whatever Israeli expectations from the U.S. have been, those expectations will be upended when the Oval Office changes hands.

The upshot of all this is that the idea that we know what a future deal will look like — Israel keeping only large settlement blocs on the Green Line with equivalent land swaps, two capitals in a reasonable definition of what constitutes Jerusalem, compensation and some very limited return for Palestinian refugees — can no longer be assumed with any confidence.

While such an outcome represents the one that will deliver the most absolute gains for the two sides in tandem, whatever emerges from the wreckage of the Trump process may look completely different.

The way we think about Israeli-Palestinian diplomacy, and the contours of whether a deal is ever possible, has now been shattered, all because of Trump’s preternatural ability to break things and leave the pieces in his wake.