What Sanders’ shellacking in South Carolina means for the race 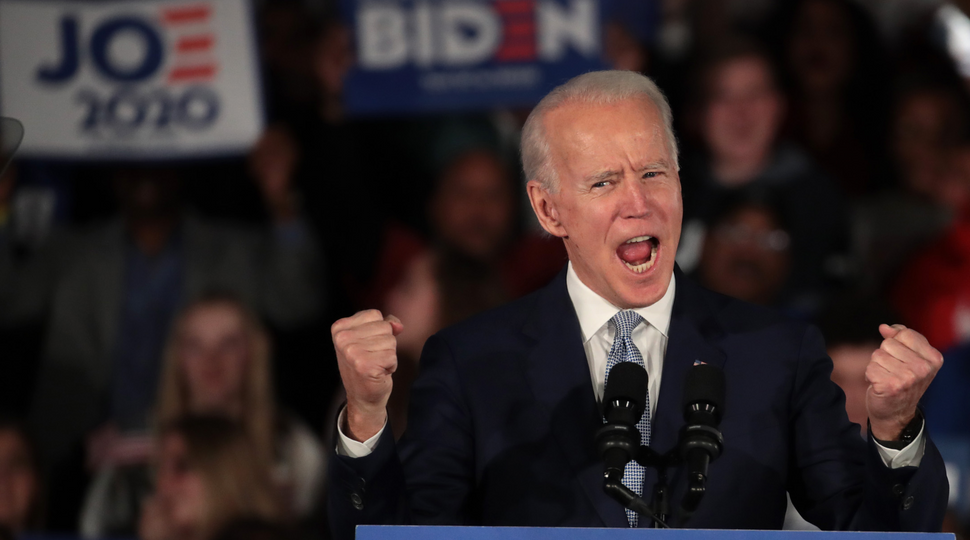 FEBRUARY 29: Democratic presidential candidate former Vice President Joe Biden celebrates with his supporters after declaring victory at an election-night rally at the University of South Carolina Volleyball Center on February 29, 2020 in Columbia, South Carolina. The next big contest for the Democratic candidates will be Super Tuesday on March 3, when 14 states and American Samoa go to the polls. (Photo by Scott Olson/Getty Images) Image by Getty Images

On Saturday night in South Carolina, former Vice President Joe Biden scored a resounding win against the rest of the Democratic Primary contenders. The candidate ended the night with 48.4% of the vote and, it wasn’t even close; Biden’s closest competition came from Bernie Sanders, who finished nearly 30 points behind him.

Black voters have been Biden’s strongest demographic since he announced his candidacy last year. But after poor showings in the first three contests, doubts began to arise about how he would perform in South Carolina. But after a pivotal endorsement from Jim Clyburn, polling in the state began to break Biden’s way.

Still, nothing prepared analysts for how much Biden would overperform even the most optimistic predictions. The RealClearPolitics polling averages had Biden winning by 15.4%, but he ended up winning close to double that — 28.5%. And Biden didn’t lose a single age group of Black voters; he won Black voters over 60 by 65%, and tied Sanders with Black voters under 30.

This was perhaps the biggest shock: Sanders spent three years organizing and spending in the state to improve his standing with black voters in South Carolina, and yet, his vote share of the demographic effectively remained unchanged from 2016. Biden won black voters by a massive 50 points.

Black voter preferences shift from state to state; in 2016 Sanders did much better w them in Midwest than in South. But he spent years working SC, organized HBCUs, etc, to go from 14% to 15% w black voters. Clyburn just knocked the wind out of him. https://t.co/QsDdddTpnw

The Sanders’ campaign and its aligned media have long struggled to reach black voters, especially in the South. But instead of analyzing their failures, they instead blame black voters. They explicitly or implicitly suggesting that black voters in the South don’t understand which candidates actually supported their interests. “The relationship older black voters have with institutional racism will be forever perplexing for a turkish boy like myself,” was a typical condescending comment, common of Sanders supporters on Twitter.

If Biden wins S.C., it will be in part because of black voters — many of whom have been reckoning with America’s racist past — AND PRESENT — longer than some of their critics have been alive pic.twitter.com/QUsAxzUjEW

And it’s not just on Twitter. Nina Turner, a co-chair of Sanders 2020 campaign, wrote an op-ed in South Carolina’s The State arguing that Bernie Sanders had stood up for black voters while “Joe Biden had let us down.”

The truth is, black voters showed up for Biden when his campaign needed them, giving him a huge boost that will help him jump in the national polling averages just as Sanders’ performances in New Hampshire and Nevada helped him. And if Biden gets a national polling bounce and does well in southern states on Super Tuesday, then he will get an influx of cash and be able to compete for the rest of the calendar.

Biden has already raised $5 million since his win in South Carolina, and close to $18 million in February overall. If Bloomberg performs poorly on Super Tuesday, his supporters could move back into the Biden camp.

While Sanders currently leads the pledged delegate count, Biden leads the national popular vote. This is a convention scenario that pollster Nate Silver believes reporters should start considering more. Both Biden and Sanders have other candidates in their ideological lanes that are eating into their vote share — Warren for Sanders, and Bloomberg for Biden.

But increased scrutiny of Sanders’ record could make it difficult for him to run away with a majority. Just last week, Florida Democrats distanced themselves from Sanders’ perceived praise of former Cuban dictator Fidel Castro.

Electability concerns have also become a more salient issue for voters, especially as analysts consider the preferences of the suburbs that powered Democrats to their 2018 midterm victory. If no candidate can achieve a majority of pledged delegates on the first ballot of the convention, then superdelegates are allowed to vote on the second and any subsequent ballot, known as a contested convention.

Contested conventions can be quite unpredictable, as candidates attempt to form coalitions and make deals in order to secure the necessary delegate majority to become the nominee. There is no recent history to suggest how such a process would go for Democrats.

Although some will call for the plurality winner to be the nominee, others will call for superdelegates to decide who is the best candidate to run against Trump regardless of how the primaries turned out. In fact, that was Sanders’ (and his surrogates) argument in 2016, when they asked the superdelegates to overturn Hillary Clinton’s pledged delegate majority.

Superdelegates are the epitome of the establishment — party insiders and elected officials. If no candidate is strong enough to amass a pledged delegate majority, then those are the people who could be deciding the Democratic nomination.

What Sanders’ shellacking in South Carolina means for the race